My PII-233 HP Pavilion came with a Quantum Big Foot. If the real Bigfoot made this much noise, we would have found him a long time ago. 🙂

The hard drive version is particularly noisy and responsible for getting me to think about how to build a quiet computer.

I started by building a water cooled 1.4 Ghz Athlon. I thought watercooling would be the Holy Grail. Perhaps had I used holy water it would have been, but by now I was sensitized to noise and even the Panaflows were too noisy.

I tried stuffing my Fong Kai case with carpet padding to cut the noise but it didn’t do enough.

Make no mistake, the water and padding helped, but by now it wasn’t enough. The Athlon pumps out about 3 times as much heat as the PII ever did, and you have to move air to cool the radiator.

Add to the din a 7200 rpm hard drive, a faster CD-ROM, chipset fans, a video card fan and I was almost back to where I started. Quiet components help build a quiet computer, but if you want a fast machine, it’s going to make noise.

I spent a lot of time looking at alternatives and kept on coming back to a problem a friend of mine has. He bought a Mac Cube and loved it, except for the video. The video card wasn’t up to snuff, so he upgraded.

Sure enough, the video card had a fan and so his silent cube is silent no more.

And that, in a nutshell, is what drove me to my box. 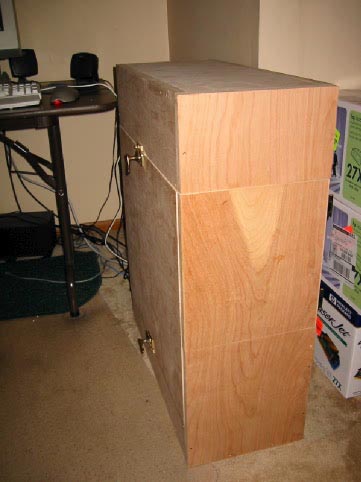 More of My Box…

Big isn’t it? Inside the box is a Fong Kai tower. As you can see, the tower barely fits. 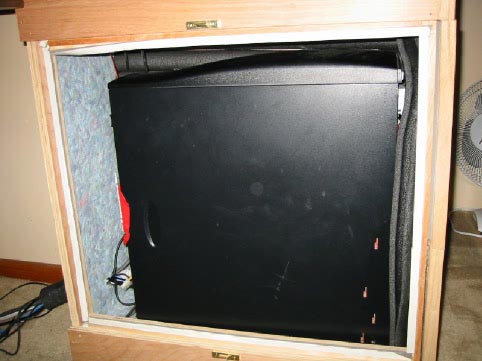 To give you an idea of how things fit at the back of my box, here’s a rear-view close-up: 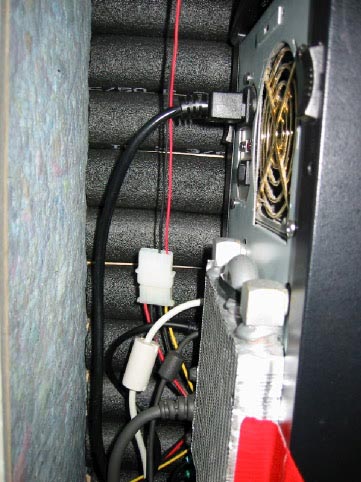 Notice the radiator on the outside of the case. I was trying to reduce the heat load on the CPU by getting it as far away from the CPU and the hard drive as was reasonable and figured outside the case was better than inside. I’m not sure it made that big a difference but that’s my story and I’m sticking to it.

The box is designed to pull air in from the bottom of the case, pass the air through the tower and exhaust it out the top. This schematic might give a clearer picture of the flow.

I was hoping to use the radiator and power supply fans to ventilate the box but it was not quite enough. The computer would gain about 2 degrees an hour until I’d shut it down when the mobo thermistor hit 45C. Anything above that and the machine would start randomly crashing. To keep ahead of the temperature creep, I added a 21 cfm Panaflow at the topside exhaust hole. It’s doesn’t add a lot of air flow but it’s enough. 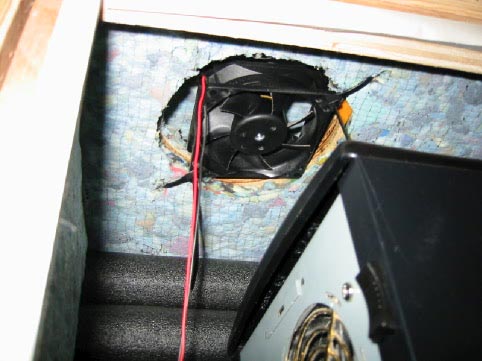 Fortunately, the Enermax power supply has extra long power lines so getting power to the external fan wasn’t difficult.

Besides adding the fan, I had to remove the Fong Kai’s front bezel and stuff some pipe insulation around the intake vents. 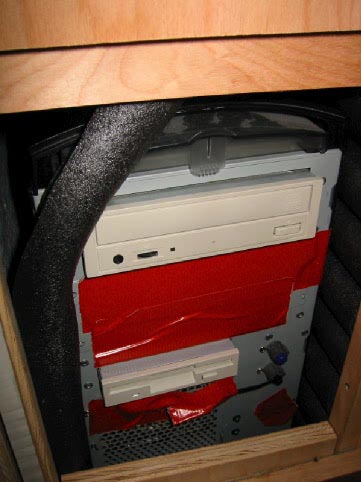 The basic idea is to reduce the number of obstacles to getting cool air into the Fong Kai while ensuring that only cool air is sucked into the box. Without the pipe insulation, the tower was recycling some of the hot air from inside the box.

The insulation is an ad-hoc baffle. If I were to re-build the box, I would add some wooden baffling to provide a better seal and to make it look a little better.

The red masking tape on the front of the tower is also meant to keep the hot box air out.

The white tape on the door is weather-stripping and is primarily intended to reduce the amount of noise escaping through the front door. It’s surprisingly effective.

You can see from the picture that I wasn’t very good at getting the pipe insulation snug. That’s probably a spot where I could improve the soundproofing.

The carpet padding was not only thinner and denser, it was easier to cut and position. Density matters when it comes to noise. As a general rule, it takes more power to move a larger mass. The heavier the material is, the better it’ll be at stopping sound.

Ridding Myself Of Rattles…

To get inside this kind of box easily, you need a front and a side door. When I first installed the side door, it rattled badly. To stop the rattling, I added some weather stripping which kept it from shutting. This required a take-apart so I could use a router to gouge a strip for the weather stripping. 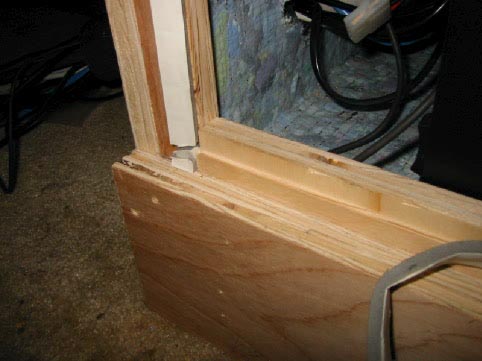 I’ve pulled the weather stripping back so you can see the routing cut. The picture also shows how I put the case together, and how my box got screwed by the screws.

I used a self-sinking wood screw that left small holes on the side of my box. The larger holes were a result of believing the screw manufacturer’s claim that the screws would self drill as well as self sink. They ended up gouging instead of drilling.

I opted for screws over glue and clamps because I knew I was going to have some reason to take the box apart once I’d worked with it for a bit. Sure enough, the door rattle vindicated that choice. If I were to assemble hundreds of these, I’d opt for glue and clamps, but for a one-off, give me screws.

No story is complete without a tail and here’s mine… 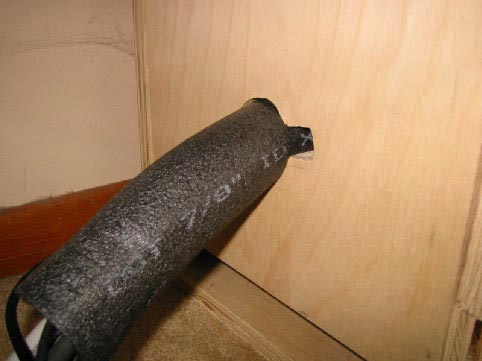 All that extra insulating pipe came in handy when it came time to plug the cable hole. Discovering that pipe insulation can double as a cable organizer was pure serendipity.

Notice the little rectangular cut on the side? It’s for the printer cable. I’ve hated the Centronics connector ever since I first saw it 1978 and the need to widen that hole did nothing to change that. Centronics is gone and buried, but that awful printer connector will outlive us all.

Was It Worth It?…

So you might wonder “Was it worth it?” Temperature wise, when I’m doing something like writing this article, the mobo says the
temp’s around 36 C. When we’re grading children’s tests which entails a lot of OCR and heavy disk access, it’ll get up to 40 C.

The children’s tests are why I wanted the speed in the first place. The Athlon can read 90 handwritten responses on a basic arithmetic quiz in 3 seconds. The old HP would crank for 14 seconds on the same task. Given that we handle around 500 tests every weekend, you can see we have a need for speed.

In terms of noise, I wish I could tell you that my 1.4 Ghz Athlon is as quiet as a Mac Cube but I can’t. When I come downstairs to work
at 4 in the morning, I can hear the water pump chugging away even though it’s buried inside an aluminum case that’s wrapped inside
1/4″ neoprene that’s inside a steel tower with 3/8″ carpet padding inside a 3/4″ thick wooden box with 3/8″ carpet padding on it. Despite
all that…the little pump makes itself known.

There’s an IBM 7200 rpm drive that has a small 21 cfm Panaflow blowing air over it but the only noise that makes is a slight rumble when the heads move. Not counting the chipset and video fans, there are three
other fans – one for the radiator, one for the PSU and one for the case exhaust.

On the other hand, this computer, complete with baroque box, beats the pants off the old HP PII in terms of noise and performance. The noise is down from screech to scratch, and unlike my friend with the Mac Cube, I don’t have to hesitate to add something to the computer – the box will probably handle a little additional noise.

If you’d like to build your own box, here are the dimensions of mine. Remember to route the side door stops before you install them and if you’re especially adventurous, you might want to add some wood baffles to the front side.

I found 4×8 foot 3/4″ birch cabinet grade plywood at Home Depot for $45. Particle board might be a better choice in terms of deadening the sound but again, I knew I’d be using screws and particle board doesn’t let you unscrew a screw too many times. Here is the cut diagram.

The weather-stripping, latches, hinges and carpet padding added another $30 or so to the cost. I’ve a friend who lent me his wood shop but, lacking that, you could probably get a cabinet maker to cut the lumber for around $25. Getting the cuts right is crucial. Once the lumber was cut, I drilled all the screw holes with a hand drill and still managed to get the case square.

Intel will cut prices May 26, bringing a few more PIV Northwood into the typical O/Cer’s budget. Based on studying CPU databases, both ours and others, I came up with this little chart which summarizes your likelihood of success with

I just got a new IBM 75GXP last week and it is an incredible upgrade from my old 5400 rpm drive. But all that extra speed generates more heat than a slower drive. I wondered just how hot it was

SiSoft Sandra 2003 has just come out. Here’s the download page. The CPU Benchmark test yields much different scores than the “old” Sandra. PIV Northwood scores get a little over 40% boost in ALU, a little less than 10% FPU: