In this installment of our CES product tour, we enter the massive Kingston/HyperX showcase. Everything from gaming peripherals to memory to SSDs were on display. Highlights included the upcoming Cloud Revolver gaming headset and Predator NVMe M.2 SSD.

Although Q2 seems like a long time from now, the HyperX Predator NVMe M.2 PCIe SSD will be worth the wait. In the demo, a 480 GB prototype drive showed some impressive speeds of 1775 MB/s sequential read and 1675 MB/s sequential write. Details were not divulged about the controller or detailed specifications.

HyperX Cloud Revolver looks to build on the success and quality of the previous HyperX headsets. This, however, is the first headset designed completely in house by HyperX/Kingston. It will feature a detachable mic, improved comfortable fit and 50mm drivers. Two versions will be released, likely in Q2, starting with a 2.1 stereo model, followed by a 7.1 USB version later on. No official pricing was available, but MSRP will likely be around $120 for the 2.1 and $150 for the 7.1 USB.

In other headset-related news, HyperX was named an official XBOX ONE partner, so we also got a chance to check out their compatible headset as well.

No major product releases are coming for memory in the near future, but HyperX did refresh their Predator DDR4 line. The new sticks are outfitted with lower profile heatspreaders and a cool new design with speeds of up to 3000 MHz and capacities (kits) to 64GB.

Kingston was also showing off two new wireless devices, the MobileLite Wireless G3 and MobileLite Wireless Pro. Both have built-in charging capabilities for mobile devices and allow you to stream files to several different mobile devices simultaneously via USB device or SD card. The pro version has 64GB of storage onboard and a larger 6700 mAh batter (vs. 5400 mAh on the G3). These should hit the stores by February at $50 for the G3 and $100 for the pro version. Below is a photo of the MobileLight Pro on the right streaming to a tablet on the left. It was pretty smooth if I do say so myself! 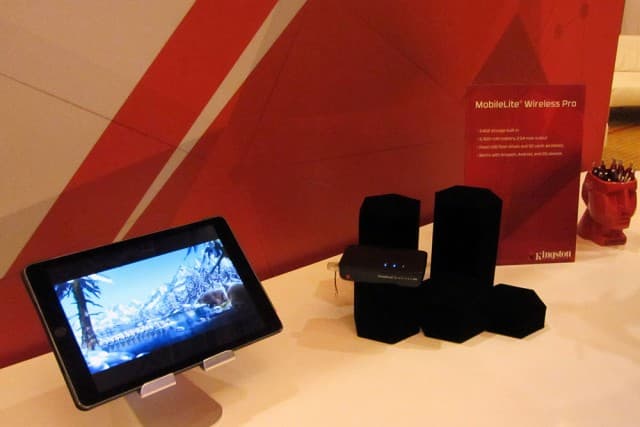 We’ll leave you with an awesome build showcasing HyperX memory and SSD’s in a sexy, and robotic, In-Win H-Tower “Transformer” case (more to come on that in a future CES article).

That’s all from HyperX and Kingston, but we will have a few more product roundups before calling it a wrap on this year’s Consumer Electronics Show.

In our next meeting at CES 2016, we swung by AMD’s ballroom and had a chance to meet with Robert Hallack, the Head of Global Technical Marketing for AMD. In this meeting, he discussed a myriad of topics ranging from AMD’s new GPU architecture, named Polaris, to the new HDR technology. Read More

Our next stop in covering CES 2016 was with the fine people at ASUS. Raja lead us around their suite showing off all kinds of new goodies from the new Z170 Maximus VIII Formula, 970 Pro Gaming/Aura AMD board, gaming peripherals and even an external graphics docking station, the ROG XG Station 2. Read More

The Intel Developer Forum (IDF) event begins today, and we have the first of what is likely be many news releases to share. Kingston will be showing off it’s new DDR4 memory and give people a sneak peek at their upcoming NVMe M.2 PCIe SSD during IDF 2015. Here is the press release we received this morning. Read More