SUMMARY: Copper foam as a heatsink material continues to tantalize.

I reported earlier on using a metallic copper foam material in a Copper Foam Heatsink. Test results were encouraging, especially considering the small footprint of the heatsink, for 1U applications.

I received emails asking about other design configurations and we decided to try another pass with this one: 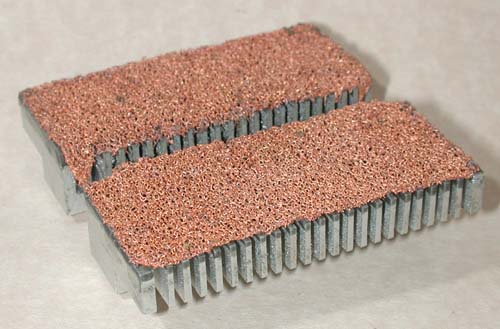 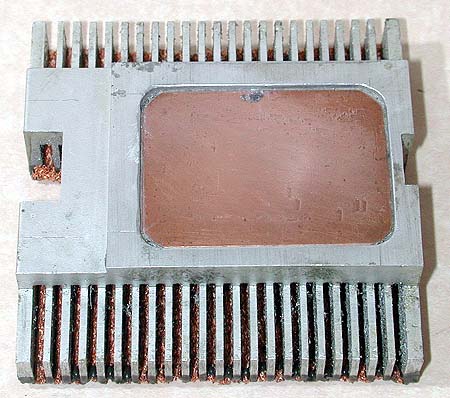 This was adapted from an existing heatsink featuring a copper base and aluminum fins. The copper foam was applied onto this base. With more surface area of the copper foam exposed to airflow through the fins, it was supposed that this would be a good performer.

This test used the CPU Die Simulator which gives results that are unaffected by motherboard influences. This is a small die test and typically results in higher C/Ws than with the P4 rig. I used a 15 x 70 mm, 4200 rpm, fan mounted directly on top of the copper foam.

Not a barn burner, but what I found interesting is that taking a look at similar C/Ws in the Heatsink Ranking, the copper foam heatsink held its own against some larger units, and then some. As a possible 1U solution, an optimized copper foam heatsink could have some merit for space constrained applications – possibly turning in a C/W around 0.40.

An interesting material – optimization will most likely require some “out of the box” thinking, but the potential for a very competitive, small heatsink appears bright.

However, a number of readers have noted that dust clogging could be a problem with this material due to its density. We thought about this and I would think that some type of dust filter over the fan would help.

AMD plans on writing good Linux video drivers from now on. I find it strangely difficult to disapprove of this; it’s like being for world hunger. 🙂 If you want to get a preview of what these drivers promise to

There’s lots of XP1900+ reviews out there. Essentially, you pay AMD $70 for the privilege of getting a 12X multiplier rather than an 11.5X multiplier and about a 3% improvement. From all appearances, outside of the abovementioned, they don’t seem

Extremetech did some behind-the-scenes testing and found that “our test results seem to indicate that nVidia is boosting its 3DMark game test scores by cutting corners in the 44.03 DetonatorFX driver we used for testing.” nVidia is calling this a