One of the factors that’s very difficult to control and measure in grease testing is grease thickness.

Typical testing on a CPU platform does not control for this factor and as such, results are a mixture of the grease’s thermal performance and its thickness as applied. Without compensating for the thickness of each sample, it is possible that a grease with lower thermal conductivity will perform better than one with higher thermal conductivity.

To correct for grease thickness, thermal bulk conductivity and thermal impedance, a specially designed and built calorimeter was used. This is a precise instrument that cost about $75,000 to build. 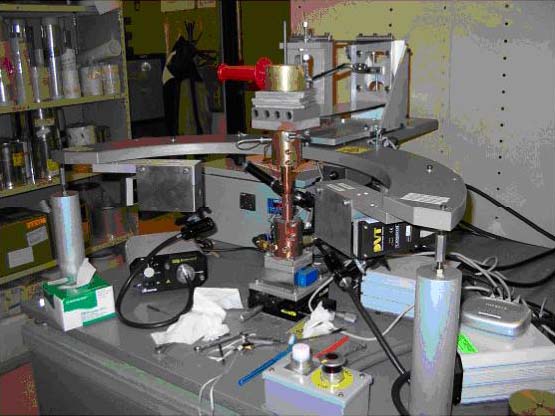 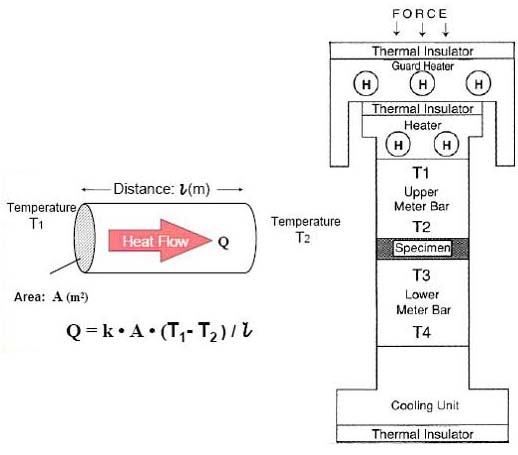 As an example shown below, four greases were tested – two commercially available greases and two new formulations using diamond and aluminum powders. Both conductivity and resistance are at the same bond line of 100 microns. First bulk thermal conductivity was tested: 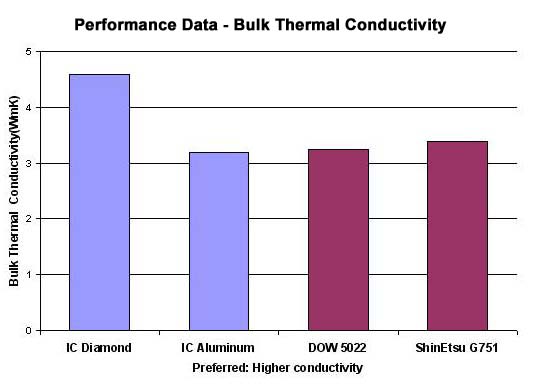 Diamond comes out ahead on this comparison – not a surprise considering the thermal conductivity of diamond – up to six times that of silver. Next the samples were mounted on the calorimeter and adjusted to the same thickness for each – the same bond line: 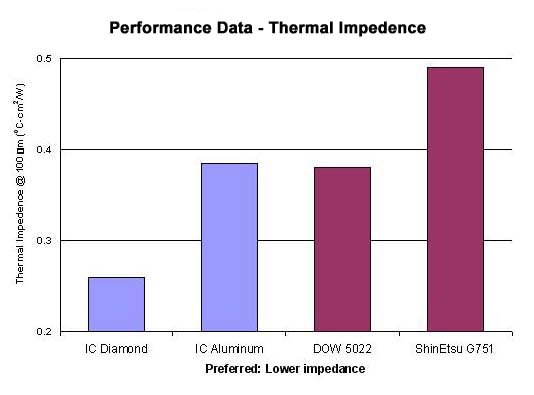 Some interesting data was acquired when a couple of off the shelf retail thermal grease samples were compared that had relatively low bulk thermal conductivity, yet at the same time are not bad performers when applied. This apparent contradiction was solved when bond line thickness was taken into account in the testing: 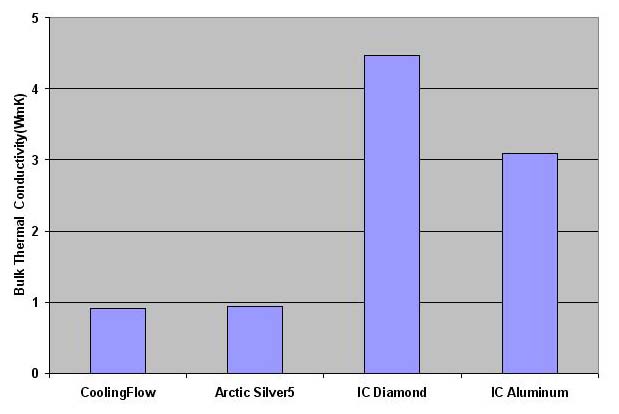 Arctic Silver 5’s performance is due in large part to its bond line thickness and less so with the conductivity of silver. As shown here, its bulk thermal conductivity is lower than that compared to grease formulations composed of diamond or aluminum particles with bulk loadings in excess of 90%.

Arctic Silver’s bulk material is composed of flat silver flakes which allows for a very thin bond line interface, which greatly enhances its performance. As Cooling Flow has a similar performance, it was assumed that it also has a bond line advantage, so no further analysis was done on it.

From the above it becomes obvious that the best of all possible worlds would be to have a thermal grease with high thermal conductivity in combination with a thin bond line. Generally the better TIM materials have bulk loadings that are above 90%, which is a crossover point which minimizes grease pump out. Considering the inherent advantage that diamond has in thermal conductivity over silver and aluminum, a diamond based thermal grease with bulk loading over 90% with a thin bond line should be a top performer.

To show an example that is a little closer to the real world, we did our own in-house testing to collect thermal resistance data using a PC test bed with a Pentium D 2.8 GHz processor and a Thermaltake heat sink, running at 100% CPU power. 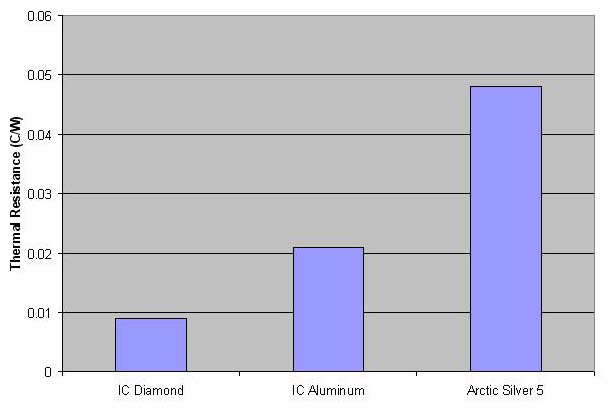 The temperature was measured on top of the chip and on the bottom of the heat sink using precision thermocouples. The temperature difference was divided by CPU power (~90 W) to obtain the thermal resistance. At least 3 samples were tested in each case. On this test bed, the diamond based grease showed extremely good performance.

These tests were run for about 2-3 hours for each grease tested. It could be argued that the testing was biased in that it was too short – some greases need more time to thin out to their best performance level compared to others. In our testing, both the diamond and aluminum configurations settled in very quickly – in about two hours.

Arctic Silver, however, does perform better over time, then appears to degrade a bit, most likely due to grease pump-out:

As shown above, it took about 48 hours to achieve best performance, but after a couple of weeks in our testing, temps started to edge back to where they were at the beginning of the test.

We then tested a number of popular greases against the diamond and aluminum formulations. CoolingFlow and Zalman Super Grease (ZM-STG1) appear similar – the same color and nearly identical performance. However, the Zalman appears to have a solvent that when left to air dry on a plate at room temp for a day or two turned to powder – it also dried out on the die during testing. Large die results: 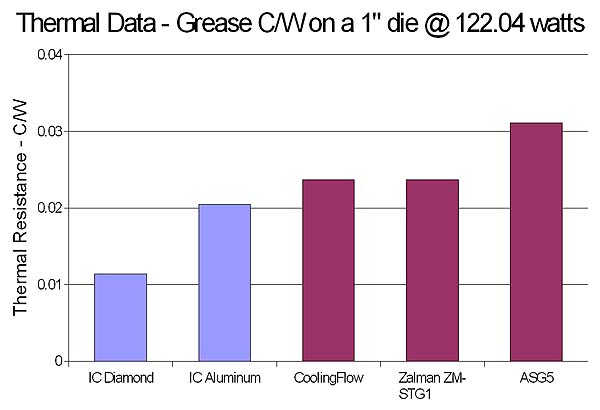 And then on a small die: 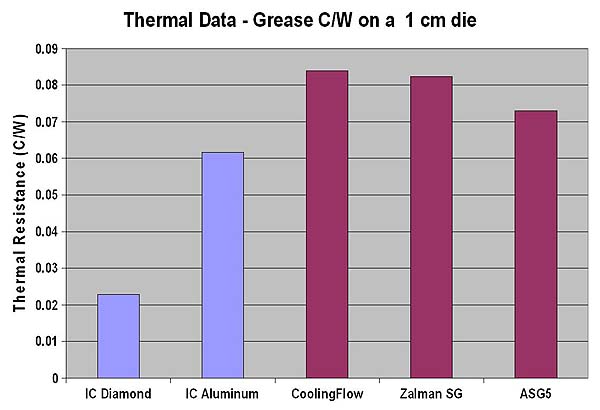 While some might argue that these are small differences of no real consequence to users, I would argue that with the increasingly better heatsink efficiencies we have seen over the years, thermal grease resistance is becoming a very large component of overall cooling performance.

With high efficiency heatsinks cooling CPUs exceeding 100 watts, high efficiency thermal greases can knock off another 2-4 degrees (30- 50%) from CPU heat. With many people paying a premium to leverage a couple of degrees for the best performance out of their systems, a couple of degrees C can be converted into several dB of noise reduction at the same temperature or a better/more stable overclock.

Diamond as a thermal grease is a promising material in situations where thermal grease represents a large portion of overall system thermal resistance. As a side note, this is also a very nice polishing compound!