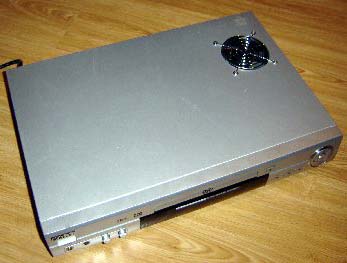 We have all thought about case cooling for our computers, but what about other electronics?

I recently overclocked my video card and learned a lot about heat and stability and how they are related. My Coby DVD player usually glitches a few times while I’m watching movies. The top of the DVD player gets quite warm. There are a few vents on the bottom and none on the top or sides to allow for heat to escape. 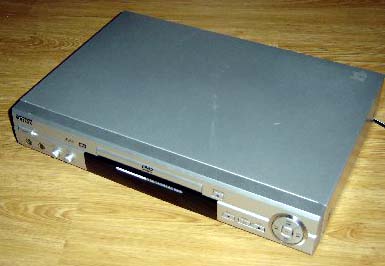 I decided this needed a blowhole, but first I needed to know how hot it got under the cover. I removed the screws from the side to take a look inside: 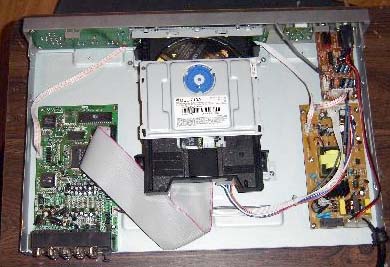 It was quite simple. Then I put a small thermometer inside, closed the case, and sat down to watch Italian Job. About an hour later as Lyle declared he wouldn’t answer to anything but “the Napster,” I decided to check the temp. I opened the top and “wow!” it was 95ºF with 68ºF room temperature. I thought that was pretty hot! I was surprised to see the drive with an IDE cable and a Molex power connector: 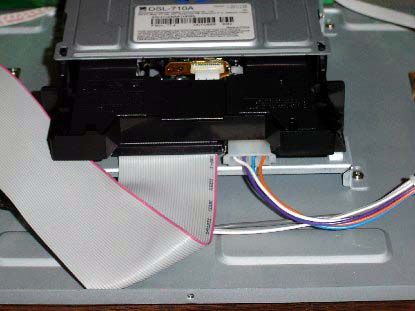 I thought to myself, “This is going to be easier than I thought”.

I checked to make sure the voltages were the same, and the power leads were labeled on the power supply part of the unit. I found a low RPM fan, plugged it into the Molex, and the other end into the drive. The drive and fan both ramped up.

Now for the cutting. I decided to position the fan over the processing circuits, which got quite hot. I took some time to line up the fan to make sure it would fit and I marked out the hole. I used my Dremel tool to make the cut and then a sanding wheel to make it good and round.

I fit a chrome grill on the cover and mounted the fan to exhaust the air out. The temperature dropped to 72ºF. It worked! The final product looks great too:

I don’t know if this was at all necessary and I can’t overclock it higher now (would like to see that), but maybe it won’t glitch anymore.

After I wrote the article criticizing some of the Northwood reviews, I got emails from quite a few people who basically said they had pretty much lost faith in the opinions of most hardware websites and just looked at their Read More

Digitimes has leaked some very interesting information about Hammer production (bolded print our emphasis): Unit sales of Advanced Micro Devices (AMD) Athlon 64 (K8) processors are expected to grow 50% sequentially in the second half of this year, according to Read More

What About Socket 939? All you need to know is that AMD doesn’t want you to buy one anytime soon. The price for the entry-level socket 939 is even more ludicrous than feared, $500. AMD apparently is going to charge Read More