Today, EVGA introduced some new peripherals into the PC enthusiast world with the X Series Gaming mice and Z Series Gaming keyboards. There are three new mice, the X15, X17, and X20, each using a triple sensor with 3-dimension array technology among several other features. The 3D array technology found on the X17/X20 uses an additional LOD sensor (a total of three) to detect lift-off distance to achieve the shortest and most accurate lift-off distance. The Z20 even offers three modes of connection: 2.4 GHz wireless, Bluetooth, or wired USB.

The Z15 and Z20 mechanical gaming keyboards offer a 4K Hz report rate which is said to be more responsive and more precise inputs. A neat value-add is the EVGA Time-of-Flight sensing system on the Z20 which detects user movement to trigger the system awake or send it asleep. The Z20’s Light Strike LK Optical Mechanical switches have 1.5 mm travel to actuation and your choice of Linear and Silent (dark grey) or clicky (light grey) type switches. The Z15 uses Kalih Speed Silver Linear or Bronze Clicky mechanical switches. Both keyboards offer loads of RGB lighting and customization through the new EVGA Unleash RGB software.

Details on all both the mice and keyboard are found below in the press release:

Triple Sensor with 3-Dimension Array Tech
EVGA brings you the world’s first triple sensor mice with dual LOD sensors, paired with a Pixart 3335 optical sensor on the X20 or Pixart 3389 on the X17. Most gaming mice use the mouse’s primary sensor or an additional LOD to detect the lift-off distance, while the EVGA X20/17 uses a more advanced 3-Dimension Array Tech. This system uses a triple sensor algorithm to detect the position where you lift the mouse off a surface and put the mouse back down, achieving the shortest and most accurate lift-off distance. EVGA’s 3-Dimension Array Tech algorithm can detect within a minimum of 0.4 mm to a maximum of 3 mm from the mouse to the surface, dynamically adjusting the best power-off height. Customize the power-off height in different directions to achieve the most accurate gaming in the world with EVGA UNLEASH RGB software.

Super Low Friction PTFE Mouse Feet
Slick movement across any surface with mouse feet made from the purest, highest grade of PTFE.

On the fly DPI + 5 Onboard profiles

EVGA Time-of-Flight Sensing System
The Z20 keyboard features a ToF proximity sensor, this detects user movement to trigger the system awake or to send it to sleep. 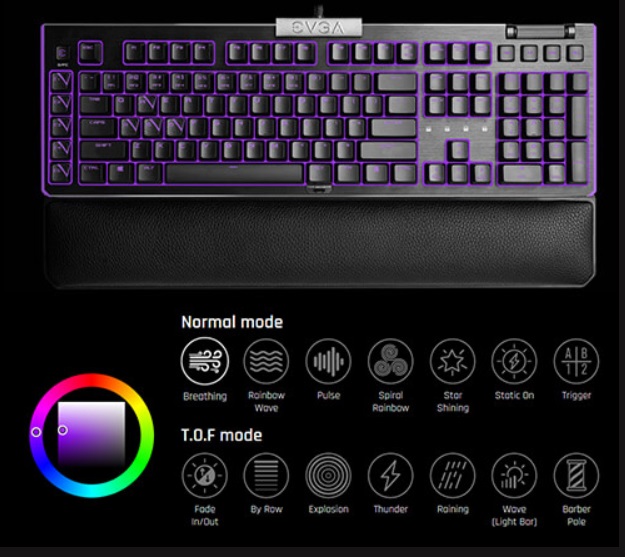 Read about all the products at the EVGA website.

Never fear folks, I’m back again after a short break from reviews. Today I bring to the benching stand EVGA’s newest flagship motherboard, the Z270 Classified K. Loaded with features and ready to overclock, this motherboard should be a real winner for our community. Sit down, get comfy, it’s time to dig in.

Next up in our tour of the new Turing GPUs, is an EVGA RTX 2080 XC Ultra Gaming. Their XC line of cards in the RTX 2080 series includes a dual fan cooler mounted to a robust heatsink and an overclock from the factory. Also in their lineup is the FTW3 Ultra. This card uses a three fan cooling solution and is the most overclocked fro EVGA. The XC Ultra Gaming this review is about is one of those dual fan solutions and the 2nd fastest in their 2080 lineup. We’ll test the EVGA RTX 2080 against the Founders Edition and the MSI RTX 2080 Gaming X Trio card we recently reviewed to see how it performs and how it places itself in the market.

EVGA has released two motherboards in preparation for Intel’s upcoming 11th Gen Core processors. The EVGA Z590 Dark is a flagship E-ATX motherboard with 22 VRM phases and has been designed with massive overclocking potential and maximum performance. The EVGA Z590 FTW WIFI features 17 VRM phases and is geared for top enthusiast-level performance. As with all Z590 chipset motherboards, support for PCIe Gen4 graphics cards and NVMe SSDs is right at your fingertips. Below is EVGA’s press release.

Thanks ...I am in bed with EVGA for the foreseeable future. Like what they have done with their fair business practices. :popcorn:

Heads up. These are 50% off for members of eVGA Elite right now.

Heads up. These are 50% off for members of eVGA Elite right now.

Thanks for the warning Joe :p:p

Blame blaylock... he couldn't do the news that day so I had to publish it later than usual. :) :chair::santa:

I ended up receiving their keyboard to try it out. The software has to be better than Razr's.


I am liking this Keyboard...

So to start with I am coming from Razer BlackWidow Chroma V2 with Yellow Switch's...An excellent feeling keyboard.
Its biggest downside is the Razer software that is used with it. It seems overly bloated. Also the passthru stopped working on my Razer, with the Logitech 700s mouse plugged in , it would lock up my PC, requiring a hard reboot. (Not Good)

The EVGA Z20 on the other hand starts working as soon as you plug it in. (Two USB and a headphone jack) It defaults to the Rainbow RGB LED light scheme no software needed. Has a similar magnetic soft detachable hand rest as the Razr. The Z20's is smaller and is not as comfortable as the Razr's which is as good as it gets. Unfortunately the magnets are in different locations, so I can not use the Razers hand rest with the Z20. :shrug: Mind you the Evga is still comfortable.

It also comes with a Key removal tool and extra WASD keys(The bag in Pic)...I hope this doesn't mean the writing is going to wear off too soon. :-/A couple years on the Razer and no issue with that. EDIT: No writing , if anything wears off it will just make the key brighter. Like cleaning a window off.

To add the Unleash RGB software...

After installing it , The Z20 asks to be updated to the latest firmware ....

Now we can play around with the RGB...Wife likes the RGB and we stick with the Default rainbow...Keyboard has passed the first and most important test...The wife likes it:)

The first thing I notice when compared to the old Razer is that it wakes the keyboard when you get close to the sensor located middle bottom front. Next ,all the writing on all the keys are lit up and very visible. On the Razer secondary choices on the number keys were not lit and you needed to find them by memory. Also this Z20 is very bright. It can be dimmed thru the software. It also turns off and goes to sleep when unused. So no bright lights if that bothers you. That is also adjustable in the software,

The keyboard has a passthrough for either your mouse or another peripheral. I chose not to use it for now. The keys seem slightly smaller than the Razers, but its no trouble using them ...Optical Mechanical they are called. The same clackity noise and feel of the Razer's. I like them, after a few minutes of typing , I like them more...

I had the WASD lit red on the Razer, this does better. The WASD on the Z20 have raised bumps so you can feel them , so IMHO they are easier to find. This is a gaming keyboard after all.:)

So after an hour I like it a lot, but I need to figure out if I can wake the PC with the TOS (Time of Flight) sensor...It wakes the Keyboard but so far does not turn on the screen, which I had hoped for. It will take me a day or two to figure out what some of the keys are for. 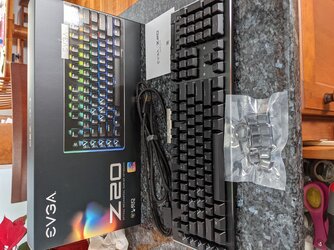 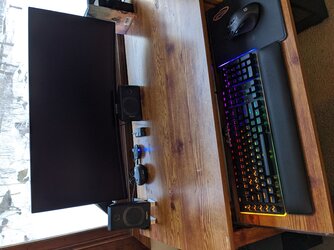 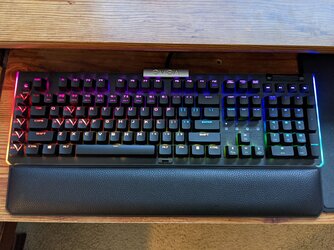 I hope this doesn't mean the writing is going to wear off too soon.

typically those keys are used in gaming and the key caps are different than the originals...not sure if evga did that here or just threw in extra.

Looks like a great keyboard. Is that a volume scroller @The top right? That could be very useful if so.

I like the extra lighting from the WASD keys. Nice touch

Looks like a great keyboard. Is that a volume scroller @the top right? That could be very useful if so.

I like the extra lighting from the WASD keys. Nice touch

Yeah it is quite handy along with the transport keys located right below it for playing and pausing Youtube or whatever media you are watching. It is only as loud as your PC volume. So you can set its limit to prevent accidentally blasting your ears. When I first saw it I thought it was a dimmer switch.

typically those keys are used in gaming and the key caps are different than the originals...not sure if evga did that here or just threw in extra.

The keys it comes with are gamers and the ones in the bag are plain. Along with the WASD there are E1 thru E5 keys.