SUMMARY: A very well made mid-tower case – well built and solid. With some mods, could be a very nice, compact overclocker’s case. 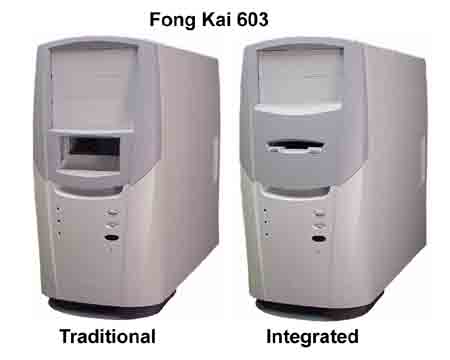 Depending on your fancy, you can change the case’s front. 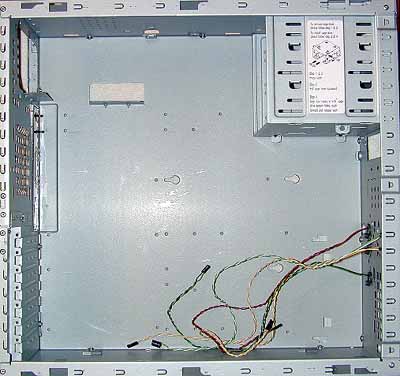 The case comes with the following internal fittings (clockwise from top left): 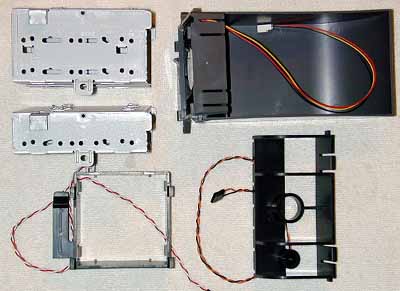 All these pieces are easily removable; I do not use card supports or a speaker so I left that one out.

The case uses plastic panels for the front, back, top and sides. Using plastic requires that one panel include a metal shield for EMI emissions – I thought it might rattle but there was no noise due to the metal insert. In addition the case ships with an alternate front (Two looks – what I call traditional and integrated) – nice to have to change the look every now and then. Changing the front is easy – simple plastic tabs etc.

The front and back underneath the plastic feature large air holes – this helps increase air flow and reduce noise (less resistance). I found this case to be relatively quiet considering I was using three 80 mm fans – the power supply, shroud and intake fan. 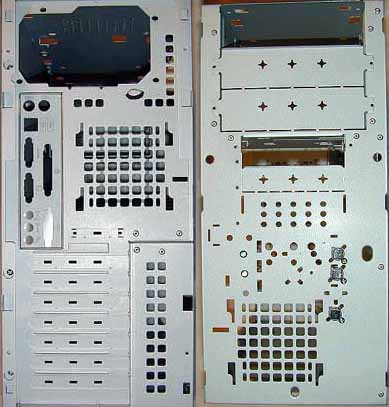 The FK 603 is damn sturdy – the metal is not tinny (I measured it at 1mm) at all and the case is heavier than the run-of-the-mill cheapo case. You can buy a case for $30 – I have and they are a pain to work with – you get cuts, many of the parts do not fit well and sometimes you have to bend some metal to accommodate parts.

Not so with the FK 603 – everything fit tightly and snugged into place very easily; you can feel the quality as you work with it. The motherboard tray is not removable which is too bad – it would have been icing on the cake.

The pic below shows the case with all the pieces in place (except the Card Support). The motherboard is an MSI 6309 and, as you can see, there is plenty of room around it. Larger motherboards like the BP6 or BX6-2 will not be cramped. 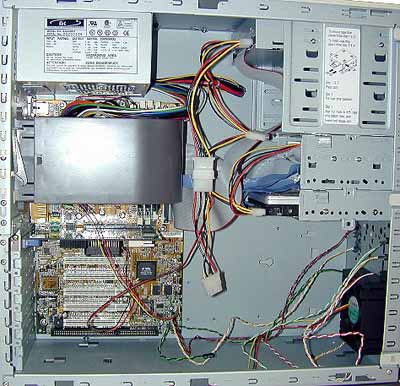 The one thing that did surprise me was how the case amplified the noise from a Vantec heatsink. The fan must be unbalanced and it set up a resonance with the metal motherboard tray that resulted in a lot of noise from this particular unit. I thought it might be a flaw in the case’s design, but after trying four other heatsinks including two using a high speed YS TECH 60mm, it’s not. The Vantec fan could be a bad one.

I was impressed with the air flow through the case – it was evident in the CPU temps: With Waterfall, case temp was equal to ambient. No doubt the CPU shroud plays a large role, but in addition the FK 603 has a couple of interesting features:

The Power Supply, made by Fong Kai, is “upside Down” compared to most others I have seen. The PCB is mounted on the top of the power supply case, so that the fan vents are oriented towards the bottom of the case (see pic below). This intuitively makes much more sense – warm air rises into the power supply’s vents and vents out. This arrangement makes more sense than the traditional power supply which has vents on the sides, not bottom.

This shot is between the CPU Shroud and Power Supply – the CPU Fan is in the back.

The second feature which I like very much is the top vent – a “mini blow-hole” (pic below). Usually we end up cutting all kinds of openings in cases to accommodate our needs and it is great to see manufacturers like Kong Fai adopting good cooling into their case designs. Unfortunately it does not look like a fan will fit underneath it, so active venting might not be possible. 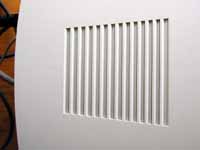 There is no doubt that, with some thought, this case can be modified to an “overclocker’s case” with some interesting features. The blow hole needs some thought but I think it could accommodate an 80mm fan. I prefer larger fans and a 120mm intake fan is a possibility although some components mounted on the front must be moved; a 92mm could easily fit with minor mods.

The CPU shroud works extremely well – either with or without the shroud. The air flow through the case and its low-noise design are solid elements upon which to build a case more suitable to your needs. It’s not cheap, but then a case is something you live with a long time – cheap is OK for the average user, but are you average?

Stay tuned – the Dremel is calling me.

Thanks again to Fong Kai for sending us this case – a pleasure to review.

A Talk With An Intelvert

Every once in a while, we talk about AMD fanatics (whom we call AMDroids). There is an Intel equivalent to an AMDroid. We call such people Intelverts. We don’t talk much about Intelverts because they hardly write to us at

SUMMARY: Mini laptops are all the rage – but what about keyboard ergonomics? As a frequent traveler, I like to have a laptop with me. What I DON’T want is a 7 pound albatross – I have carried on bags

As with any new product there are going to be flaws, and the RatPad really does not possess any real problems. One of the first things that I noticed was right after I whipped it out (the RatPad), and placed