Also, I know there was a pretty recent post about overclocking an FX-8370, but as you all know, chips/mobos can vary greatly, so I'd really appreciate some help with my setup. I'm currently sitting fairly stable on a 4.6 oc but I'd really like to hit 4.7 (I don't know why I want that specifically, but it was the goal I originally set out for). The main problem is my temperatures. I had to bump my voltages a bunch to even be semi-stable at 4.7 and when I started bumping it and my NB cpu voltage a bit the temps started to hit about 70 on my socket. My core temp is fine due to my H115i pro, but even with a 140mm fan pointed at my VRMs and 120 slim fan behind my mobo hitting the socket, I'm hitting 70c some time between 1 and 2 hours of Prime95. I haven't even tried IBT on it yet at this point, as I'm sure that would see my temps beyond that even.

I'm wondering if it has something to do with my fan setup. I'm currently on a positive airflow situation with 4 fans as intake (2x120mm bottom, 2x140mm front) and a single 140mm exhaust on the back and the 2 fans on my H115i pushing air out the top. Then I've got the 140mm spot fan on my vrms, but there's no vents in my side panel so it's just kind of moving air around. Same thing with the slim 120mm I have behind my mobo socket, there's no vent on that side panel either. Should I be drilling some holes or is just having the air moving around more good enough? For now I've backed it off to 4.6 so my voltages might be kind of high for that but it's stable at least. If I can't get it up to 4.7 stable and with good temps, I'll try backing off the voltage a bump or two and stay at 4.6

I know pictures help so here's a few. These are under load while running Prime95: 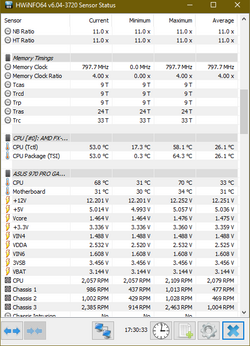 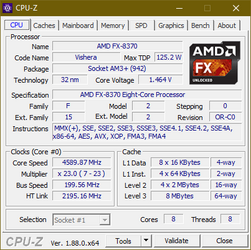 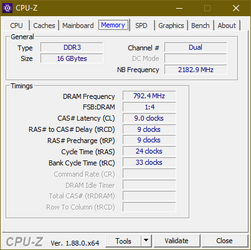 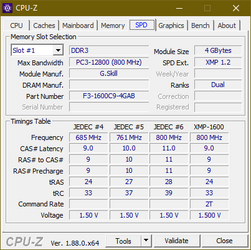 And here's a couple of the spot fans I was talking about (yay zip ties):

I know my case needs a bit of tidying in the form of some zip ties or something on some of those cables, but the way my case and psu is setup it's kind of tough. I'm going to be getting a new psu that's modular in the near future so that will help. And also as a side note, I didn't notice just how dusty my case was until taking the pictures so I've since cleaned it as well!

I'm saving up some money to do a big cpu/mobo/ram upgrade in the near future, but I'd like to get my OC and my temps stable to last me until then.

Thanks so much for any help, it is much appreciated!

Well cool temps is all FX needs to increase an overclock. So it looks like you maxed out at 70c. You need to address the cooling issues.

First thing I'd do just by looking at the pictures, is drag the PC out to the garage and blow it out real good and then re-seat the Waterblock with some new thermal paste. Run a Burn in (If paste requires it) and let the paste set up for at least 24 hours before getting serious with an overclock.

A quick and dirty way to see if you have airflow problems is to run your stress test with the side panel off, grab a house fan and direct it into your case and you will know right away if that is the problem. Like ShrimpBrine said give your cade a good cleaning, tidy up some wiring and lets see what you have then.

Dont forget the guide in my signature.

I've also never really waited to overclock because of paste. At worst a hot cold cycle gets it where it needs to be...but really isnt necessary. A few pastes take time for best results, but they are few AMD far between and only improve 1-2C. Peoples temps vary dramatically so it's tough to call out what temps should be for a user. Each chip is different... ambient... etc.

^^^ Yes but it's also pretty much known fact that FX loses stability around 60c. Since he is already above that, address the cooling before anything else.
OP

Ok first of thanks for the replies!

I tried bassnut's idea of removing the side panel and blowing a house fan into the case. I just ran Prime95 for about 30 minutes or so but I already saw 7-9 degrees cooler just doing that, so I think I need to address some airflow problems somehow but I'm not sure quite how with the way my case is structured. My video card kind of blocks the airflow from the lower portion of my case a bit. I was hoping the 2 spot fans I use would help with that but they only seemed to lower 2-3 degrees. Maybe I need to drill a couple of holes in my side panels to let me spot fans do a better job?

Some time this week I might try reseating my H115i on my chip but I don't know how much that'll help because the cooler is only a few weeks old and it came pre-applied with thermal paste. Maybe I messed it up or got a hair or something on it? I dunno, but based on my limited knowledge of overclocking and research I've done, I really should be able to hit at least 4.7 comfortably so something's wrong. I'm hoping I can mess with my cables or something and get better airflow in the case and hopefully that helps.

Here's my temps with the side panel off and a house fan blowing into my case. This is also backed off to 4.6 but keeping the voltages the same: 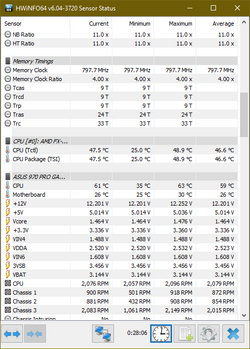 Thanks for the help so far!

Mr.Scott said:
^^^ Yes but it's also pretty much known fact that FX loses stability around 60c. Since he is already above that, address the cooling before anything else.
Click to expand...

You've got fans doing all sorts of things. I'd ditch those bottom intakes and just leave the front. That hdd cage is what is killing front to back flow.

Frohteloss said:
but based on my limited knowledge of overclocking and research I've done, I really should be able to hit at least 4.7 comfortably so something's wrong. I'm hoping I can mess with my cables or something and get better airflow in the case and hopefully that helps.
Click to expand...

You should be able to hit 4.5 comfortably. Anything over that will take work. 4.8 is a good goal on the newer chips.
IMO, you are already higher on the vcore than I'd like to see for your clock speed.
Need to get the temp down. That's the bottom line.

And that'll get him that 15-20c drop I was talking about. However, with my mistake I had much more radiator than this so usually never would see 60c at 4.6ghz.

@op, a box fan with the panel off is not going to be a perm-a-fix.

Clean the PC, re-seat the water block. Looks like a few year old build and needs some love.

It's all about the cooling the cooler you can keep it the less voltage needed. The Silicone lottery does play a bit of a roll but for the most part the chips a very similar. My old FX8370 took 1.46v for a 5.1 OC but I had 240 + 360 Black Ice GTX rad's in a custom loop.
OP

Ok I'm going to try some extra cable management first for better airflow. I've removed 2/3 of my hd cage as I recently lowered the number of hds I had hooked up so that may help a bit. I think my biggest problem is my atx power cord goin to my mobo blocks a huge amount of airflow going from front/bottom to the middle/top of my case. I'm going to try threading that through to the backside of my mobo and see how much that helps first.

Then I'll try backing off the voltage in steps and see if the lowered temps helps keep my oc stable. Because it's true that my current OC of 4.6 is stable but i'm not in love with my voltages/temps either and If I can get higher OC on less voltages due to just the temps themselves, that would be awesome. And it really does seem that most of my freezes that came when stepping up the OC came when the socket hit 68+ and i just stepped up the voltage thinking that that was the problem. Should I even bother with CPU-NB voltage at this point or just leave that at it's default VID?

After that I'll try reseating my H115i on my cpu and see if that helps any. The reason why I'm going to try that last is that my core temps seems to be fine, I sometimes hit low 50s but it mostly stays in the upper 40s. Its mostly my socket temp that skyrockets.

I'll update you all once I've had a chance to try these steps out. It might have to wait til this weekend as I've got a fairly busy schedule this week. Once again thanks for the help so far.

The atx cord by itself isnt the issue. Clean em all up though.

Try focusing on getting the NB to it's sweet spot. This will be anywhere from 2.4-2.6 Ghz for most later model FX chips.

Going to jump on the cable management bandwagon. Some thoughts: All extra PSU cables go behind the motherboard try. Might be tricky to make them fit but with enough zip ties you will. Excess length can be secured in the 5.25" bays for cables that are in use. Get everything tight and tidy. At this point start by unplugging everything and then running it one at at time, carefully. Front panel headers, fan headers, SATA, then PSU.

The fan hanging out in front of the CPU should be OK, it has enough clearance, and would actually probably require a shroud to make a side hole particularly useful. The one behind the try needs air supply to do any good, but I think that is the least of your worries right now.

Try to think about air flow instead of pressure. I've had plenty of "positive pressure" setups become nightmares of dust. EarthDog mentioned before removing the bottom fans, I would also consider reversing your rear exhaust to intake cool air directly to the motherboard.
You must log in or register to reply here.