I originally had the h60 but wasnt liking my idle temps of 36-42c so added the h115i mounted it on top with the ml140 fans pulling air thru the radiator out the case
Making both front and back as intake.

So bot sure what my temps are I k ow I'm OCD with stuff but which program telling me the truth I also checks with hwmonitor showing me 30-34c idle so it's cold in nyc these pc temps should be around 27-29c if I'm not running anything heavy or am Is it my OCD and my temps are fine??

1. Uninstall AISuite unless you need it.
2. Use Realtemp or Coretemp for CPU temps.
3. Idle temps aren't really relevant in the first place. What you listed sounds about right, really. The sensors are also less accurate at idle (but get more accurate towards TJMax). How are your load temps? If they are ok, no need to worry about the idle temps.
OP
J

1. Uninstall AISuite unless you need it.
2. Use Realtemp or Coretemp for CPU temps.
3. Idle temps aren't really relevant in the first place. What you listed sounds about right, really. The sensors are also less accurate at idle (but get more accurate towards TJMax). How are your load temps? If they are ok, no need to worry about the idle temps.
Click to expand...

Well in intel extreme utility during benchmark it went up to 56 for a second then back down to around 36c I think my OCD is getting the better of me.. in icue it showing me at the moment 30.8c.

What about during the stress test... not a 2 minute benchmark?
OP
J

Is the CPU overclocked? If so you need to use a stress testing product besides XTU to confirm stability. XTU is kind of wimpy. If the system is not overclocked then XTU will do fine for giving you approximate max temps you would see running real world apps but you would need run XTU for about 30 minutes to allow temps to reach an equilibrium. They may rise slowly up to that point.
OP
J

trents said:
Is the CPU overclocked? If so you need to use a stress testing product besides XTU to confirm stability. XTU is kind of wimpy. If the system is not overclocked then XTU will do fine for giving you approximate max temps you would see running real world apps but you would need run XTU for about 30 minutes to allow temps to reach an equilibrium. They may rise slowly up to that point.
Click to expand...

My system is overclocked now at 4.9ghz I used intel performance maximizer so I assume it's ok being overclocked at these temps

Use the Realbench stress test for a couple of hours or AIDA64 Extreme for 5 hours to confirm stability of the overclock and check load temps.
OP
J

yeah not many people are fond of those automatic OC programs. Is there a reason you disabled the performance maximizer OC before stress testing? It will be beneficial to get in the habit of changing one thing at a time, then test, then go on. I know its difficult starting out because you are exposed to so many ideas / suggestions etc, but if you need to write down things you want to try / test. Also write down the outcome.

My advice is to familiarize yourself with the basic settings and learn how to manually overclock. This is a good place to start https://www.overclockers.com/3-step-guide-overclock-core-i3-i5-i7/. It is old but will cover a lot of the basic terminology and the functionality of the different settings that we adjust in order to achieve an overclock. Some of it is irrelevant today, but it's still good background knowledge. Every system is different so really you'll need to take some trial and error to see what's best for your system. I wouldn't use any references to specific numbers in the guide linked above, but just read it to understand the methodology and terminology (hint your main settings are going to be XMP, multiplier, and v-core so pay extra attention to those parts). Once you have a baseline understanding you can say reset default bios settings, enable XMP, do a quick stress test, then set your vcore to 1.25v and increase the multiplier until it fails a stress test. After that you can consider increasing voltage if your temperature is still good.

Overclock manually in the bios, not much of a hassle with those CPU's.

If I am not mistaking, max temp is around 100C for 8th gen Intel. I personaly keep them in the low 90's (max last generation CPU's: Intel ix and AMD Zens).

Not fond of Aida myself. Rather use OCCT or P95.

Edit : RealBench is really good. But think of keeping your [email protected], as it can induce errors in RB (as it is stressed as well).

I like RealBench because it stress tests in a way that is well, more "real." More like actual computing tasks that are on the more intense side.
OP
J

Okay that's really good to know, however we need you to quantify "horrible temps." Specifically what temperature under what load. Please post screenshots of your temp monitoring program if able. As long as you are under 90C while stress testing, this is considered to be acceptable.

You're in a small case which is not going to cool as well as a full size tower, however it shouldn't be terrible. One thing I see is that the top mount for your CPU cooler appears to have pretty minimal ventilation, so the fans are struggling to move air through the rad. Also are you using a discrete GPU? I didn't see it listed in your first post.

To clarify though, I would not suggest touching hardware until you get a specific load temp while running one of the stress test programs mentioned above and posting a "load temp." The temps you have mentioned above are well within the operating spec of this CPU, but they are also meaningless as they are not obtained using a standardized load, so we have no way to compare them against our expectations for the CPU.

One thing you could try is moving the CPU cooler to the front of the case, where it appears to be less restrictive. You could then move the case fans at the front to the top and back, and use them to exhaust. Also please ensure that any protective plastic film is removed from the cold plate (the part that touches the CPU) of the cooler and that thermal paste is applied appropriately (pics are great here, if you want to remove the cooler and take a picture of the cooler and top of CPU, then re-apply the thermal paste).

Jack, any particular reason you are always posting with your smart phone?

As has been said, what we really need you to do is to run some stress tests to check for what max temps are at under heavy load conditions. Sharing idle temps from bios or AI Suite in Windows is not helpful. Idle temps are only helpful in troubleshooting if they are abnormally high, which yours are not.

Both AIDA64 Extreme, OCCT and Realbench have built in CPU temp readouts and OCCT gives a lot of voltage info as well. Run either one for at least 15 minutes unless CPU temps rise to 100c. If the temp gets that high, then stop the stress test. After the stress test, report to us what the max CPU temp was. We want to know numbers, not a description like "still getting horrible temps." We have no idea at this point what the means to you.

The best help for us to help you would be to for you to do an image capture of the stress test app window and attach it to your next post. To capture the image use the built in to Windows "Snip&Sketch" tool to frame the image, the save it to disk. To attach the image to a post, click on the "Go Advanced" button in the lower right corner of any new post window.

So, you're [email protected], under heavy load (stress test), you reach 62c, right?

"horrible temps" are in the 95c+ realm (not even that "horrible", Intel CPU's from that gen can sustain 105C IIRC).
OP
J

I am running a 2hr stress test with xtu I tried prime95 and im clueless how it works i mentioned earlier its 4.7 now sure if its overclocked or that's with turbo boost but in xtu the multiplier is showing 4.9hz while cache 4.6 i have the power max at unlimited i believe I will take screen shots and upload them here for you guys but so far 45 mins in its showing at 100% cpu load between 62-70c so I'm assuming that's good regardless to what idle temps are. I reapplied thermo paste and switched fan setup to front intake and back exchaust with radiator exchaust on top since only the top can fit a 280mm radiator unless I remove my hdd then I would be able to front mount the radiator which I wont since I need the hdds and dont like bringing hot air into the case 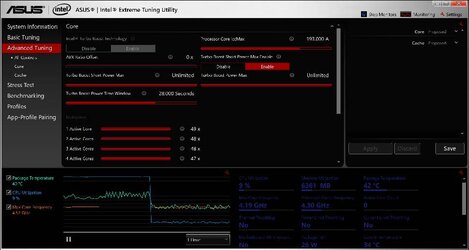 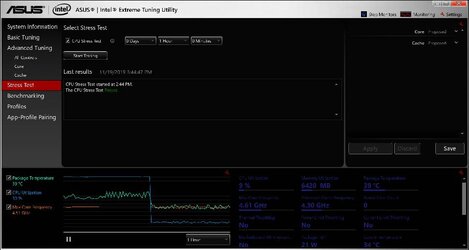 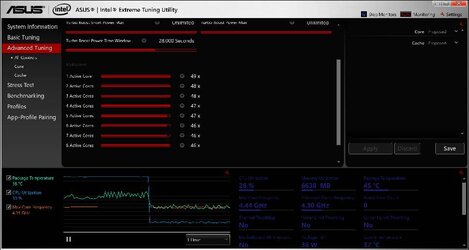 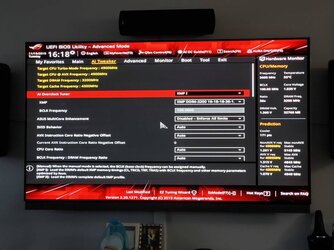 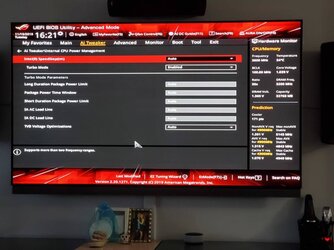 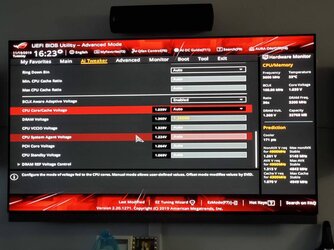 We still don't know from those pictures what your max temps during the stress test were. Your max CPU usage is only 27% in what you show in the pics. XTU does not keep a record of peak temps but only reports temps real time. Besides, it's a very whimpy stress test to begin with.

There is nothing to know about Prime95 and how it works. You download it, install it and launch it. When it launches choose the stress test option and "blend" options in the popup windows, which I think are already chosen by default. It will then start to put your computer through a demanding set of computations which will put it under heavy load. But then you should also have CoreTemp or RealTemp open on the screen in order to monitor the temps and voltages.

I get the definite impression this is all very new to you.

Edit: By the way, unlike XTU the other stress tests we have recommended do not provide tools to overclock your CPU and memory so if that is what you mean by saying "I don't know how it works" with regard to Prime95 you need to know Prime95 is simply a stress tester.

Furthermore, until we can establish that your cooling is doing it's job, you should not attempt to overclock.
Last edited: Nov 19, 2019
You must log in or register to reply here.