Noctua recently released the NH-P1 passive CPU cooler and NF-A12x25 LS-PWM low-speed 120mm fan. The much anticipated passive cooler is designed to cool modern high-end processors using only natural heat convection or typical case airflow using its six heat pipes and loads of engineering. The NF-A12x25 LS-PWM fan is designed to assist the cooler in a semi-passive configuration. The PWM function allows the fan to stop during lower loads or rotate up to 1200 RPM under high loads. At full speed, it produces only 12.1 dB. The NH-P1 cooler is listed for $109.90 while the A12x25 LS-PWM fan is $29.90 and is currently available through Amazon. Here is the press release for Noctua.
Click to expand...

One is already standing next to me. Maybe I will start tests this weekend (depends on the time). Somehow I'm more interested in this cooler than almost everything else that was released this year
I only think that the fan could be black or gray like something from the redux series. It would fit better than the brownish one. It doesn't change fact that these fans are great.

I agree. When I saw them that was my initial thought too. It wouldn't surprise me to see them come in black at a later date.

Did you get the fan too Woomack?
W

Yes, arrived with the fan. It's still unpacked as I had no time to take photos (except that one in the new stuff thread). I just never start tests before I take photos because it's hard to get rid of fingerprints or dust from some items and I don't really want to use gloves for that It's like you think it's clean but on the photos are little white dots. I bet you know what I mean as it's especially visible on black PC cases. I never edit photos in another way than resizing or adjusting brightness.

Unpacked the monster
It's probably the first Noctua cooler that has NT-H2 thermal paste. It generally spreads better and performs better than the NT-H1.

Some photos. With a fan, it looks weird. 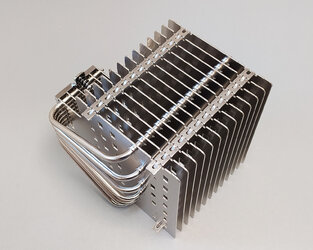 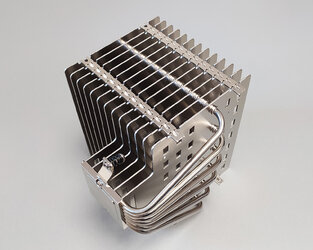 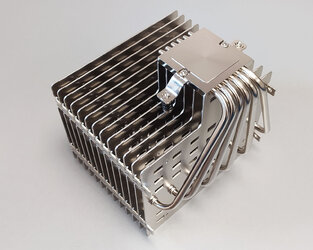 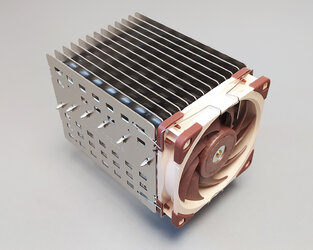 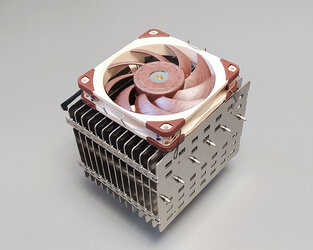 I know exactly what you mean about the fingerprints. I do the same.

Those fins are so thick! I like that the fan can be mounted on top or on the side. That's forward-thinking right there. Looks like they even included holes for push/pull.

So its a passive cooler that comes with a fan. Doesn't that make it an active cooler by default?

Interested in seeing the result of this with the big heat loads of today's CPUs.

I believe the fan is sold separately. When adding the fan it becomes a hybrid as the fan spins down to 0 RPM.
W

Yes, the fan is sold as a separate product. You can use it or not ... or use some other type of cooler. The dedicated fan is a "quiet" version that is designed to stop while other series run at 300+ RPM so, in the end, it's a semi-passive option.
I assume that the optimal fan placement matters depends on the airflow in the case. On the Noctua website, are docs that are suggesting PC cases and other components. In short, there are not many cases that will work well with this cooler in the passive mode.
There is also a limit of ~120W but don't count it in TDP as for example Ryzen 5000 heats up more than Intel at the same expected TDP. This is why on the recommended CPU list, Ryzen 5900X is marked as not possible to work in a passive mode while 11900K is accepted but the clock will be around its base frequency. I assume that not much better will be with the 5800X as in my older tests, it wasn't much colder than the 5900X.
I guess I will test it with the 11700K and we will see how it works.

I'm only not sure if the advantage of having a passive CPU cooler, in reality, changes much. I mean graphics cards make more noise recently, the same for a fully passive PC you will need a fanless PSU, no HDDs that are louder than most CPU fans, etc. In any stronger PC, I can't hear the NH-D15 with 2 fans. So the NH-P1 seems like a good option for a lower power PC with IGP but who would buy it for a cheaper CPU with IGP and install it in a quite big PC case? Just some thoughts but they don't change the fact that I want to test it in some scenarios Building a passive PC that can run 24/7 without any moving parts would be nice too.

I think that to keep it quite small, can use one of the cube ITX/mATX cases with mesh all around and support for CPU coolers up to 180-190mm. Maybe Jonsbo V8 or something from Thermaltake. Just an idea but not many are on the tested cases list.
You must log in or register to reply here.