I am thinking of buying these two items as my first watercooling pieces. Does anyone here have any opinions on either of these or their implecation together.

Looks like a easy, worry-free, and relitivly cheap way to start to me.

of corse I will also need to buy a few fans, maybe some screws, hose, and fluid. All together im thinking around 400$us for a decent watercooled TEC setup.

still beyond anything ive tried so im doing that guessing thing...

Nothing about tecs is easy or worth it for that mater... Was thinking about doing it myself at some point done alot of research, in the end decided against , keep in mind that you can pick up a SS unit for about 400-500 $ used .

yea, im not really as worried at all about condensation as I am leakage. I guess the peltier on that really isn't what I was thinking it would be.
I get lost trying to put together in my mind all the pieces I would use and overanalising them LOL.

The combo res does look nice though and I think I did see somthing on it here. I am just trying to look at my options and think if it would be worth the downtime and so forth to get into somthing other than air cooling.

all you have now is air cooling.... rest of us water geeks in this forum are already doing the best solution v trade off`s

so why not just good water and leave the mad scientist bit to people after insane bench figures?

point being theres room for improvement here without the ball ache of extreme cooling.
OP

yup air, thats it. As a sidenote I'm using Permatex antisieze as TIM too! If anything a small loop for my chipset and GPU would be nice.

Have fun. I see issues and I advise against it. Have you watercooled yet? If no, then do it first. TECs themselves are evil beasts and you need to really undersatnd them. Once you got a handle on watercooling, then add the TECs.

It ain't roket science, but a simple mistake can ruin a chip, mobo, GPU card etc. You got the budget and time, be my guest.

yea, im not really as worried at all about condensation as I am leakage.
Click to expand...

That's interesting, because both condensation and leakage have the unfortunate effect of water dripping on your motherboard.

another senior blinding us with science

That's a hilarious smiley, PM imog and get it added!


But yeah, condensation and leakage will both fry things.

BobbyBubblehead said:
another senior blinding us with science 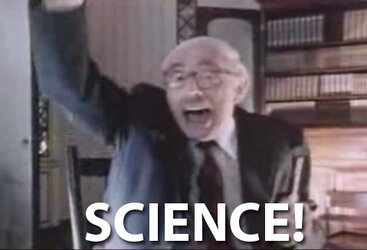 Location
With Yahweh in Colorado

why not just good water and leave the mad scientist bit to people after insane bench figures?
Click to expand...

Hey might be from the UK but for once hes right (dam British) water cooling is fun and
complex. I'm SLOWLY building my TEC system.

water no good. I know from my extreme water chiller.

tec used to be worth trying many years ago when CPU weren't as hot and you could actually find one that could handle it. Today's cpu gets rather toasty so you'd need a bigger and more powerful tec and some cpu is not going to see any tec that can work because the thermal dissipation is not good enough, and there isn't a tec that can handle i7 and the upcoming i9

You also need to insulate the board around cpu socket to prevent condensation as stray water can short out. with modern mobo having cpu contact just a few hair apart, you only need a speck of water to screw the whole set. Lastly, it is quite hard to apply dielectric grease into cpu socket full of tiny pins.
OP

Condensation really is not much of a concern at all, that can be taken care of pretty easily with things i have sitting around in my already arrid house. Was thinking of oil immersion as my project, but deemed that unnessaray.

I guess, would probobly be more rewarding to build myself a SS.

Location
Stealing your megahurtz at night

Let's not forget how power hungry and inefficient these pelts are as well. As the quoted post shows that one pulls 24A at 15.2V, which is roughly 365 watts. Taking into consideration the amount of heat that they put out on the hot side, you would need a pretty serious loop just to dissipate that. On top of that, if you wanted to put your GPU('s) under water, you would need a separate loop, due to the heat from the pelt. So altogether, you would have the cost of 2 loops, an extra PSU (just to drive the pelt), and even further, pelts have a fairly high failure rate, unless I am misinformed. So if you have a D5 vario on setting 5, you could be looking at up to 30 watts power draw, plus another 15 for fans (if you only run 3), on top of the 365 for the pelt. That is a total of 410 watts, plus the possibility of the pelt failing, or 45 watts for cooling both your CPU and GPU, with much less worries. Keep in mind that 410 watts is only for cooling one part of your rig, so a second loop, you could be adding another 45. Plus there is also the hassle of insulating your mobo, which will void the warranty, so if something on it dies, even if it's not related to the cooling, you are stick paying for a new board out of pocket. Hope this helps.

Pelts have outgrown their usefulness as processors have evolved with higher thermal designs than there were in the past (eg: old school processors)

With anything now on the market for processors, you're better off air cooling than using a TEC + H2O... but you're talking about a TEC loop, just go with straight water cooling. It's a hell of a lot easier and you're gonna get respectable temps for a much more respectable price
OP

I do need at least a small loop for my setup though. maybe not TEC but as you will see in my ataced pic of my main rig there are some cooling restraints.
Thinking maybe a huge rad mounted to the back of my desk. 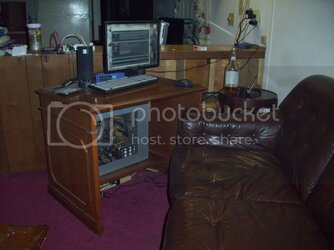 You'd be just fine hanging that rad off the back of the case. Get the HR-03 heatsink from thermalright for the GPU. Unless the Swiftech GPU block, the MCW-60 will fit. That rad is more than your rig will need if you watercool both parts.

The CPU inside that enclosure isn't helping temps much.
OP

Conumdrum said:
You'd be just fine hanging that rad off the back of the case. Get the HR-03 heatsink from thermalright for the GPU. Unless the Swiftech GPU block, the MCW-60 will fit. That rad is more than your rig will need if you watercool both parts.

The CPU inside that enclosure isn't helping temps much.
Click to expand...

You are right! the 45nm cpu i use dosn't make a lotta heat compaired to the 90nm p4-830 I had before though but video cards always run hot and do the most work in my case.

my 9800gt will be replaced soon but I still think at least a loop for a GPU will be needed here. IMHO 500x7x4 isn't totally needed other than braging rights but I plan on using this desk setup for a long time. My mother acually made the desk and end table you see in the picture, but drilling a few holes and such to make a nice 24-7 pc setup would be alright. i'M not looking for as much of an OC gain as I am to have an aesteticly pleasing rig.
You must log in or register to reply here.

C
Removed my AIO went with a full custom loop.. Little help for ideas on routing
2

F
A rookie's trip through watercooling: Getting to glass.