Our good friends at Newegg were kind enough
to let us have a look at a pair of graphics cards, and today we’ll look at the nVidia card they sent, the
Gainward FX5700 Ultra “Golden Sample”.

The topics I’ll cover in this article will discuss packaging, accessories included, technical specs, and some performance numbers. I’m not going too deep into the last one, as
I’ve got planned an in-depth article following this one to cover performance.

I spent several days benchmarking this card, a Radeon 9600 Pro, and my old GF4 Ti4200, on two systems (AMD and Intel), using eight different benchmarks ranging from older DX7
(Microsoft Direct X 7) to DX9 level programs, as well as a pair of overall system benchmarks, to see how much those numbers are effected by the graphics card used. The same hard drive
(Western Digital WD400BB) and memory (1GB (2 x 512MB) Corsair XMS PC3200C2) were used in all the runs, and the drive was formatted and a fresh install of Windows XP Pro was done between each
card. I’ll hit a couple highlights from all of that here, but get in depth in the upcoming three way comparo.

Lets start off by taking a look at what you’ll get if you buy one of these cards first.

Pretty standard fare. I haven’t quite figured out what “she” has to do with graphics cards, but I can tell you she wasn’t included in the retail box. =)

Lets look and see what is included next.

Opening the box finds the card on top, safely enclosed in a static bag, with some foam cushioning underneath. Under that, lies the rest of the goodies. 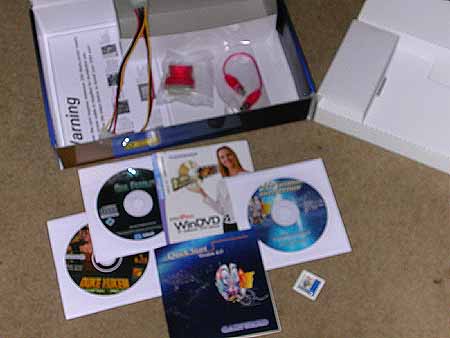 Included in the retail package is: 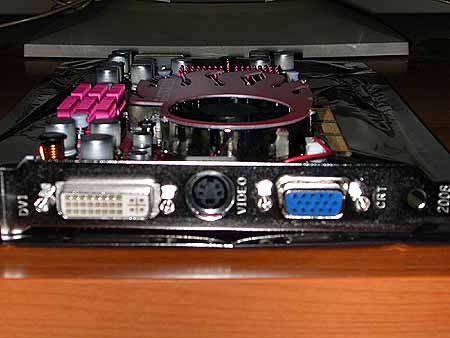 The connectors provided (L to R); DVI, S-video out, and VGA

Ok…it’s time to fire this monster up and see how she flies.

While I tested this in two systems, I’ve included the picture above (and the ones below) for one important reason. The NF7-S motherboard has a clearance issue with physically large graphic cards.
If the card is too much longer than the AGP slot itself, it runs directly under the ends of the memory slots. If it does, changing memory sticks for any reason also requires
removing the AGP card.

This card obviously has this problem.

A very tight fit, all the way around

*mental note to self….blow out the dust before taking the pictures* =)

One thing I noticed, as I worked with this card in this machine, is that being as long as it is (nearly reaching the hard drive…I had to relocate it higher),
is that it formed almost a “wall”, blocking some of the airflow through the case. My temperatures ran higher by two or three degrees when I had this card installed in the AMD system.
The Intel machine is built in a different case, and this wasn’t a problem with that rig. Nor, was the clearance issue with ram slots on the Abit IC7 board used in that machine,
as seen below:

Plenty of room to get the ram in and out, if needed here.
Benchmarking the card

In the process of benchmarking this card (and the Radeon 9600 Pro, as well), I was somewhat surprised at the results. Comparatively, in DX7 and DX8 testing, both of them scored lower than I
thought they might, and in some cases, even lower than my 4x AGP/DX8 only GF4 Ti4200. I really thought these cards would outperform my old Ti4200 on all levels.

I spent a good deal of time trying to figure out why the scores were what they were, checking and rechecking every BIOS and Windows setting. Nothing helped. Enabling and/or
disabling various settings (sideband addressing, for example), didn’t help (or hinder) the scores I was getting. When I ran newer DX9 specific benchmarking, both cards did perform very
well however, and handily outperformed the Ti4200.

Again, I’m not going to delve too deeply into this here, as I’ve got a substantial amount of data, and I plan on putting it into a separate article comparing the three cards I tested.

The two systems I tested this card in are as follows:

All benchmarking was done at 1024 x 768, 75 Hz. The default settings were used with each individual program. For example, 3D Mark runs at a 16 bit depth, with triple buffering,
16 bit Z-Buffering, and Texture formatting. 3D Mark 2001SE uses 32 bit depth and 24 bit Z-Buffering for default settings. Whatever came up when the programs were first run, is how they were run.

I ran each of them a minimum of three times thru, and kept the best (highest) score. The ShaderMark v2.0 benchmark doesn’t give a “total” score like the rest I used, but rather a
complete breakdown of each individual test within the benchmark itself. A screenshot of this in Notepad from each system is included below. The 5700 Ultra didn’t have support for several
of the tests in ShaderMark 2, looking closely at the screenshots will show numbered lines missing. Those tests were skipped due to non support.

ShaderMark v2.0, AMD system (above), and Intel (below)

In reviewing the scores above, they are very similar to the scores I received when I tested out the ATi 9600 Pro in some respects. Despite the higher total CPU speed (2400MHz vs 2200MHz),
the scores from the Intel system were slightly lower than the AMD machine, again with with one big exception. The Memory score from PC Mark 2002. In this benchmark, the Intel system scored
significantly higher the AMD rig during each card’s testing.

As far as really comparing this card to the 9600 Pro or Ti4200, I’m going to cover that area comprehensively in another
article very soon.

Aside from the clearance issue on the Abit NF7-S, this card performed quite well in both systems it was tested in. I’m still surprised by the seemingly low scores in the older benchmarks, where
I thought both this card, and the 9600 Pro, would produce staggering numbers. Neither did. They both did excel when running DX9 specific benchmarks, however.

With the results I got above, unless you’re upgrading from a GF2/3 level card or older ATi model, I’d find it hard to move towards one of these. I tried everything I could think of, and then
some, but nothing I did seemed to bring the DX7 and 8 benchmark scores higher. The same held true with the 9600 Pro.

If there’s a DX9 game out there you really want, this card will run it well. This is where they both shined.

It was great to be able to test these cards (this one, and the 9600 Pro) out, and start bringing us “up to speed” in an area in which we’d gotten away from for a while.

I’d like to thank Newegg for letting us test this out.

If you are like me, you can’t keep up with the younger guys in games like Quake, Half-Life, Unreal or any of the many other high speed action games out there. Frame rates aren’t as important. We just want awesome