“Maybe I’m just special,” is what I kept reciting to myself, to try and keep calm; as the realization hit me that the brand new Rampage II Extreme would be running one GTX 285 short of a full load. I knew that this wasn’t going to end well.

When the big red box showed up, I was excited. As my trusted eVGA e758, had just left for RMA. The Asus came HIGHLY recommended, from air and water benchers. Seeing how I run water, the eVGA RMA was the perfect opportunity for me to wet-my-whistle on the ASUS Flagship. The packaging is fabulous, typical for ASUS, all the nice little boxes perfectly nesting inside the outer box. All the accessories that you could ever want, but who uses those?

Now, for starters, I fall somewhere in between your average PC enthusiast and your extreme cooling bencher. Components are in and out of my rig quite often, but I still use a full tower case, a reverse ATX to be exact, so my video cards are easily accessible and right on top. No benching station for me, not yet at least. 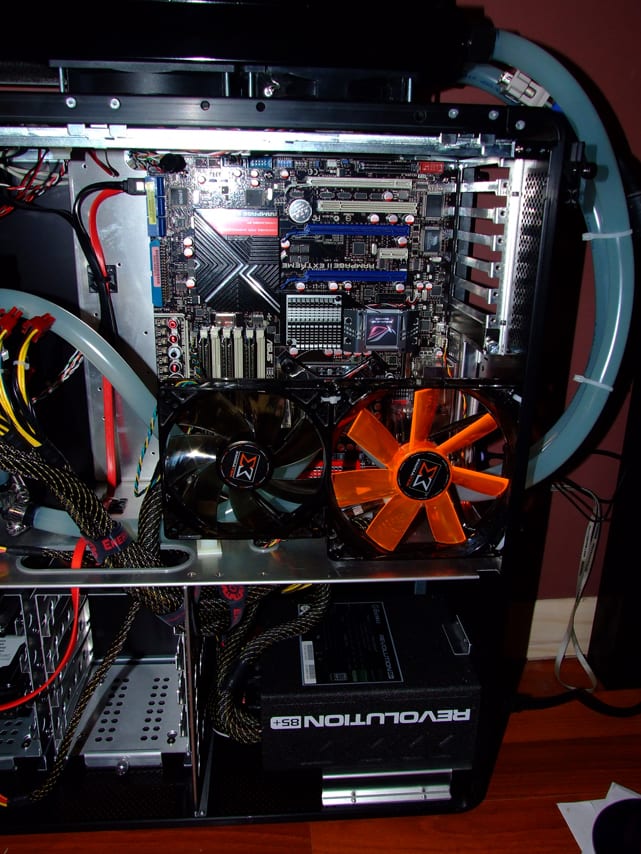 The motherboard installation went flawless, as usual. Then comes the video cards, line up the first GTX 285 clip it into place…Houston, we might have a problem. Most cases that utilize an ATX motherboard have seven component slots available. And in most instances, the first of those slots is unused. Now at this point, the pictures I had seen of the RIIE flashed into my head, I knew that the separate Supreme FX sound card was located in the top PCIe 1x slot. Now one can assume that the “normal” vacant slot would be the perfect location for that nice little soundcard, evidently that slot is missing. They decided the soundcard should go in the second slot, normally where video card #1 starts. So I’m down two slots from the get go, a quick bit of math in my head, and a quick glance to make sure I wasn’t hallucinating, told me that I would be one slot short of a full load. Insert expletives (many). Strike one for the RIIE. 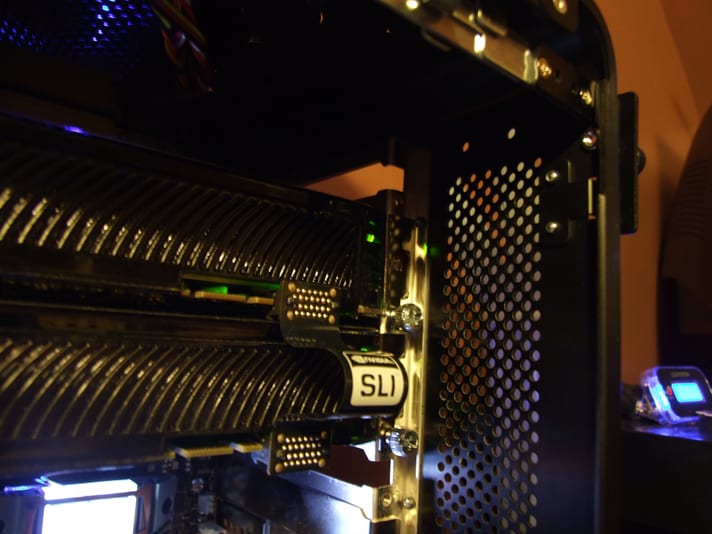 Obviously the problem would not exist, with single slot video cards, but those cards are usually not an option for the people that are in the market for this board. Dual slot coolers are quickly becoming the norm, for even mid-level graphics cards. A case with more expansion slots would also be a fix, however good luck finding one.

So I sucked it up, and decided I still wanted to see what this board was capable of. I used a single card to install windows, and began playing.

Upon entering the BIOS, the differences between the eVGA and ASUS are immediately apparent. If I were to label the two, I would say that the eVGA is Technical and the ASUS is Layman. They offer most of the same controls, but ASUS uses language that is much easier to understand and seems a bit more user friendly. The OC profiles are easy to label and use. I immediately liked the addition of the LCD Poster, that tells where it’s at in the post cycle. The one thing that I love about the RIIE (or any Asus for that matter), is the Crash-Free BIOS feature. If it doesn’t boot, hold power to reset, and it’ll boot back up at the previous speed. It couldn’t be any more convenient for overclockers. +1 for Asus BIOS.

All versions of Windows installed (XP 32bit, Vista 32bit, Windows 7 64bit). Dual boot on the SSD for the benching drive (XP and Vista) and a separate HD for the everyday OS (Win7) after driver installations I decided it was time to overclock. Bring on the fun. So I boot up at some safe 200 bclk setting and set 21 multi that the RIIE offers.

Being a BIG fan of the eVGA software overclocking tool, ELEET, I was very interested to see what ASUS had to offer, and it comes in the way of Asus TurboV. Initial impression is that it’s a nice GUI, its colored and it uses sliders. It lacks a few of the features of ELEET most of all it is integrated with CPU-Z for the Main and Memory tabs. Again, I would say that the eVGA approach is more technical in nature; this is built to be user friendly and visually appealing. So let the user friendliness begin, touch the little arrow to the right, bring it up to 210, hit apply, and watch it freeze. Great, maybe I got a little carried away, let’s try it again, reboot, and enter the BIOS to make sure I had enough voltage there for what I was trying and that I didn’t forget anything. Upon entering the BIOS I immediately noticed, that what you set in TurboV stays, even through a reboot. My base clock was bumped up to 210, so I set it back to 200 and rebooted into Windows. Maybe I was too aggressive last time, let’s try baby steps, 204, apply, freeze, rinse and repeat, 202, apply, hey it worked, try and bump it again to 204, apply, freeze… Hmmmm. At this point I would like to state that, I know what my 920 is capable of under water or on air, and what voltages it needs for operation at these speeds. The voltages I was using, should have taken me all the way up to 4.6GHz. So after many more tries, and in frustration, I call it… Strike two for the RIIE.

After the failure of my TurboV attempts, I decide to stop piddling around in Windows, and clock it up in the BIOS, to see what it would do. On the eVGA, a fairly normal 3D benching session for me would be, boot at 215 with HT on, or 220 with HT off, depending on what 3D bench I was running. So I keyed in 215, saved changes and reboot which it booted right up; and “quickly” I might add. Nice compared to the extremely slow POST of the eVGA boards. Let’s try higher, 218 again, booted right up. OK. 220, once again, it doesn’t disappoint. At 220, I ran a few lighter benchmarks, all is well. Let’s keep going, 224, a speed I would normally run for 3Dmark 01, no go, thank you Crash-Free BIOS. I forgot I had HT on HT off this time, let’s go 224, nope. I check my voltages, all seems well, and so I pad them a little bit more. Let’s try 222, just to be safe, nope. OK, 221, nope. OK, back to 220, boots just fine, like nothing ever happened. While in Windows, I decided to give TurboV a try again, still having the voltages ready for more speed, I tried 221, freeze. This continued for another frustrating hour. I tried everything, even voltages that would normally let me run 4.8 to 4.9 GHz. I tried any and every combination. It began looking more and more like a board limitation, and ultimately that was my conclusion. 220 Base Clock wall…Strike 3 for the RIIE.

Now the RIIE also comes with the TweakIt feature, a nice little toggle switch on the motherboard, which allows you to make changes on the fly at a hardware level. I looked at it, I played with it, as it stands it can offer me nothing. I don’t need it unless I’m above a 220 bclk, and we’ve already established this board can’t make it there. Potentially it could be a nice little tool, an easy adjustment point for on the fly speed tweaks.

Now don’t get me wrong, the RIIE is a great board. It’s well constructed, with very solid components, and for anything less than a 220 base clock, it would serve most people VERY well, as long as you have 2 video cards or less. For me, however, it falls short of my expectations, far short. I may have high expectations, but I don’t think they’re unreasonable.

For now, I’m through with my adulterant ways.