It’s that time again!  On August 7, I, along with several other members of the overclockers.com community, will be returning to Los Angeles to compete in the North American finals of Gigabyte’s annual overclocking competition, GO OC 2010.  MIAHALLEN came in first place last year, and I took the second place position.  We both went on to compete at the finals in Taipei, Taiwan.  This year we’ll be seeing some familiar faces, as well as some new ones.  See the official press release below for event details including prizes, hardware info, and a chance to win some nice prizes!  Stay tuned for a complete list of overclockers who will be competing this year. 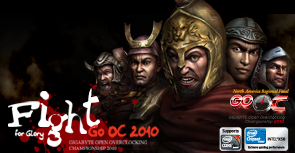 City of Industry, Calif., July 20, 2010 – GIGABYTE TECHNOLOGY CO., LTD., a leading manufacturer of motherboards and graphics cards is pleased to announce the regional finals of the 3rd annual GIGABYTE Open Overclocking Championship (GO OC 2010) are currently underway globally, with the North America Regional Final to be held at the Pacific Palm Golf Resort in City of Industry, California, U.S.A. on Saturday, August 7, 2010.

The GO OC 2010 North America Regional Final winners will not only have the honor of representing North American at the GO OC Global Final, but will also receive grand prizes of special designed GO OC system hardware valued at well over US$3,000 sponsored by GIGABYTE, Kingston, Thermaltake, iBuyPower and CyperPower.

Spectators who are not able to make it to the North America Regional Final will be able to follow the event via a live broadcast and videos provided by Overclocking-TV: http://www.overclocking-tv.com/live. Stay tuned, the Fight will begin soon!

Make your prediction, get a chance to Win over $ 1,000 valued prizes

From July 21 to August 5, 2010, GIGABYTE will host an online competition: “Guess the winner” at the GO OC 2010 North America Regional Final website. Just sign up on the GO OC official website (http://gooc2010.gigabyte.com/north-america/guess-winner.html ) and make your prediction for your chance to win GIGABYTE X58A-UD5 and X58A-UD3R motherboards, a cash prize of $200 for 1 winner, a cash prize of $100 for 3 winners and a GO OC Limited Edition T-shirt for 3 winners.

Gigabyte, as we all know, was one of the first motherboard manufacturers to roll out a solid implementation of USB 3 and SATA 3 in their products. In fact, Gigabyte now has an “A” option for most of their products. But since the devices capable of utilizing these higher speeds are still out of my reach, USB 3 and SATA 3 testing will be included in part 2 of this review. This part will focus on something I’m more concerned with anyway, and that’s overclocking performance.

As esports around the world takes off in one way or another, the OC eSports is in full swing at Hwbot. GIGABYTE has put together another overclocking competition in time for “March Madness” (for those that don’t care about sports, March Madness is another name for the premier NCAA College Basketball Tournament – Its MADNESS!). Below are some details and links for the competition. Go get ’em!

It has been several weeks since we had an opportunity to review a Z170 board from our friends at GIGABYTE, but, I have to imagine the wait will be worth it. We (and by ‘we’ I mean Mattno5ss) previously reviewed a mid-range offering, the Z170X UD5 which turned out to be quite a good board. This time around, we get to focus on their flagship overclocking board, the venerable, Z170X SOC Force.

Unfortunately, I won't be going this year :(

Best of luck to all this years participants :cool: