When I first started looking into things like Overclocking, Modding and generally voiding every warranty that I had, there was a word that the O/C Forum seemed to be obsessed with, one phrase that kept confusing me – FOLDING.

There were posts about “I found this PC I bought for next to nothing at a garage sale and it’s only a P200 – it’s useless” with replies about “Never mind – you could always use it as a folder”.

A Folder? You mean take the stuff from the inside and keep papers in it? That’s mad!!

It turns out that the term ‘Folding’ has to do with a shared computing project, but this got me thinking… can the PC I’m planning to build be a folder in its literal sense?

I set to work planning my rig – not a high powered gamers rig designed for Unreal sessions and high benchmark scores, but for internet, word processing and small games – and quite possibly for folding too.

The plans for this started when people were beginning to make unique and functional cases for a small motherboard factor (SFF) known as Mini – ITX. These boards (the majority made by VIA, under the brand name of Epia) measure 17cm x 17cm and are fully featured with a 800 MHz processor pre-installed (but unfortunately permanently attached so upgrades are impossible). Features include builtin LAN, VGA graphics, TV out and sound – all for only £80.

A few bank holidays at double time got me enough to pay for this piece of kit, as well as the memory and other stuff. 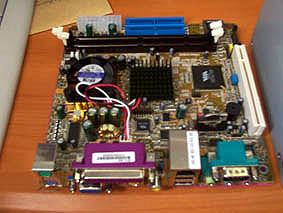 These boards use a mere fraction of the power needed by today’s high-end machines, so a small 150w PSU was needed. I wanted to keep it small to keep it in proportion to the motherboard, so I looked at Flex-ATX power supplies- but they were too bulky for my needs.

When I found a UK site that sold the Mini-ITX boards, they also sold PSU’s that were designed for 1U rackmount servers. As it was only £35, I snapped one up, at the same time as buying my motherboard. 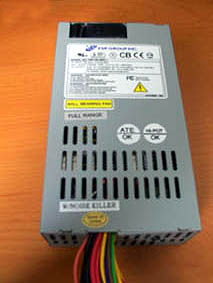 Although not shown in the picture, there’s an ATX connector, three standard Molex connectors and one floppy drive sized plug. It’s also a Sparkle PSU, a reputable manufacturer of full size PSU’s – I hoped the 1U version was the same.

The other (valuable parts) I had procured were a Fujitsu Hard Drive (13 gig) and a MSI CDROM drive, both purchased from a friend of mine for a total of £25 – and he even threw in a large PCI exhaust blower too. The bonus in this is that the hard drive had a copy of Win XP already installed – but obviously this will have to go – I don’t have the CD and I want to partition the drive for Linux too, something I will need a proper Windows CD for.

I couldn’t get the hard rive until last – and being an impatient kinda’ guy, I wanted to get playing with my new bits… this is where a copy of Knoppix came in handy.

Knoppix is a Linux Distro that runs ‘live’ from the CDROM, effectivly eliminating the need for a hard drive. There are some great games on there (great = retro) and it’s quite easy to use if you have never even seen Linux before (like myself).

As I set about planning a case, I thought about making an aluminium one from sheet metal available from a local store, but funds were limited and I didn’t have the suitable equipment to bend the metal to a desired shape. I remembered the phrase that started it all off…… “Folders”, glanced up at my wall and sitting on a pine and chrome effect shelving unit was an A4 box file – basically a sturdy cardboard box full of important papers.

The A4 box folder – with CD for size comparison.

The important papers weren’t in the box for long – I spilled the contents over the bed and my PC parts were placed in a reasonable fashion in the relatively small folder. To my surprise, EVERYTHING FIT! Then I remembered that I had not put the PSU in yet – the box was about an inch too small, needless to say – I WAS PISSED!!

I now had my motives set on having a folder IN A FOLDER and I hunted high and low for a box file that was slightly bigger than A4. I had no luck in the normal stores, so I took a trip (30 min bus, then a 20 min walk each way) to Staples, a stationary store that claims to have anything an office needs. So I walk in and look about, plenty of A4 sizes – in all the colours of the rainbow but alas, nothing bigger.

There was a cute woman on the customer service desk, but she was neither useful – nor ornament – to me. Totally unable to help, her friend (a nice lady indeed) picked up a special order cataloge and immediately went to the correct page for folders and found A3 (double the size of A4) folders, but here’s the killer… only available in pairs – and its £35 per pair. OUCH!! The A4 ones go for about £1.50 each.. There MUST have been a typo there, right? WRONG!!

The Lady was as shocked as I was, and saying a few words about those “morons upstairs and being back in a bit” ducked into a back office and emerged with a large black box – it was an A3 box file with writing and stickers all over it.

She said that it was being used to file promotional material, but as they were having a huge sort out at the time, it was going to be thrown away… it’s now being thrown in my direction. That nice lady really made my day.

On my way home, I decided that I needed a new toy to help me with my operation, and it’s name was Performance.Pro Rotary Tool (A.K.A a cheap imitation Dremel, available for £15 as opposed to the RRP of £60 for a similar Dremel). So I head home with a big box in one hand, an encased rotary tool in another and a carrier bag of aluminium edging, brackets and extra cutting discs tucked away in the box (with the corners of the edging sticking out at a violently dangerous angle).

I also popped into a small computer shop I noticed on a street corner in town (a small spares/repairs kind of place with loads of busted parts littering the ‘office’ and posters of half naked women on the walls). I asked if they did power LED’s and switches.. They didn’t sell them, but after explaining why I needed them, they were more than happy to rip a few out of an old burned out 486, only a quid for two LED plugs & a switch.

I almost got me a cheap hard drive, but they were on a table of parts with a notice “Bargain Table, Make Us An Offer”. They are sold ‘As Is’ and I didn’t want to gamble with size/reliability and another £25. I finally made my way home and got nicely drunk – it was a Friday after all.

It took all day (next day – I never do PC stuff when I’m drunk, but with a hangover, it’s a different story) to plan and mark out where I was going to cut my holes, and not long after I started I struck a problem – these boxfiles aren’t made of 100% cardboard… the thicker walls on the front and sides are made of wood, proper wood. If any of you have yet to attempt cutting wood with a dremmel – buy a facemask and do it outside… it stinks!!

But once everything was cut, trimmed and sanded to a decent level, everything was cleaned off and my aluminium trim glued on (I need some more of that actually – 3 meters isn’t enough) it was time for the installation.

Everything slotted in nicely – the front bezel of the CD Drive stopped it from sliding back into the case. The template of the rear panel of the motherboard fit (almost) perfectly and a spare piece of wood was glued to the floor of the folder to stop the PSU from sliding about.

The big pain was from my hard drive. For some unknown reason, the temps of the hard drive was WAY too high, in the high 40’s at least – so some small heatsinks were purchased and placed with some thermal paste on the offending chips on the underside of the drive, which was mounted on small brackets in a fashion similar to four legs.

These brackets also allowed me (with the use of nuts & bolts) to firmly secure the drive to the side of the box and to fit a small slot blower to get rid of some of the hot air that I’m sure was going to form under the drive – this is the noisiest fan in the box, a quiet version is coming up later I’m sure.
{mospagebreak}

Now everything was in place – there was only one thing missing.. A monitor. I didn’t have a spare £100 to get a new one, and I’m wary of buying things like monitors second hand, but one of my girlfriend’s workmates happened to have a spare monitor laying about after her little brother needed an upgrade because “Quake3 looks rubbish on that 14inch piece of $***, I need a better screen”. And he was right – I can’t even get a stable resolution any higher than 800 x 600.

It’s been abandoned in her bedroom for about 3 months and she was happy to just give it away – but I slipped her a little something to say thanks and before people start questioning my integrity – it was a £10 note. 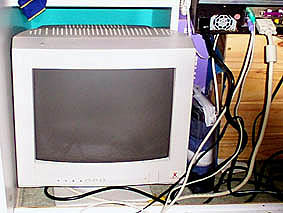 But I still have a problem – the finished product (the A3 folder) is too big to fit where I was going to put it. It was off by an inch, but on the outside this time, so once I get enough money together again I’ll be getting a laptop CD drive and that should allow me to put everything in an A4 box – all that hassle to get that A3 one and I’ll end up wasting it… but I tend to take after my Dad, a ‘temporary measure’ ends up lasting indefinitely. But it’s happy in its current place in my wardrobe – still accessible and playable where it is.

However – is this folder Folding?? I’m afraid not – I bought a modem from Captain Slug via the O/C Forums, but stupid me forgot that I can’t connect any more devices to my phone line – so I’m stuck using Internet Connection Sharing with my main PC for the time being, which is annoying. However, now that I’m done for this academic year I should have more time to fiddle about and get everything to work properly.

So how much did my little venture cost me? Here’s the tally:

And once I get a copy of Windows, you can expect to have that almost doubled (maybe I’ll stick with Knoppix). And without further ado – there’s the few pics I have of the new Folder Box:

The Front – everything within easy reach. 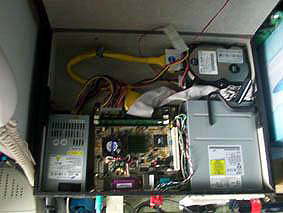 Inside The Machine, featuring the expected nest of cables, there’s a large slot blower in attached to the lid with strips of velcro (out of shot).

Top View, another CD for comparison. The hole on the right is a slot blower aimed over the Northbridge & heatsink.

Update 5/10/99: Just an update, The Leadtek 8200BX board has been running without a hiccup since last week with Dual PII 400’s Clocked at 450. The Server has been getting alot of use too as this is where the Classified

These are the major ones I’ve found so far. The bad news is they exist. The good news is there’s a happy ending at the end of most of these issues. Multiplier Issues There’s definitely a problem here, this is