I just got a new IBM 75GXP last week and it is an incredible upgrade from my old 5400 rpm drive. But all that extra speed generates more heat than a slower drive. I wondered just how hot it was getting, so I placed the Abit thermistor in the slot under the hard drive and monitored the temp after some normal computing.

After about an hour, I realized the temp stabilized at 39-40 C – a little too hot for my taste. So I decided to do make a simple hard drive cooler from an old 45 mm Pentium 233 stock fan.

First I removed all the drives from my box, and then removed the 3.5″ bays bracket: 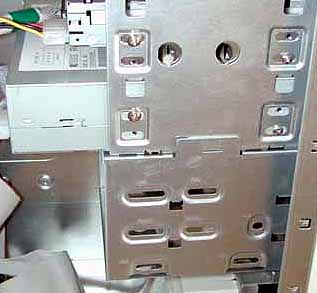 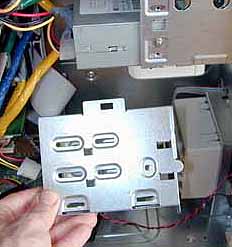 After removing the bays, I place the fan on the bottom of the bay bracket and traced the inside and outside with a fine point sharpie, and started cutting a hole with my Dremel tool. You can only cut straight lines with the cutoff disks, so the hole was pretty rough, but then you can smooth it out with a grinding bit: 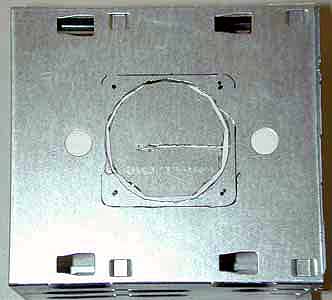 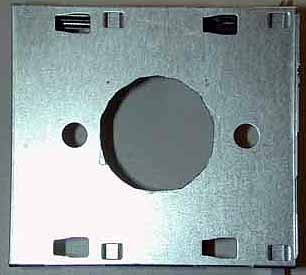 I was originally going to secure the fan with screws, but there is little vertical clearance in the 3.5″ bays and I was worried about the screws contacting the underside of the drive. So I decided instead to put a drop of strong adhesive at each corner, totally secure for such a light little fan, yet I could still snap it off if I ever needed to.

You could also drill the holes and use plastic zip ties. Here is the completed cooler, set up to blow air toward the bottom of the drive, which I then installed it so I could begin testing: 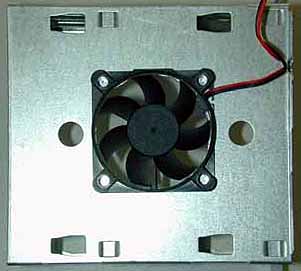 I placed the Abit thermistor in the slot under the hard drive screw. I positioned it so that it would be close to the center of the drive, yet not directly over the fan. 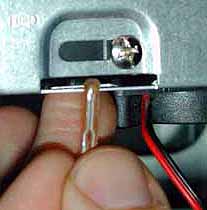 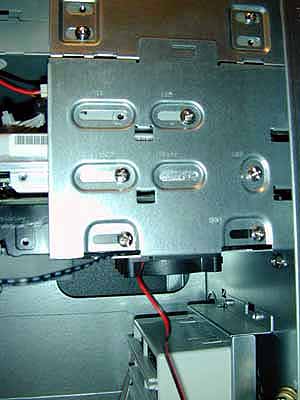 To test, I first needed to accurately document the HD temp without the fan, so I left it disconnected. I then booted up and configured Motherboard monitor to log temperatures every 5 seconds. In order to get the drive spinning and warm, I did a drive benchmark with SiSoft Sandra, and then used Windows “Find” to search for a file that I knew didn’t exist. I then let it sit for about an hour before I copied the log file into Excel.

Just as I previously noted, the temp was a stable 39-40 C. To really see if the cooler was effective, I decided to not the let hard drive cool off before turning the fan on. This way I could see how low the fan alone could drop the temperature, rather than starting from a cold drive. I just ran it long enough to bring it down to near case temperature since the results were so obvious and the response was almost immediate.

That little gap under your hard drive can trap a lot of hot air! As you can see, the temp gradually increases from startup to 40 C, and then when the fan is turned on it makes a sudden drop. My case temp is steady at 26 C and now with this simple cooler my hard drive runs at the same temp, a 14 degree C difference!! I think this graph is evidence enough for the power of even a tiny fan like this: 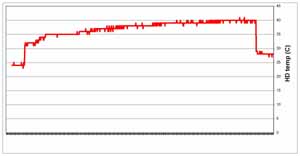 After this test, I’m now convinced of the importance of hard drive coolers for high speed drives. Although 40 C probably isn’t an unreasonable operating temperature for such a drive, running at 26 C could extend the life of the drive considerably. There is very little air circulation in the space between drives and at the bottom of the bay.

I did all this in about two hours and it cost me nothing. If you had to buy this fan it might cost about $5. If you’re not the type who likes to cut holes in your case, then consider purchasing a hard drive cooler – they run from about $15-$40.

MS filed a patent application about 18 months ago detailing a means of pay-per-view PCing.

Here is my home made review of this (not so) portable computer. I got this laptop for free when I was working in IT for a big airline company here in Canada. They were about to change all the laptops