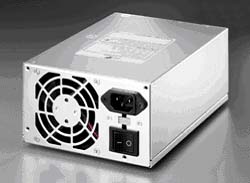 Overclocked gaming or benching rigs with a pair of high-end video cards in Crossfire or SLi and a dual-core processor can greatly benefit from high-power, high-quality server supplies that produce clean power under the harshest conditions. In a lot of cases, even the strongest name brand “gaming” power supplies just can’t keep up with power demands of overclocked high-end systems. That type of situation is exactly what led to obtaining this 700W Zippy PSL-6701P from Servercase.com.

After a short three months of heavy use, a popular name brand 600W PSU failed. Compared to the failed PSU, the intent of the Zippy is clear: all work and no play. Instead of LED fans, shiny or painted cases and sleeved cables, you get a power supply that’s sole purpose is to power big systems reliably and the last time we checked, power supplies were a critical system component, not an accessory to make cases look better. 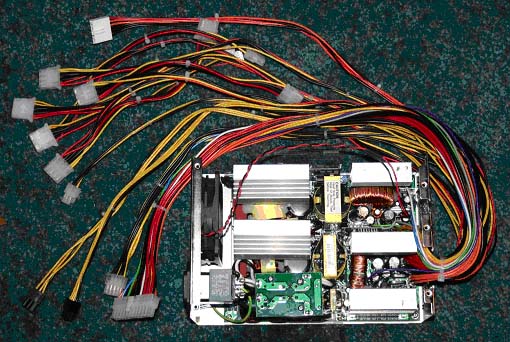 The brawn of the Zippy PLS-6701P is immediately apparent when comparing it to the previous PSU and if you could hold both, you would feel that beefiness with the Zippy weighing twice as much (10 pounds) as the old PSU (5 pounds). Clearly, the Zippy is quite a bit longer than the average PC power supply, which may be an issue if you plan to stick one in a mid-tower case at home.

ATX power supply design reference size is 140mm x 150mm x 86mm. Some manufacturers already take liberties with the length, stretching them out to 175mm, but the Zippy is hardly even close, measuring a very long 220mm x 150mm x 86mm, so make sure you have room for before purchasing one.

There are enough cables to power up anything you will ever need and alternate cable configurations for dual XEON processor platforms are available. Standard cabling supports ATX 2.03, ATX 12v(P4), EPS12V, WTX, AMD-GES:

Specs and Feature of the Zippy PSL-6701P

Ever wonder how a $30 power supply has the similar specifications as a $300 supply? There are many tricks in arriving at specification numbers, but rest assured that good looking specifications based on testing done with easy parameters does not make a power supply anywhere near as good as a PSU producing similar numbers under much more harsh conditions.

In the following specification chart you can see the massive current available on the 12V rail. Few enthusiast PSUs are over 36A for single 12V rails, so 45A is very impressive and useful, since a high-current 12V rail is crucial for overclocking today’s processors and top-end video cards.

You should also note that ATX specifications require no more than 120mV ripple for +12V. Ripple represents how “clean” the output power is and, as you can see, the Zippy’s maximum specs are 17% lower than the required maximum, indicating their commitment to and delivery of high-quality power. As you will see later when testing under real world conditions, measured ripple is substantially lower.

Powering up the unit revealed one very loud fan that is easily louder than an x1900 fan running at 100%. Keep in mind this is a server supply and not designed for the enthusiast market, so noise is not a consideration in the design. Why a single fan for a power supply this large? Multiple quiet fans to do the same job with a reduction in noise require more space. In most cases, making room for extra fans requires a compromise in design and construction of important internals, such as smaller heat sinks, caps and coils. As you will see, even with such a large size Zippy has still made full use of every square centimeter gained by using extremely hefty components in place of extra fans.

Real power and reliability can only be obtained with massive, heavy components and the Zippy has the guts to back up its massive size and weight. Cracking the case revealed massive aluminum heat sinks and even for its size, a very compact layout of power components and circuit boards. As one would expect, the PLS-6701P appears to use high quality Nichicon capacitors and Intersil Power FETS along with beefy foil traces, unlike some supply manufacturers that solder buss wire to the traces to increase current capacity.

The Zippy uses a 12V 3600RPM Sanyo Denki/San Ace 80mm fan. The fan utilizes a standard 2-pin molex, making it a simple swap for a more reasonable noise level fan with a 2-pin connector. On this unit, a more reasonable sounding PABST 80mm fan was swapped in which required soldering due to the PABST’s flying leads. 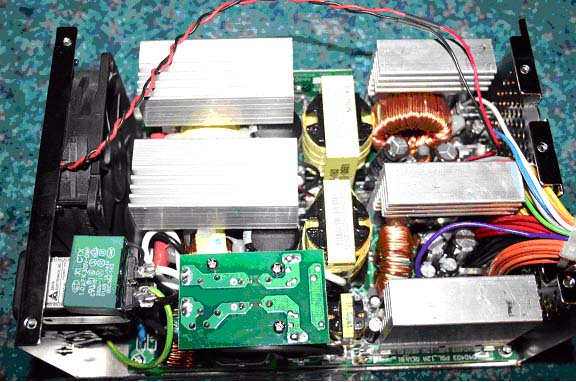 Checking the voltage with a DVM shows the 12v rail is at 12.15 during idle conditions. Since the 12v rail is the predominantly used power source for heavily overclocked and graphics systems, the plan was to load the PSU and find out how beefy the 12v rail was and what it would take to drag it under 12.0v. A load test connecting ballast resistors was done to check stability of the rail under various loads and find out when the overcurrent limits of the supply were reached and how well voltage regulation was held. 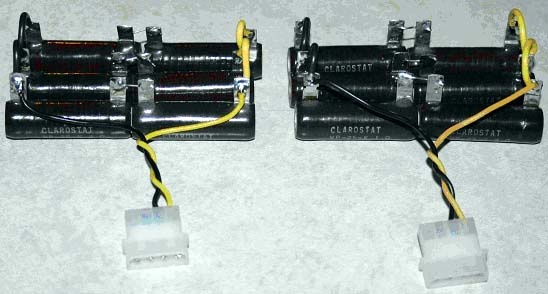 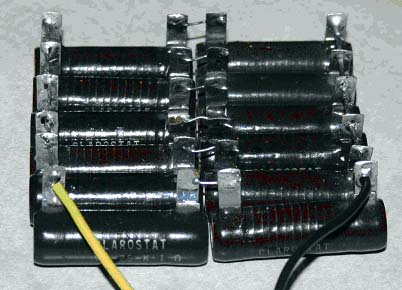 The supply was run through its paces starting with an initial load of 10 AMPS, followed by incremental loading of 5 AMPs, until the overcurrent limit was reached. Voltage was logged after the load was applied and the supply was running for 3 minutes.

At 52 Amps, the supply overcurrent limit tripped and the supply shutdown after 15 seconds. It’s possible this current may have been maintained for a longer period with the original fan, but we believe the supply held up exceptionally well above the nameplate current maximum of 45 AMPS. It should also be noted that the full load amperage rating was maintained with only 50 millivolts voltage drop from the minimum load draw.
{mospagebreak}

Next was an extended burn-in period of 8 hours at 45 AMPS which passed without failure. 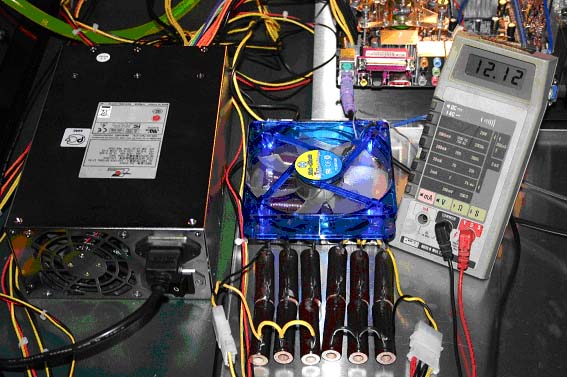 Stress testing with ballast loads don’t produce the dynamic loading conditions on the supply as the rigors of a heavy workout in a highly overclocked, graphics bench environment. Although we did not have dual x19000s to simulate maximum draw that a crossfire setup demands, we ran an extreme benchmark with the 300W ballast load connected to check performance under real conditions.

First up was a 5.00 GHz OC and a SPi 32M run which resulted in a minimum reading of 12.12 on the DVM. Next was adding a 760 GPU/860 MEM OC on the x1900xtx and a quick bench with 3DMark05 which resulted in fluctuations between 12.10 to 12.12V. A try for Quad SPi32M running on 2 physical, 2 logical cores while benching 3DMark05, but the test rig cannot handle the load with only water cooling. Until some more extreme cooling allows for it, the Zippy’s beefy 12v rail has easily held up to a substantial 500W total load on it. 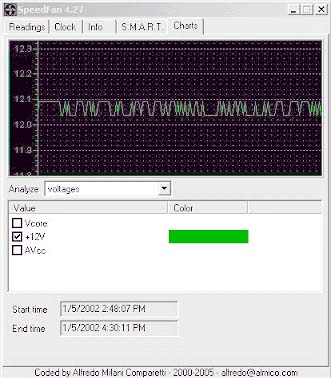 Clean power – we’ve mentioned it several times. In addition to a lower electric bill, another benefit of the Zippy was the lower temperature of the MOSFETS supplying power to the CPU. The Fluke 81/8020 DVM recorded an 8-12ºC decrease in temperature over the previous gaming PSU, as measured on the case of the MOSFETS. A quick scope check on the rail shows the likely reason for this.

Recall we had before pointed out that the maximum 100mV ripple specified on the 6701P was substantially less than the ATX specification limit of 120mV. Since the PSU specs are measured during testing with tougher conditions that seen by us, the actual ripple measured only 40mV during max load. That is only 40% of maximum specs for the PSU and only 30% of what is deemed acceptable by current standards. Clean power. 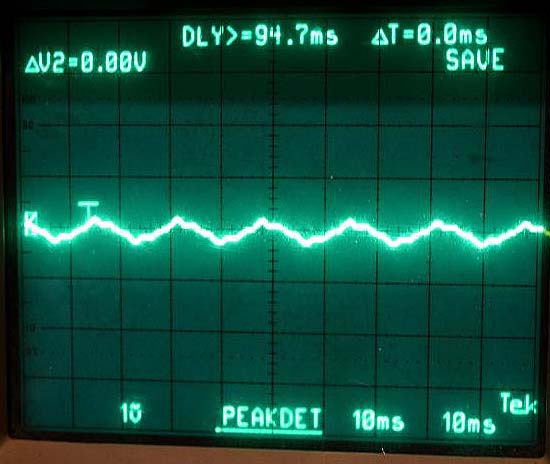 The PSL-6701P is one of the finest single rail PSUs on the market today and has the performance and reliability for the PC enthusiast needing to exceed the 5GHz barrier.

It’s a great feeling to know you have the power behind you when pushing systems to the edge of their capabilities. The guys at Servercase.com are great and this unit shipped the same day the order was placed. Three emails were received during the day confirming the status of the order from the time it was placed until being sent out for delivery. The only negative comment on this PSU is the fan noise. Size cannot be deemed a negative factor since it is not being used for environment for which it was intended, but size should definitely be taken into account before purchasing one for a standard PC case.

When Is the Second, Coming?

We spoke a little while back about the second generation of 90nm Hammers. Now we get a story which looks to be the AMD spin on this, and I do mean spin. Let’s do a little call and response on

Do you ever find yourself not enjoying your video game genocidal spree as much as usual because you’re not really killing? Do you tire of killing what after all are usually figments of somebody’s imagination? Would you like to go

The Inquirer has an interesting article today which says that AMD/ATI might be considering the creation of what I call the video box In short, rather than attempt to stick a lot of hot video cards inside the PC case,