I would imagine most everyone who visits this site, and others that have an overclocking theme, have a kick-around box. You know, the one you try new equipment on, new RAM, new CPUs, new heatsinks. Well, I have one too. In my case (no pun intended), I have an older Abit BX6-r2 motherboard.

I had no specific use for it. It’s taken over as my Everquest box (back
when I still played), served as a guest LAN game box, and even acted
briefly as my VCR, using a Radeon AIW. Nothing earth shattering or
amazing. One other function it had was to burn in/test new CPU and
heatsink combos.

Don’t get me wrong – I don’t do the sometimes exhaustive tests that the gang here at Overclockers do. Mostly, its taking new CPUs with known heatsinks, or vice versa – test the results, press on.

Sometimes I keep what I test, sometimes it ends up in my Mother’s computer, the Father in Law’s computer, or new to our household: My son’s computer (a blazing P-200), you have no idea how “Bob The Builder” or “Winnie the Pooh” can tax a systems L2 cache (sarcasm intended) ;->

At some random point in the near past, I picked up a Volcano 7. What was
noteworthy was the argument I had with the local shop drone (a nice guy,
really) – his concern: It wouldn’t go onto my slocket, or miss some other
clearance. He had a good point, but I knew my hardware and ended up
without any problems.

It was my first copper-insert heatsink with a larger fan, and one I could goose to maximum output with a simple modification to
the thermistor. Why did I buy, you ask? Didn’t I read the Overclockers
heatsink summary table? Didn’t I see the relatively poor performance
compared to other brands?

Yep. Sure did. However, a couple of factors must be weighed in:

So what was the point? #2 above was the point. Also in the recent past, I
purchased a Celeron II 900. The entire Celeron series has been fun for
overclockers. I would even suggest more significant than the introduction
of the more recent AMD CPU’s, but that is a whole different conversation.

Okay, so we have one of the “standards” (IMHO!) of overclocking
motherboards, a value processor, and a recent value heatsink. What
additional value could I get out of it ?

The initial tests disappointed me. In this, I gently increased the bus
speed of the BX6r2 and tried to start the system. Standard fare. In every
increment between 100 and 133 (excluding 133) with the most conservative
settings (i.e., 1/3 or 1/4 PCI divider where appropriate), the system failed during POST or on the boot loader of the tested OS (I jumped between Win2K, and WinXP).

This ticked me off. This was a BX6r2, dang it! What was I missing ?

Then I tried 133. Success! Cool! Everything was fine until after I loaded
the OS and proceeded to heat the system up (playing Everquest for half an
hour or running SiSoft Sandra’s burn in wizard for 24 hours @ max
utilization).

In short, the system failed within 5 minutes of either. Cool! Heat issue! I know how to deal with this: Cut that damn thermistor off and hard wire the fan! Ha!

It worked! Ha! 1200 MHz off of a $50 CPU! WOO! As usual, the wife
listened to this story with the enthusiasm and excitement of a rock. OK,
fine, it’s not earth shattering then. There was a downside though:

Basically, as reported here and elsewhere, you cut off the thermistor,
hard wire the leads going into the fan and you get 4500+ RPM, ~45 CFM of air – but you also get 60+ db of friggin noise!

I didn’t really appreciate some of the concern about noise (e.g., the Delta series of fans) until I heard this little fan’s racket. Even with the case mods I make (extensive noise reduction), it still sounded like an 80mm jet engine in the room. I didn’t put the thermistor back, since I really wanted the 1200 MHz, so the machine mostly stayed off. No big deal

Well, a couple of months later I discover I have some time to putter
around. After obtaining my second Antec SX(600?) case and putting in all
the noise dampeners I do, it was time to revisit the screaming little
heatsink. I had few choices. Either: Go back to 900 MHz and use a stock (
but QUIET ) Intel heatsink, or spend cash and get a SK6 or newer Alpha to
deal with it. I committed to going back to 900 with the Intel heatsink.

While I began disassembling the CPU complex, I got to wondering, purely out of entertainment (really !) since the fan that blows down has a huge void of airflow right where the CPU core is, I wonder if I try to attack that, can I solve this problem ? At the same time, I was eyeballing a couple of Nidec Gamma 28 blowers (the squirrel cage fan) I just retired from another project.

Hmm, I wonder how long it would take to fail if I used one of these to blow down into the heatsink, directly over the core location? It may not be a permanent solution, but I thought it would help me understand if I could change the fan config AND keep the overclocking results I had so far.

So, I yanked the fan off the Volcano and just stuck the Gamma on top of
the heatsink, blowing down the center of the fins. I booted the system and
wondered, “OK, at what point of POST would it fail?”

How long into loading the WinXp bootloader would it fail?

How long after the desktop would it fail?

OK, how many seconds into “Sandra’s” burn in routine (CPU and MEMORY tests only) would it fail?

How many repetitions of this test would it fail at? 10? No failure. 20? No
failure. 24 hours! That should kill it!

The fan I just removed from the heatsink, even though distribution
of the air wasn’t perfect, pumped at least 500% more air through the
heatsink. Here was this essentially tiny fan keeping a processor under 105
F (ambient in the room was 75 F), but more importantly, keeping it running!

Some of my friends have heard me state more than once “I’m not done pushing it faster until the CPU core glows from its own heat…”. I
didn’t care what the temp was, since I knew the fatal point, and the CPU
NEVER reached it!

Here’s a quick pic of the final result: 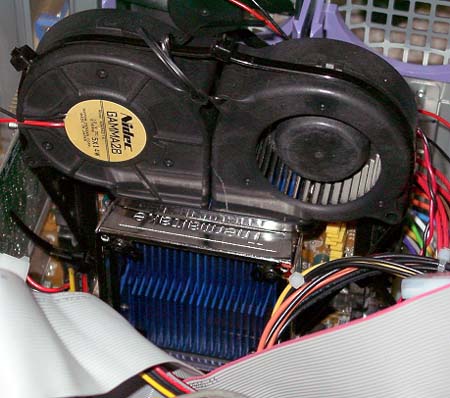 In short, every time I apply a heatsink combo, I will likely address how
the air is pumped through it. By using the Gamma Nidecs, I improved the performance of the Volcano 7, permitting me to retain a strong overclock and keep the noise just below the audible threshold.