NOTE: This article is for information purposes only. The author is well experienced to undertake this project. Opening and modifying a power supply as depicted herein is NOT recommended or condoned. Neither the author nor Overclockers.com will be held responsible for any direct or consequential damages resulting from any actions thereby.

A friend of mine scored a brand new ThermalTake 430 watt PS for free. He was not using it and consequently, the unit was gathering dust in its closet. I wanted to see what an old HEC

would look like because I figured odds are, an old unit like this one could be in dire need of a recap a la the infamous Antec TP/SP series of the same power rating. Without further ado, this is what I found. 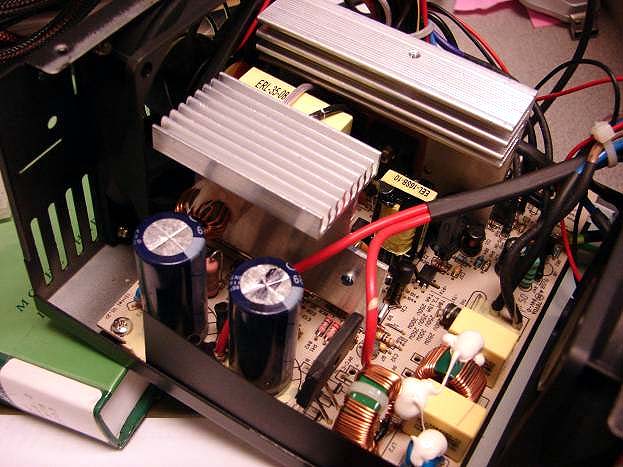 A clean but counter-intuitive layout on the primary side. Perhaps the layout with respect to the input is designed with optimal air-flow in mind. In any case, the red wires streaking across the breadth of the unit feed the primary side. Clearly, this unit has no PFC circuitry (it does have a 115/230V switch at the back and the pi filter/twin input cans are a dead giveaway) and is a bit threadbare. Of course there is not much you can expect from a budget 430W unit.

There is no elaborate EMI suppression (usually an LCR resonant filter bank at the source), but, part of the basic IEEE 587 standard for input surge suppression is adhered to (as evinced by the X-Y capacitor pairs). Note that the yellow blocks are actually capacitors which are rated to absorb several kJ (kilo Joules) of energy. The arrangement is referred to as differential mode transient suppression, since the Pi filter is between line and neutral. There is no MOV (metal oxide varistor) available. The little blue capacitors are typically 0.11 uF if the device adheres to UL 478 standards.

A single transformer is used for power distribution while a smaller 5VSB transformer can be seen next to it. This is a group regulated design in line with what you would expect from a budget unit. I’m not sure what kind of a transformer core is being used but given the thick and firm screening, I’d guess that it is an air-gap core device. The screening prevents leakage of EM radiation which can interfere with the working of the unit itself. 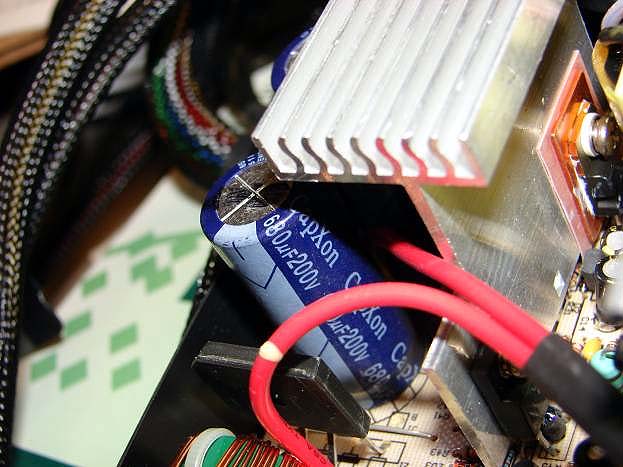 The primary side is populated by 2 x 200V 680uF CapXcon cans. CapXcon cans are used almost exclusively by FSP in their Epsilon series. I have not seen large scale failures, but there have been reports of heat induced failures
(Good friends at badcaps.net). I must mention that at first glance the cooling apparatus looks fairly decent and the heatsinks are by no means insufficient. Also, some sort of a TIM is employed to mate the power transistors to the heatsink. 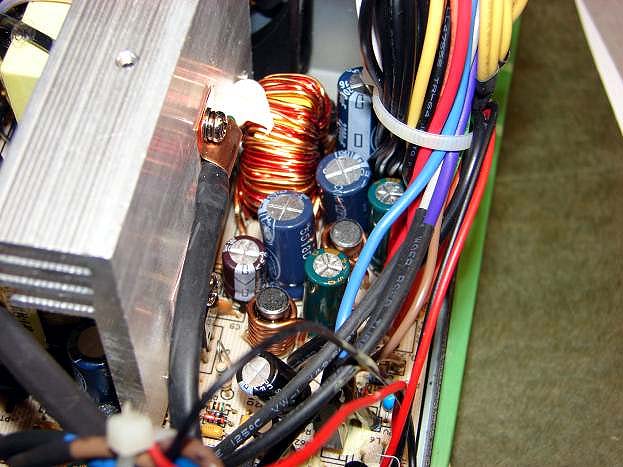 Moving on to the secondary side, we see a rather limited group regulated scheme. Something tells me the output filtering is wholly inadequate. The output coil is double wound to minimize core hysteresis/saturation and it seems that the capacitors are really tightly packed. You can see a Zener or two on the PCB. We can clearly see a thermistor encased in a copper sheath mated onto the heatsink.

Filtering is accomplished by means of a two stage LC Pi configuration. The first stage comprises of the choke and the 2200uF capacitor. The advantage of this configuration is that the large 2200uF capacitor need not be a low ESR type device. The choke handles most of the load current and seems to be a commonly used dust-iron/powdered iron core. The second inductor is the small ferrite rod wrapped in thick copper wire (about 16 AWG). The second capacitor however should have minimum impedance over the switching frequency and over the first few harmonics.

The second ferrite coil looks like a resonant filter, ie it makes use of the interplay between the dependence of impedance on frequency and the internal ESR to for a self damping circuit at the targeted noise frequencies. 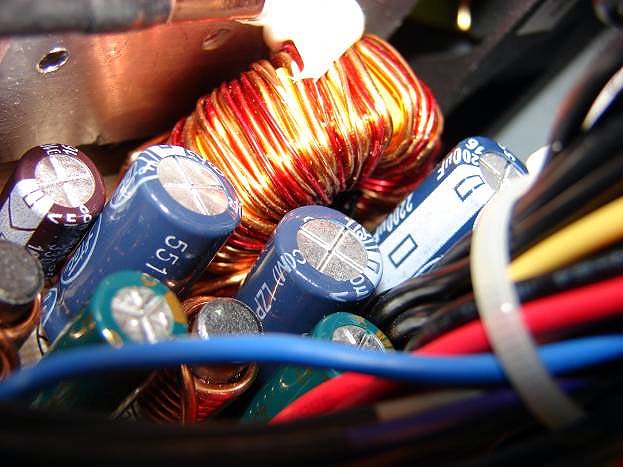 The choices of capacitors are highly suspect. Leading the charge is Teapo (ok in PSU’s), followed by the highly suspect Ltec with garbage Su’scon completing this cabal of mediocrity. What makes it worse is that these caps, apart from Teapo, are known brands of bad caps. 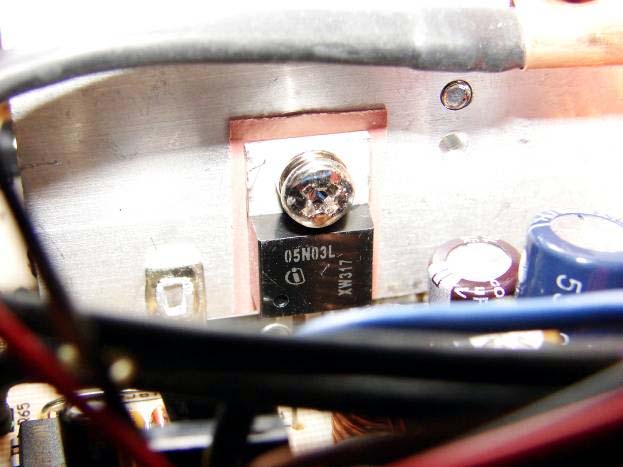 I was surprised to see only a single voltage regulator on the secondary side – what happened to the other one? As you will see soon enough, the MIA regulator is positioned in the most inconvenient and counter-intuitive position possible! 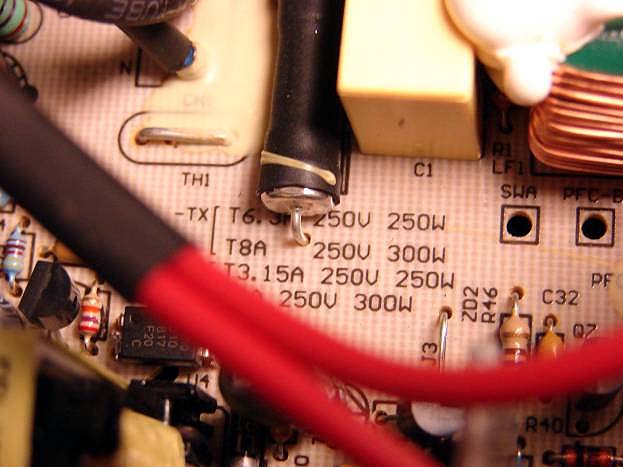 The fuse is soldered onto the PCB, making user replacement impossible. But it seems to be well protected should a flash-over occur. Pay close attention to the PCB – it is rated for a mere 300W. How can you pull an extra 130W from this design, given the especially poor choice of components? You tell me!

Time to replace the crapacitors with something a bit more beefy.

Ideally, it is highly recommended that one use the exact same ratings, ie voltage and capacitance, when making replacements. Now, when recapping SMPS devices one can get away with a lot of minor adjustments, as these devices are not as demanding as replacements made to high frequency lanes on say, a motherboard. Typically, SMPS units are limited to switching frequencies less than 500 kHz.

An intuitive way to make an order of magnitude guess would be to look at how the PSU is built. Older designs typically use lower switching frequencies and consequently necessitate the use of large/high value components. Physically, component sizes are much larger. For example, compare my Zippy GSP-6600P with my Silverstone ZeusST56ZF. The Zeus has smaller components, but harmonic suppression would necessitate the use of additional design criteria increasing the complexity of the unit. Smaller components are cheaper.

However, along with higher switching frequency comes the problem of component level EMI. Motherboards avoid this by having many layered PCB’s (necessary due to other design considerations, like separating analog and digital parts, minimizing cross-talk etc), but in SMPS devices, where current carrying capacity is paramount, PCB’s are not multi-layered (some good info HERE). 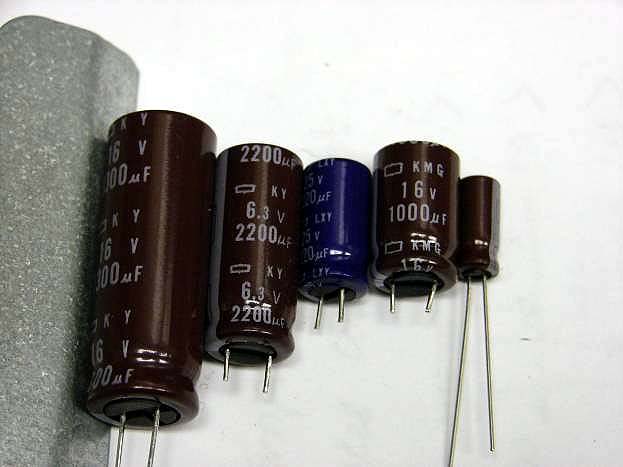 The good guys are all high quality Japanese capacitors made by United/Nippon Chemicon (UCC/NCC). 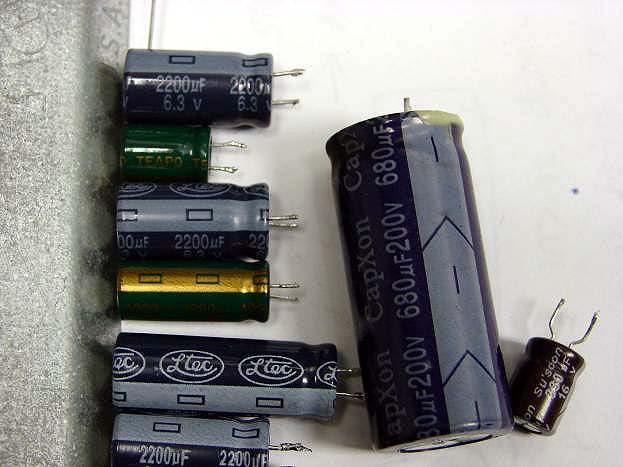 The bad guys have been taken out of action, as seen above.
{mospagebreak}

Choosing the right input capacitors for this application is rather easy if we go by the simplistic rule of thumb which states C>1.5uF/W (for non-APFC configurations only), where C is the input storage capacitor. Let us see where we stand in this regard vis a vis the stock configuration.

The stock configuration had a set of 680uF CapXcon cans. This is barely above the minimum recommended. There is very little margin for temperature induced de-rating to kick in. The replacements are at a healthy 820 uF, giving enough room to accommodate de-rating. In reality, selecting the right capacitor is not so simple, as one has to make a choice for specific RMS ripple current, Ripple voltage and Holdup time. 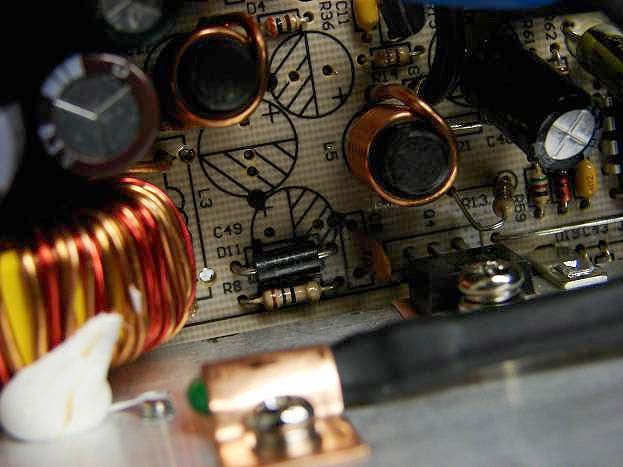 Quiz time: What is wrong with the above picture?

Look closely at the discrete diode towards the bottom of the picture. It sits bang on top of the slot meant for a capacitor. I removed the Su’scon which was wedged in there with long leads. Diodes like that get hot and placing them in close proximity to a Su’scon is asking for trouble. Clearly there is enough room to route the diode away from other components – I wonder why this was done? 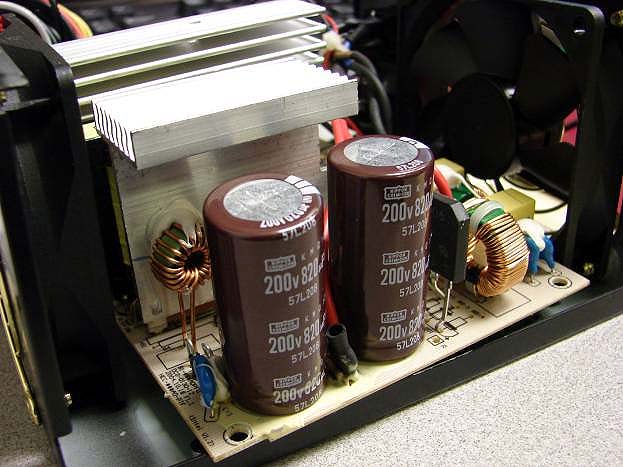 Primaries have been replaced with Nippon Chemicon. Note the bridge rectifier sandwiched between the toroid and the primary cap. I’m not sure how hot this rectifier gets in an SMPS setup, but from building linear power sources, I can tell you that they can get very hot, ie in excess of 60ºC! 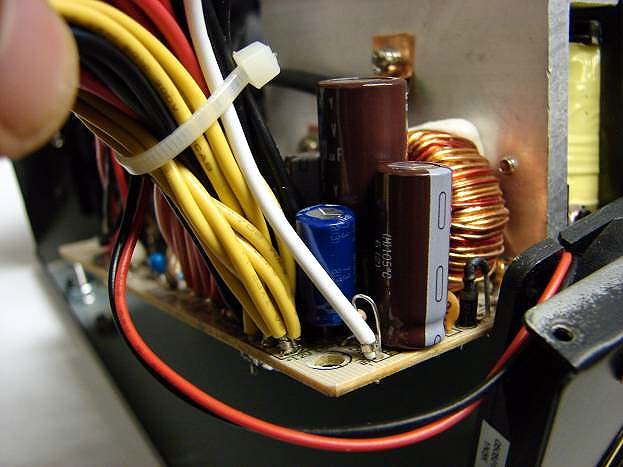 The secondary side with Chemicon capacitors – the fit was extremely tight and I had a hard time jamming in the Blue Chemicon. 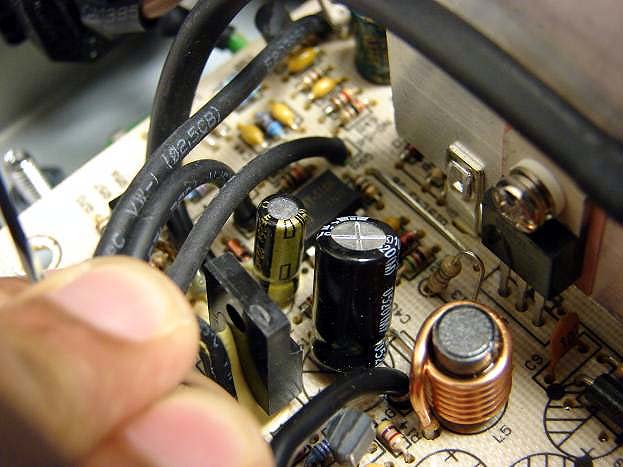 Aaha! There you go, our elusive voltage regulator. A really bad place to position an output Vreg if you ask me. Standard procedure would be to mate it to the heatsink. But it looks like CWT have considered it relatively unimportant when it comes to thermal management. It may very well be so, but I would rather have discrete semi-conductors well cooled. Again, it is right next to a Sus’con. : 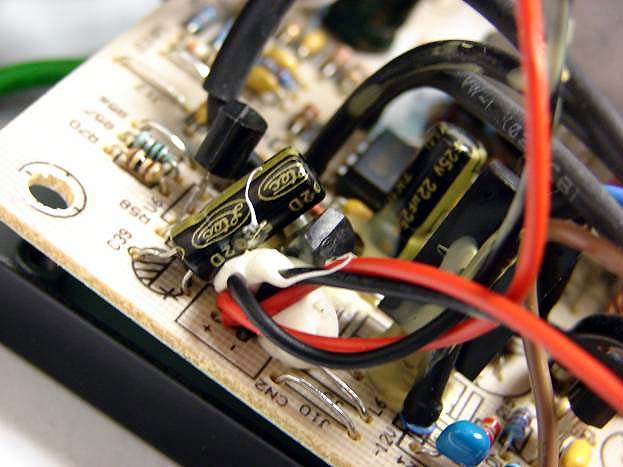 How about a poor job at affixing capacitors. Check out the Ltec. This tells me that the component is undersized. Clearly, the silkscreen has a bigger footprint than the leaning tower of Pisa. Interestingly, the silkscreen has an imprint for a D-Pak semiconductor device, but it has been replaced by the transistor/tantalum capacitor group. 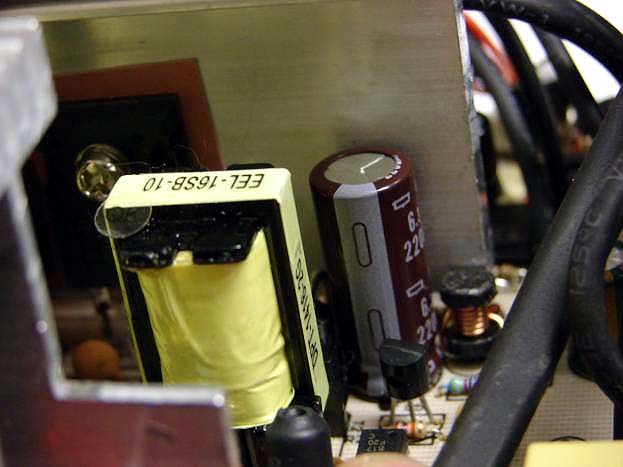 You can see the Ltec being replaced by another Chemicon. 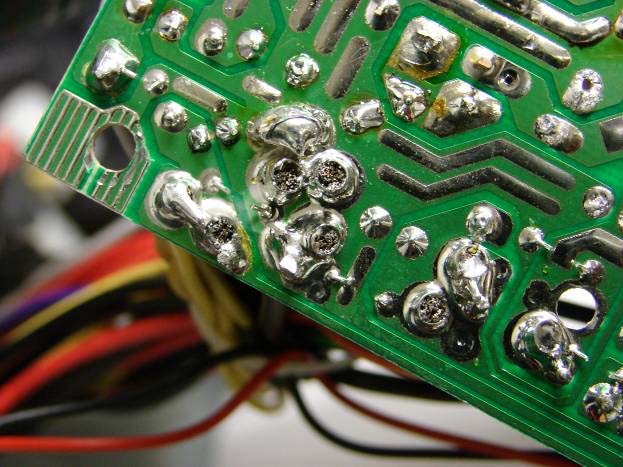 Wow, who soldered those wires? I’ve seen worse though. 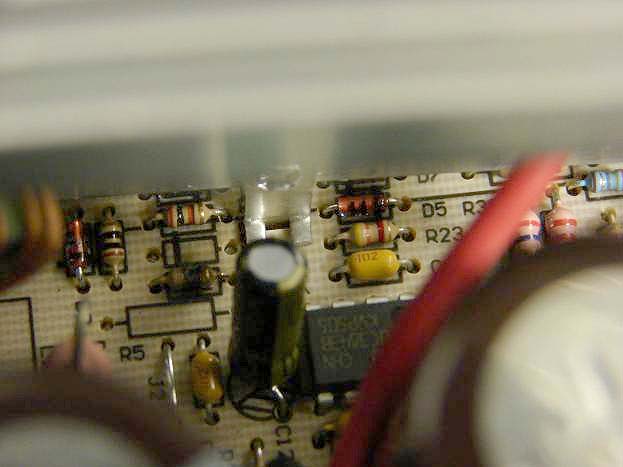 The PWM chip along with its Teapo loop filter cap.

This project is by no means finished. I’m planning on sending it to a kind friend for ATE load testing. Will this fall apart like the earlier CWT built Antec SP400 I recapped (failure was due to design issues not because of the recap)? Oh wait, did I even finish writing that one up? Hmm…now I have a project to work on while this unit is sent off for a severe stress test session. Stay tuned for Part II.

Contact the author to obtain a PDF version of this article.

No Need To Knee-Jerk

October 26: This will be the date Vista coupons ought to start becoming available for free or reduced priced upgrades. We’re not suggesting this is the best way to go, but if a Sixpack of yours absolutely, positively has to