In these days of power hungry components, the benign ATX power supply is beginning to play an increasingly important role.

The power-supply can make or break an enthusiast’s dream (and his/her wallet). What exactly would constitute an enthusiast’s PSU? I would like to set the bar as high as possible, so a typical unit should be able to handle an x1900xtx CF or a 7950 SLI setup on a Prescott based system. I chose the Prescott as it is the epitome of power inefficiency. If the PSU can power a Prescott based dual GPU system, it can easily handle the current generation of CPU’s.

To meet these demands, among other things, a single, high ampere 12V rail is recommended. JonnyGURU has an excellent introductory series of articles which go into this matter in detail – I would highly recommend everybody to read them, as he has provided the data and testing for this part of the review.

A few contenders at the time of acquiring this unit were Zippy (PSL-6600P), Silverstone (Zeus 560W) and OCZ (Powerstream 510 SLI). Zippy units would break my bank, the Silverstone had already been reviewed extensively and the OCZ would not suffice, according to several reports on the web. I decided to get this unit on the recommendation of Galvanized at Badcaps.net.

Today, we will take a look at the Supermicro-Ablecom PWS 0056, a server unit manufactured by Lite-On Inc. This unit satisfies, on paper, the requirements of an enthusiast PSU. The reason I opted for this unit should be pretty apparent, 46 A on the +12V rail. Looks very good on paper!

The unit itself looks pretty military – no fancy lights or shiny finishing – it looks rather severe. Of course, one can not expect any embellishments in a server unit. In fact, this unit does not have an ON-OFF switch! 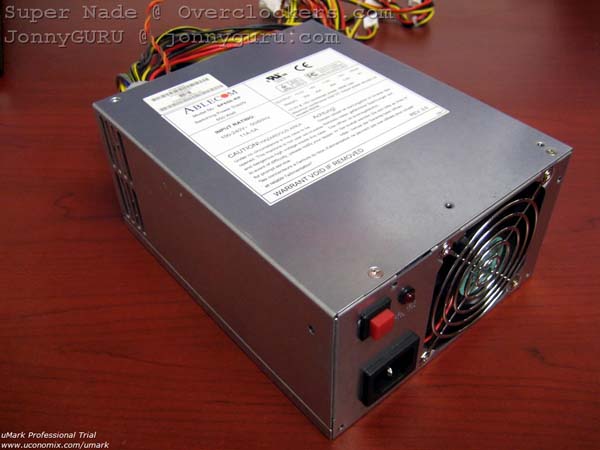 The cables have no sleeving or any accessories – typical server unit: 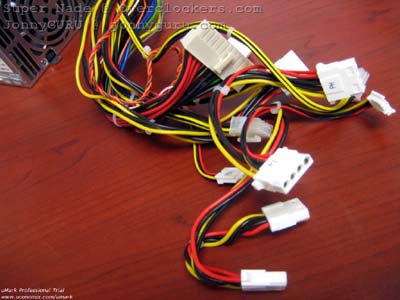 Now we come to the fun part! The primary side caps are made by United-Chemicon, a reputed manufacturer of low ESR devices. The goop in there is to damp physical vibrations. Physical vibrations (manifesting as a hum) occurs when harmonics of the line frequency are produced.

Mathematically, any waveform can be decomposed into sine and cosine waves (the basis of Fourier analysis) and since the audible range extends from 20 Hz – 20 kHz, harmonics, if produced, can be heard. You can see that the inductor is not wound properly. Usually, one avoids crossing windings. It looks to be a solid build. The green caps are Taicon. 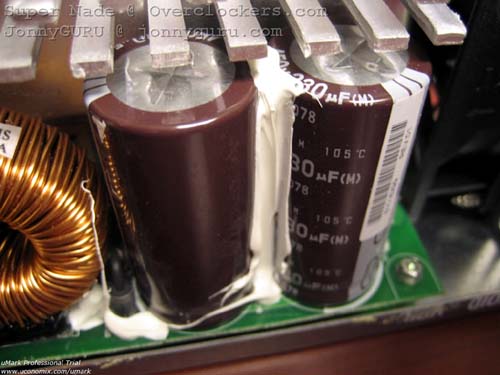 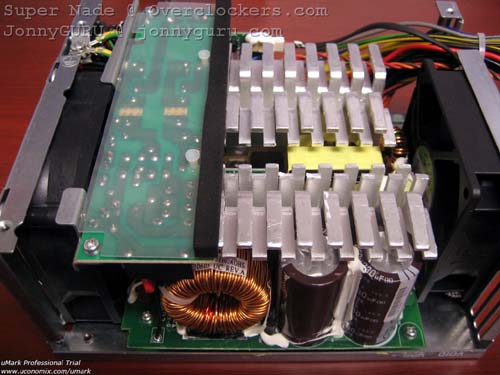 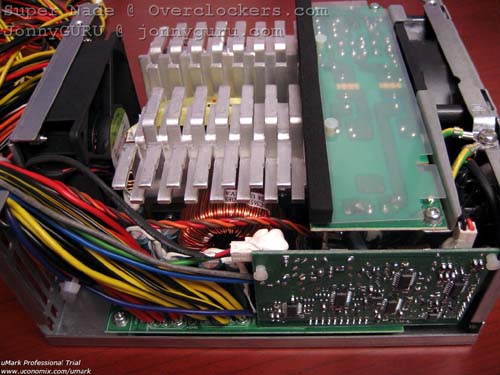 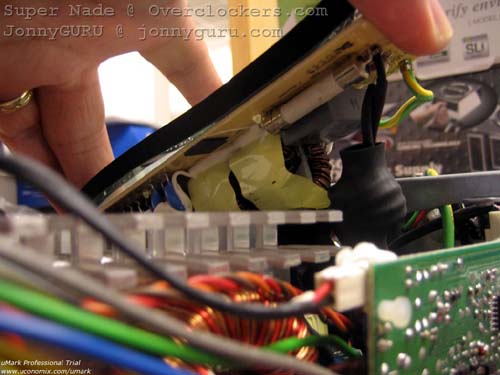 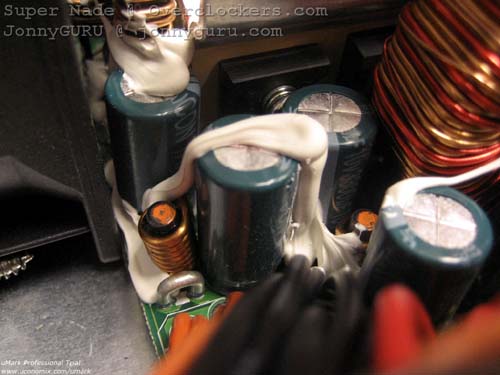 From the ATX Design Guide:

“Ripple and noise are defined as periodic or random signals over a frequency band of 10 Hz to 20 MHz. Measurements shall be made with an oscilloscope with 20 MHz bandwidth. Outputs should be bypassed at the connector with a 0.1 µF ceramic disk capacitor and a 10 µF electrolytic capacitor to simulate system loading.”

Let us see how this unit holds up to these numbers. First off, I’d like to say that this unit does not confirm completely to the ATX standard, as it has more than 18A on the 12V line.

The X axis is 2ms / div and Y axis (vertical) is 0.05 V/div, here one division corresponds to one square. Each square is further subdivided into 5 sub-units, so that makes each sub-unit 10 mV in the Y axis.

Now, let us look at the final test where all rails are almost fully loaded.

Ripple on the 12V line stays at about 60 mV while putting out 40 A! Holy cow, this is even lower than the ATX spec of 120 mV! This works out to a regulation of 0.5%. This is quite remarkable indeed! I would be more than pleased with such performance! All this is from a $136 unit!

Solely based on this data, I would say that this unit would be a superb buy. However, I would ALWAYS see how the unit performs in a real-world system before recommending it without any reservations. But so far, this unit is the champ in my stable.

This particular unit offers superb value for money. Based solely on the automated test results, I would tentatively say that this unit is all set to occupy the niche in the power-hungry SLI/CF segments. I will provide a definitive answer once I finish testing it on a real-world system.

However, there are several things which work against this or any other server class unit. Most significant among them deal with aesthetics and noise. This unit comes with no power switch, no cable sleeving, a mess of cables, and no SATA or SLI connectors. However, if you need the juice, who gives a damn about outward appearance anyway?

This will be a very short questionaire: 1) Are you willing to buy a TBred2/Barton (presume for this that the chips can generally overclock to a “real” 2.3-2.4GHz with high end air)? 2) What is the most you’ll pay for

Let’s get these AMD production figures and claims into perspective. This article has caused some discussion lately. First, let’s point out what it did and did not say. It did say AMD processors sales went up 40% in 2001 over

The good news is I ran the system at spec for a week, and had zero real or even minor real problems (it also ran fine the last few days I had it overclocked). The maybe not-so-good news is why