ED: This is an interesting idea that bears some exploration – if you can, please help Rob out on this – Joe.

As a newbie, I have been gathering all the info I can regarding cooling. However, I have become just a bit confused about all the different results posted about the same equipment.

As a scientifically minded person, I figured that there must be some kind of standard by which to judge the performance of HSF combos. It could not be a case of trial and error or I would spend a fortune in the process.
Well, I bought a Super ORB some time ago; I can hear all the comments already! You should have bought this one and that one etc.

Well, that is the problem – most of the tests that I have seen are what I would term arbitrary. One site rates the Super ORB in the top eight performers but still says that it is useless. Some users say that it is useless and others are impressed so whom do you believe?

What is a heat sink supposed to do? The whole objective is to move the heat generated by the processor from the processor to the cooling medium as quickly as possible.

For over a week, I have been battling to control the heat generated by my Duron 800 and none too successfully either. Idle was 41C and load was 48C – this despite Arctic Silver. The case temperature was fine at 22-24C. So the Super ORB is useless; I must look for another decent heat sink like a Globalwin FOP 38. That will definitely sort the problem out.

Then I came across an item on one of the forums enthusing about the attributes of WPCREDIT and how it could drop the temperatures. I had a look, downloaded the programmes and the article, had a good study and made the change. It was so remarkable that I nearly fell off my chair. (To get this article and the programmes
here’s the link 😉

Before you go and start fiddling THIS IS DANGEROUS YOU ARE PLAYING WITH THE CHIPSET DON’T JUST READ THE ARTICLE, STUDY IT!

But hang on a moment – you cannot say that. So what have I just found out by observation? Well, the tweak on 52 register has resulted in the processor not doing any work while idling and therefore not producing any heat. The amount of work I am asking the processor to do while typing this is minimal and therefore the heatsink can cope with it. This immediately gave me an idea:

If one knows that the processor is not doing any work at idle and therefore not producing any heat, then there is a way to determine the thermal efficiency of the HSF.

So the next step was to study what happened when I started [email protected] and then switched it off while monitoring the temperature. Well, when the temperature against time graph is plotted (which is all that my software (MSI PC Alert III) really does) it reveals a classical and typical graph, shown below: 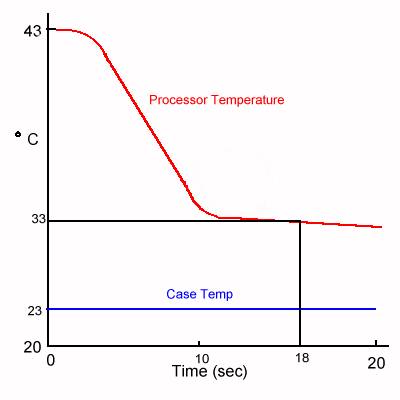 So what does this mean? Well this graph demonstrates the thermal efficiency of the heatsink.

When [email protected] is turned off, the processor is automatically put into idle mode and is therefore no longer producing any more heat. The rate at which the temperature now drops is all down to the heatsink. If the process is left, the temperature will drop back slowly to the case temperature.

To determine the thermal efficiency of the heatsink and fan, one must apply the t½ principle*.

To get what I will call the Thermal Coefficient of the HSF one must;

I am very keen to establish a database with as many results as possible.

The fundamental requirement is that your register 52 is tweaked.. To get a result, one must be sure that the processor is not producing any heat. If I get enough results, Overclockers.com will publish these for anyone to get an idea on how their HSF performs. Please email me your results, stating max load temperature, case temperature, time and your Thermal Coefficient and details of HSF, processor and motherboard.

The only reservation I have about this is that I am not sure how this will perform where the person has high case temperatures, but time will tell.

The spinoff of all this is perhaps you don’t really need that FOP38 because your ambient temperatures are fairly low.

Next I propose to work on the ideal heatsink and perhaps publish an article on that.

Hope to hear from many of you.

*Explanation for the use of t½ in the calculation.

The area that we are really interested in is the constant drop, because that represents the optimal cooling. The second curve at the bottom is the opposite to the top and effectively cancels it out. So now we have a situation where a quarter at the top that is opposite to the quarter at the bottom (=half) and a straight gradient in the middle (=half).

This is called the “half-life.”

Out of the mouth of babes…… The reaction to my article last week has been amazing! I have literally been swamped by e-mail. This thrills me. Many thought that their comments would upset me but quite the contrary; they excite me because it means that there are many out there that THINK AND QUESTION. These are qualities that allow progress and improvement in all aspects of our lives.

To the many that have taken the trouble to make comments about the article I thank you. I think that I have responded to all.

Many of the comments focussed around the same topic so I would like to put them into categories so that generally everyone has a broad view of what people thought:

This appeared to be the major problem area. I stated that the measurement of temperature and any errors associated with this process was not important because if the measurement was inaccurate, there would be a standard deviation of error. This appears not to be true. I quote from two of the e-mails sent to me;

“The ‘inaccuracy doesn’t matter’ section does apply to this comparison method, since the inaccuracy is “‘compressed'” error, not linear error. And unfortunately, certain heatsinks add to this compression since many socket-thermistors only contact part of the CPU, while some don’t contact any of the CPU ceramic layer.”

“‘temperature compression’ (or something similar) i.e. the temperature reading error of the thermistor grows with temperature, and the error increases with a law that is not linear since the error grows almost exponentially when you came near to the max temp supported by the thermistor.”

The technicalities of this process is not fully explained here, but from the e-mails that I have read, it appears that the degree of error rises with temperature.

From what has been sent to me and from what I understand, it would appear that the temperature reflected by the thermistor gives inconsistent readings and the degree of error increases in a non uniform way the higher the temperature. This would therefore make any results obtained outlined by my method invalid, because I assumed a constant where there wasn’t one.

My immediate reaction is that every user of one of these motherboards is reliant on the thermistor to ensure the safe use of the system. This is major and important device to every person that uses it and more so to users that want that little extra from the equipment.

So much work and technology has gone into improving the speed and stability of these boards and yet to me this a is major weakness in virtually every board – the inability to provide an accurate measurement of temperature.

The use of thermocouples is not new. I believe that it’s about time every manufacturer realised this and takes steps to ensure that this very vital component is accurate. Up until now, this component has been an accessory – today it’s a necessity and should be seen as such. So if you are involved in the manufacture – sit up and take note. I believe that all of us as consumers should be pressurising our suppliers for this.

Why test the HSF at resting state when we are only interested in whether it can cool the processor at peak?

This is the fundamental part of the theory that I have proposed and is very valid. All previous tests that I have seen did precisely this. A very important point was raised by another comment sent to me;

“But I think the Thermal Coefficient you find is not accurate since nothing guarantees you that your processor put out the same heat load every time you run seti.”

Do I accept that what I put forward is unworkable and will not produce acceptable results?

I believe that the base theory holds true – the only way to find out how well a HSF performs is to determine how much heat it can move while the processor is idle or as idle as we can get it in terms of what the operating system will allow.

Mikewarrior has kindly offered to run a number of controlled tests on different HSFs and thermal compounds to investigate the consistency of the method.

SUMMARY: A different approach to heatsink testing – how well does a heatsink “push the envelope”. One issue that comes up in the testing we do is how a user can replicate our test results. The short answer is you

SUMMARY: Vantec’s Flip Chip CPU cooler does a better job than the Intel OEM cooler but it’s not an Alpha killer. It is questionable whether the modest improvement justifies purchase relative to other solutions. The Card Cooler was nice enough