SUMMARY: Much ado about not much? With one notable exception.

The latest Ubuntu version was released April 24th – this is what’s called an “LTS” release, which means it will be supported for three years (five for the server product). Most of the improvements are behind the scenes which are designed to improve security and stability and as such are not that visible to the user (for a detailed list, go HERE.)

There are some new apps – Firefox 3, a disk burning utility called Brasero, and a nifty enhancement to the time/date applet:

There is also an enhanced System Monitor:

The biggest visible change is the ability to install Ubuntu 8.04 using a utility called WUBI. This allows users to load Ubuntu as a Windows program without any disk partitioning. If you don’t like it, you use Windows Add/Remove Software function and it removes Ubuntu just as you would remove any Windows program. This is about the most risk-averse way to try and run Ubuntu.

It is also a direct shot over Microsoft’s bow. Ubuntu is the most popular linux distro and with this move appears to lower the hurdle for Window’s users to give it a no-risk tryout.

After downloading the Ubuntu ISO and burning a CD, running the CD in Windows (here XP) you get this screen: 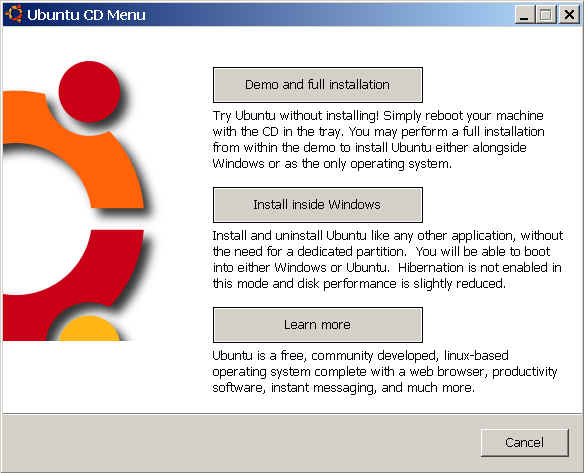 The “Install inside Windows” option leads to this screen: 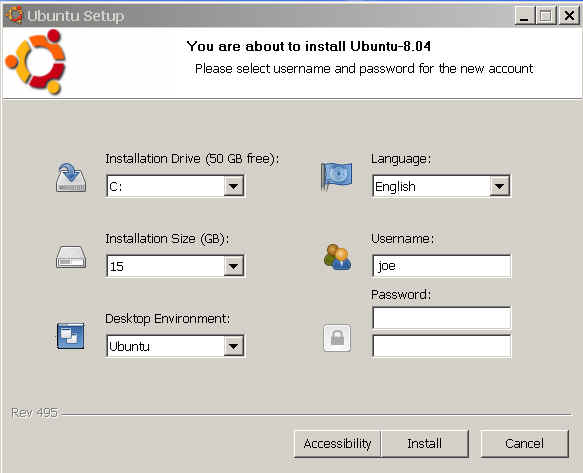 Then a typical install sequence – the whole process took about 25 minutes. 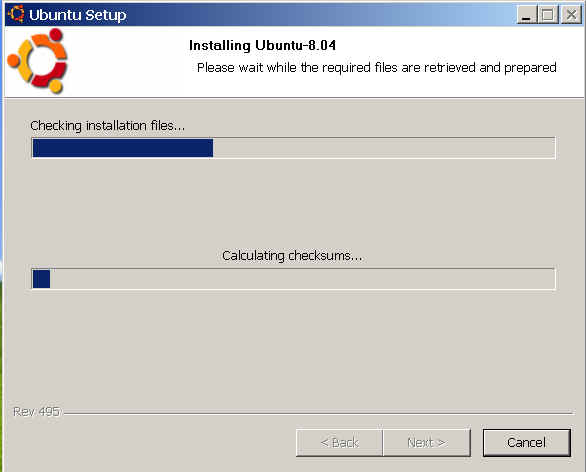 Once installed, when your reboot you get a dual-boot screen – choose either your Windows OS or Ubuntu and you’re off and running. This is not like a virtual machine – you can’t close Ubuntu and get into Windows; you have to reboot. You can see the Ubuntu file folder: 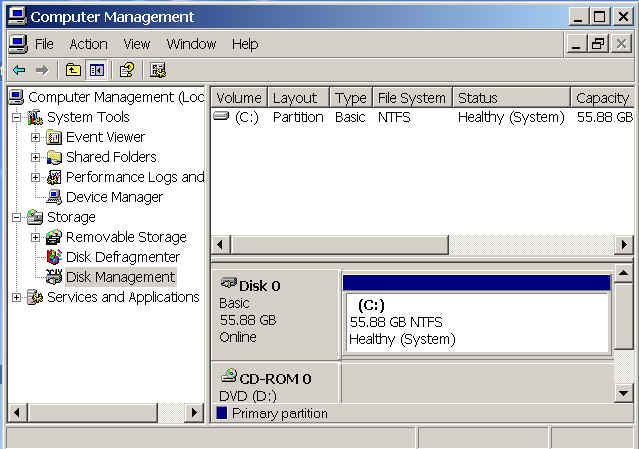 A very simple and non-threatening way to check out and use Ubuntu – nothing permanent is done to your system, such as setting up a linux partition. IMHO a very aggressive move by Ubuntu to move linux into the mainstream.

It is very easy to upgrade – a one-click operation. However, whether or not this is a good move is open to question. I upgraded and found that it crashed two programs – GIMP and the scanner utility XSane – to the extent that even deleting and reloading these programs did not solve the problem. Not good.

In addition I found that trying a fresh install on my Dell Vostro 200 was NG – this version of Ubuntu does not like this motherboard at all; I had no problem on another sytem using an ABIT motherboard and on the ASUS C90s laptop – go figure.

If you’re already happy with a prior version of Ubuntu, I’d hold off at least a month or two for a more trouble-free version. IMHO a fresh install is much preferred to an upgrade over an existing version. In addition, I would try it on a spare hard drive before committing to it. Note that there is no way (no EASY way) to roll back from an 8.04 install to a previous version.

If you’re curious about Ubuntu, this version’s risk-free Windows installer is the way to go – it’s an easy install and can be easily removed without any alteration to your hard drive.

I am disappointed that this latest version will not install on my Dell Vostro 200, and not happy at all at what the upgrade did to my Ubuntu 7.10 version. It has been my experience that each Ubuntu version has its quirks, making upgrades and fresh installs sometimes a frustrating experience. Ubuntu goes a lonq way to being a viable Windows alternative but it’s not there yet.
{mospagebreak}

I received the following email and I thought Tetge’s experience with Linux was worth a read – if anything, it attests to the strategy Ubuntu is following:

Thanks for your write up on Ubuntu 8.04 installed in Windows. I have been playing with Linux almost as long as I have been using computers. I began with computers about the same time that Windows 3.0 was released by Microsoft when my spouse of the time purchased a computer for our household. That computer was the only computer that I ever purchased, since I have built my own since then.

I have also had your site bookmarked for what seems like forever as I used to overclock vigorously back in the day. I ran a 450 Pentium at 600, for instance, for an entire year before getting the upgrade bug and moving on to a faster computer. Now I live by myself and I have three computers networked in my house, including both a wired and wireless network. They all are running Windows XP and two of them have SP3 installed, which actually seems to have perked them up. The multiple computers mainly exist to allow me to fool with networking and stuff and to allow me to experiment with Linux, since I basically always use one computer for everyday use.

In any case, my earliest attempts to use Linux always ended in failure followed by severe depression, since I have realized some success at building and configuring Windows based PCs. Early on, I realized the value of having back-ups to completely restore my system and I first used a tape drive back in the day and then when HDs became larger and more reasonably priced, PQDI or Ghost onto a second HD.

Currently I am using some version of Ghost on all my computers and my Linux experimental box has Ghost 9.0 as part of Norton System Works 2005 installed on it. When the early beta versions of 8.04 appeared, I started downloading the AMD 64 live CD and playing with 8.04 using the live feature. When the release candidate came out, I grabbed it and did an actual install to my HD. I was impressed with the slider that allowed me to choose how much HD I wanted to give to Linux and how slickly it installed and set up a dual boot with XP.

However, it made Linux the default choice in the boot loader and I was unable to successfully back the entire drive up, so I restored my saved Ghost image of XP and went back to playing with the CD live version of 8.04. However, the lack of persistence when one uses the live CD becomes frustrating as I always have to wait while the CD boots and then I have to fool with the proper screen resolution, set the time zone, log out and log back on, etc.

I found it possible to open a terminal and type “sudo apt-get install envyng-gtk” and then to run Envy to get the advanced video features of my Nvidia card; but, the system has to download all the files each time and this can take a long time too. Then, to watch a video, for instance, one has to down load the codex’s for the movie player and more time is spent. To use Open Office takes setup time as well – not the best OS overall when using the live CD.

I read your write up and decided that I would install 8.04 through XP, since the write up was thorough and it appeared that it worked pretty well. I did the install and it set it up very nicely with no fuss. I then did all the above simple but laborious tweaks for video, screen resolution and advanced Nvidia drivers and it all worked satisfactorily. I also insured that XP was still working and not hammered at all by the install.

Then, just to see, I decided to attempt to make a Ghost backup of my C: drive. I fired Ghost up under XP and it did not protest backing up the system, but it took a long, long time to create a back up image. Before installing 8.04, a complete C: backup took a bit less than 4 minutes. With Ubuntu 8.04 installed, I’d say it took more than 20 minutes for sure.

Since I wondered if the backup was complete and functional, I then restored it to the computer using my recovery disk. Again, the restore was notably slower than it had been prior to the 8.04 install, but when it was completed I had a functional C: with XP and Ubuntu 8.04, right the way they had been at backup.

This was an amazing advancement from my vantage point since one of my major beefs with Linux in a dual boot has been some kind of effective backup. Since my Linux skills are so poor, even after years of trying, I never have been able to recover from any significant system crash (almost always video related). Now I can restore images and save the entire dual boot environment.

I thought that the fact that Ghost 9.0, at least, could completely back up my system was interesting.

One notable omission that bothered about Linux was the lack of an easy disk copy utility; I use Acronis and now I think it may work in the same manner as Ghost – a BIG step forward!