VIA recently announced the creation of the world’s smallest motherboard, the VT6047 Pico-ITX. 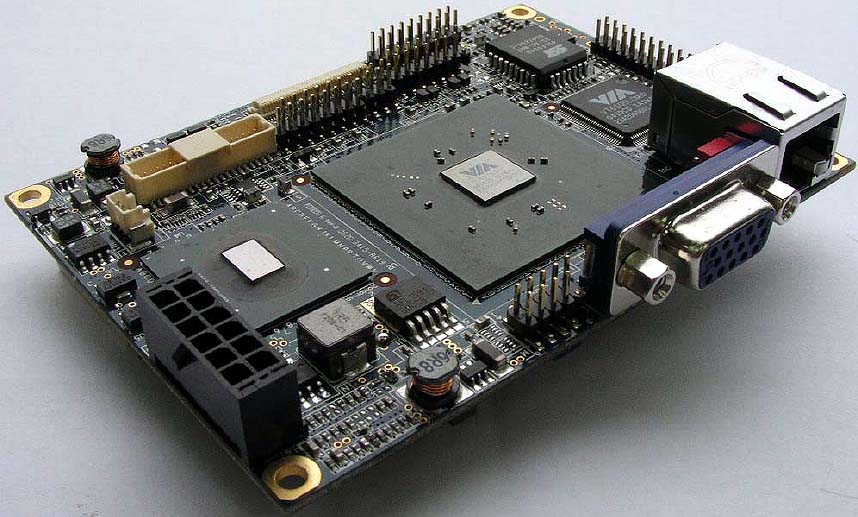 Courtesy of VIA Technologies

This board will have a 1 GHz C7 processor hard soldered into place, with up to 1 GB of memory available from 1 memory slot. This board is about the size of an Altoids tin or a deck of cards. Most of the I/O connections are handled by pin connections, which makes sense considering the small size of the unit.

For overclockers there is not much here I am sure, but in the spirit of pushing the envelope, this looks like a fun project board. Some time about three to five years ago we reached the “good enough” stage for computing. A 1 GHz machine such as the VIA design is plenty of machine for light duty work or a homemade Linux PVR. The VT6047 will likely use “Unichrome Pro II” integrated graphics to achieve a rather anemic, but certainly usable, video experience.

There is a whole world of tiny PC mods out there and even though this is still currently the playground of the hobbyist, this will change in time. I am more concerned in this article about talking about the relatively near future of the technology revolution.

Just as there were large mainframe computers long before the PC, the original spark-gap wireless telegraph was around for many years as a signaling device well before commercial radio. This went on for some period of time before voice communication was available and it was possible for the common person to listen to radio on homemade crystal sets in the 1920’s. The tinkerers that started the whole commercial radio revolution were listening to more and more stations as they came on the air.

Soon mass produced tube radios were available. Prices dropped and masses of consumers all wanted a radio without having to be an expert on the subject. Not long after that, competition from other manufacturers catered to customers that wanted style, colors and convenience. Today we have satellite radio and digital radio stations serving up more and more information. You can get a radio in toys and integrated into almost anything that will benefit from an audio signal.

In the information revolution we have moved on from the early days of building personal computers at home, such as the Altair. Mass production followed with beige boxes, IBM compatibles and Compaq. Although Apple was an early entry into the field, Apple became known as a company that offers style and ease of use in computing. The Internet greatly increased the usefulness and worth of personal computers by allowing for a free flow of information from almost anywhere.

Computers and the Future?

As in commercial radio, computers are already in the process of becoming commodities. Unlike the hobbyist and the tweaker, most people just want to have the benefits of a computer without the complexity. Even intelligent and knowledgeable people may not want to spend their day babysitting and nursing a machine. We can look for more drop-dead easy machines that will fade away into the background of life as they become more and more common.

Instead of a special desk and even a “computer room” in the home, we will likely have small, thin machines that take up about as much space as a notepad. These will likely be slightly larger than current palm PCs with WiFi and enough capability to be useful. The cheap versions will have tiny keyboards, while the more expensive models may have virtual keyboards that project a typable keyboard layout onto your desk, or they might be voice activated.

The cheaper PCs will use video that can be transmitted to any screen in any room that you happen to be in, while the expensive machines might project a full screen onto a wall. The smaller, less capable machines will be able to connect to bigger machines wherever they go to improve their capability as needed. The OS will differ according to the needs of the machine.

Instead of a “one size fits all” machine, we will have many smaller ones that take on the duties of each task.
Imagine a more full-sized specialized “Windows Finance” machine for household finances and banking, and a “Windows Student” portable machine for the kids. Palm PCs are now integrated into our cell phones and as they increase in capability, they will be more useful. We already see this splitting up of the OS starting to happen with the Windows Media Edition and all that entails. That is just a beginning – with tiny motherboards showing serious capabilities, this hardware and OS breakup scenario is very close to reality.

As machines keep getting smaller, the OS will break up into smaller parts. Add nearly universal Internet access and some decent security and there is really no reason to continue have our data split up as it is among all of our devices. Why not have all of our data available on the Internet all the time? It would take some fairly large security and privacy updates at the very core of the Internet, but it should be possible to do this. Our desktop experience could be the same wherever we go, and all of the data could just as easily follow. PC, Cell, Laptop and Palm PC could all just share the data with each other instead of artificially forcing us to jump through hoops to make all this stuff interact together.

With that freedom, even the OS would not truly matter. Full transparent access to our data and ease of use is all that is important to us. The way we use computers today reminds me of the way my grandfather used to view a tape recorder. I had a class assignment to record his memories of his childhood. He had no problem if I wrote it out on a piece of paper, but he did not like that tape recorder. He knew that it was not magic, but he did not like to be taped. He was awkward around the technology. We do not trust our present technology to safeguard our privacy or our data, either. The younger generation will become more trusting and much will change when they do.

If we could really, truly, trust our data to be safe on the Internet, how much data do we have that is unique? Most of us listen to a rather finite list of music, watch most of the same movies, and use a relatively small list of the same sort of programs. Outside of the pictures of our kids and a few document files, we are mostly storing the same stuff on our machines in much the same way.

The music companies, entertainment industry and software manufacturers will all have to get on board, but that is eventually going to happen. The wild west scenario of anything goes on the Internet will continue to fade away to be replaced by law and order when we elect some people that are now twenty-somethings who are not clueless about what is going on out there. Some sane, relevant laws that do not trample on our rights and still protect content are sure to eventually come about given enough time. If there was a way to prove we were licensed to use a certain program and authorized to listen to a certain file and watch a certain movie, why do we need all those millions of copies of the same data over and over again stored in millions of machines?

If programming was web-based, like Ajax, then we could have the same data all safe and sound anywhere we go. We could save our core data in a flash disk or just store it on line and go anywhere in the world and know our desktop and our data is available and secure. Look for the younger generations to push this to the limit. Eventually backups will be obsolete as we rely more and more on the infrastructure of data companies to do this chore for us.

How much of this will happen is still anyone’s guess, but I am betting on the unique ability of humanity to find the easiest way possible to do something and capitalize on it.

AMD Says Barcelona Will Be 40% Faster One of the server execs at AMD recently made the following statement: “We expect across a wide variety of workloads for Barcelona to outperform Clovertown by 40 percent.” Note the careful and very Read More

There’s been a great deal of concern that AMD’s chips won’t be too terribly fast in 2007, mostly because AMD has said so so far. Well, there’s some reason for optimism on this front. IBM will announce in February that Read More