It has been my policy not to review items that companies did not send for review. In the case of the Akasa InterConnect EX, I am violating that policy. I bought this unit retail, and I was so impressed with it I had to share. When we are done with this review, you will see why.

The Akasa InterConnect EX is a front panel card reader. It fits in a 5.25” slot in the same place where you put your optical disk drive (ODD). You find memory cards storing the pictures in your camera. They are also useful to expand the storage capacity of inexpensive laptops and tablets. You can transfer the files to your desktop computer with a cable, by wireless, or with a card reader. 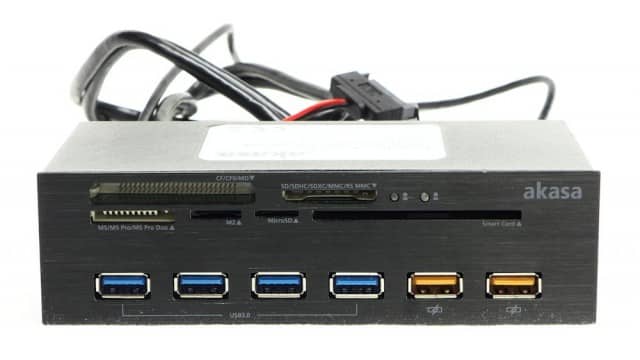 Now, external card readers are easy to get, and cheap. Just plug one into a USB port, and you’re ready. When you take pictures, it is far quicker to pop out your memory card and upload your pictures directly to your computer, than to slowly feed the pictures through the cable that came with your camera. Wireless is also pretty slow. And if you shoot RAW (RAW files are large), you are in for a bit of a wait. But that’s pretty clumsy. You may have a fast card reader you plug into a USB3 port. You may have one that sits on a USB3 cable. It’s a kludge, though. So I went looking for a fixed card reader. There are plenty of those; often you see many sellers offering the same units, but with their brand name on it. The card readers are mixed in together with USB ports and fan controllers. But the worst problem is that most fixed memory card readers are USB2. Whether they fit in 3.5” slots or 5.25” slots, fixed card readers tend to be USB2 devices, even when there are USB3 ports on the device.

Here is the first place where the Akasa InterConnect EX stands out – its memory card reader is USB3. The second standout feature is that it has four USB3 ports. That means you can load it up with USB2 devices like wireless keyboards and mice and still have ports for your USB3 flash drive. Nice touch, that. Finally, the Akasa InterConnect EX features two USB charging ports. These yellow ports do not transmit data, but up to 2.4 Amps of current. You can rapidly charge your smartphone or other wireless device at the same time it updates itself wirelessly. This is a feature you won’t really appreciate until you use it. Then you will wonder what you did before you had it.

The Akasa InterConnect EX also has a Smart Card reader. What it does not have is a fan controller. It is a pure communications accessory. 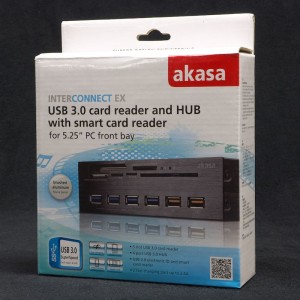 From the product page

The AK-HC-07BK is a simple metal box that fits into an available 5.25” bay. From the back of the metal box you will find male and female “Molex” connectors, a SATA power connector, a USB3 20-pin plug, and a single USB2 plug. And that’s it. For accessories you get four little screws to hold the device in place.

I was planning to move my system to a new case. I had been using a Cooler Master N600, which not only has front-mounted USB2 and USB3 ports, but it also has front-mounted headphone and microphone jacks. I was planning to move the system to a Fractal Design Define R5 case, which has its IO ports on top. That would put them under the shelf, and make them inaccessible. I bought the Akasa InterConnect EX to put the IO ports out front along with making the card reader integral to the system – no more external card reader on a cable. But I needed a way to use my headphones.

I found that you can buy USB headphone adapters. You can use these to bypass a dead sound card, or provide yourself with good quality sound if your computer produces not-so-good sound. In this case, were going to substitute for audio jacks.

Buyer reviews suggested that one kind of adapter accepts a mono microphone, and another accepts stereo. These are stereo microphone and headphone plugs. Note that they have three bands of metal. If you have two, you have a monaural plug.

I tested them both. The adapter on the left allowed a stereo mic to plug in, but it did not transmit sound from it. The adapter on the right accepted a stereo plug just fine. However, this does not prevent both adapters from producing adequate sounds. Since my main headphones do not include a microphone, I can use either one to listen to music, trailers, or any other audio or audio-visual productions without disturbing the other people in the room.

Before I put the Akasa InterConnect EX in my main system, I tried it on an open air test system. I discovered that the Molex and the SATA powered the yellow USB ports. Either one will do the job. I connected the blue USB3 plug and left the USB2 unconnected. Windows saw the slot readers and USB3 ports, and declared them to be genuine USB3. One of my “USB3” external card readers is actually USB 2.3, so I was making sure. The other thing I was making sure about was that the card reader worked while the USB2 was unplugged. It did.

I tested a Compact Flash unit, a Sony memory stick, and an SDHC card in the card readers – simultaneously. They all worked. It turns out that the USB2 plug is for the Smart Card reader. The only smart card I have is my main credit card. No way that goes in a slot, so that went untested.

The one aspect of this card reader that got me excited was the charging ports. They charge my wireless devices quickly. Once you have used one of these, the convenience becomes a must-have feature in your future. Forgive the pun, but it’s true.

The card reader went into its slot just like any other 5.25” device. It allowed me to install a case that otherwise would never have fit under a shelf.

The Akasa InterConnect EX is a great convenience, and with an adapter, it allows you to put a case with top-mounted IO under a shelf. This device gives you a permanently mounted card reader. If you have to take your computer out to clean the insides (a necessity in a dusty environment), it is one less hassle you must attend to. Further, you get charging ports that will deliver up to 2.4 Amps to your USB device for fast charging.

On the other hand, at $48, the Akasa InterConnect EX is a relatively expensive device, especially if you must buy an $8 headphone/mic adapter to go with it. It would be a far better buy if Akasa included mic and headphone jacks on the front plate.

I have two questions.
Are the Sata and Molex power connections just an option for the user or using both can be beneficial when using both usb powered ports?
Is the usb 2.0 an optional port for those who don't have the usb 3.0 on the Motherboard or both plugged togheter allows higher thruput under stressed conditions? Ex: when all ports been used at its max speeds.
thanks!

I have two questions.
Are the Sata and Molex power connections just an option for the user or using both can be beneficial when using both usb powered ports?
Is the usb 2.0 an optional port for those who don't have the usb 3.0 on the Motherboard or both plugged togheter allows higher thruput under stressed conditions? Ex: when all ports been used at its max speeds.
thanks!

There are four USB3, and connect through USB3 plugs, incompatible with a USB2-only board. To connect the Akasa you must use one of these, and plug the ends into a USB3 card that plugs into a PCIe slot.

The other two USB ports - 2 of them -- are power only, with 12V supplied by the Molex connector. I can tell you about all this because I use the device in my own machine, mainly for its card reader.