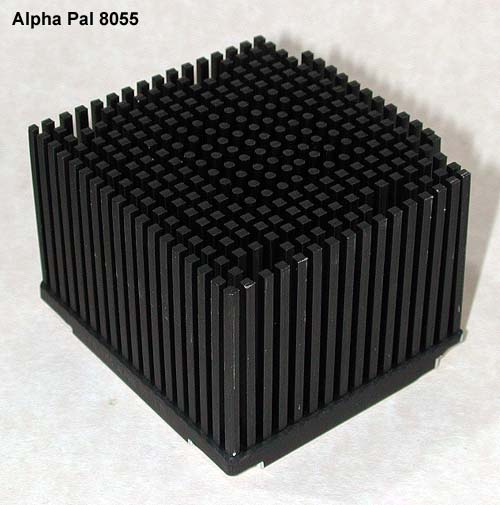 The good guys at The Heatsink Factory were nice enough to send an Alpha 8055 Socket A heatsink for a test spin. In contrast to earlier versions, the 8055 does not require mounting through the socket’s four holes on the motherboard. Instead, it mounts to a bracket 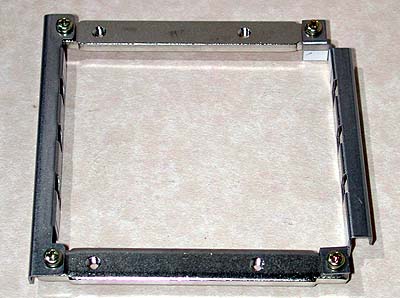 which must be assembled. This bracket fits over the socket and engages all three of the socket’s lugs very secure.Alpha states that “The new base shape accommodates the entire AMD keep-out area.” This means that the 8055 should fit any Socket A motherboard, assuming the board meets AMD’s specs. There is also a kit which does allow mounting on the socket’s holes as an extra cost option.

The Alpha features a shroud 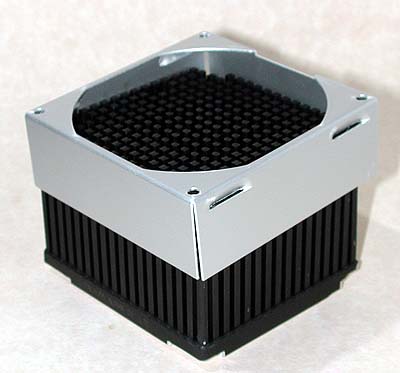 which serves to channel air through the heatsink’s fins. Note that the fan blows OUT – while it may be tempting to mount the fan blowing air into the heatsink, stick with Alpha’s design – performance will not improve and may be worse with it blowing into the base.

For those the averse to assembling things, the Alpha may not be your cup of tea. There are numerous parts that ship with the Alpha: 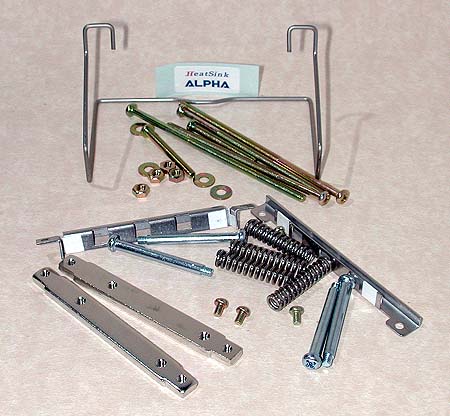 The Alpha ships with instructions, which I advise purchasers to read, re-read and follow closely.

The base is typical Alpha – well finished: 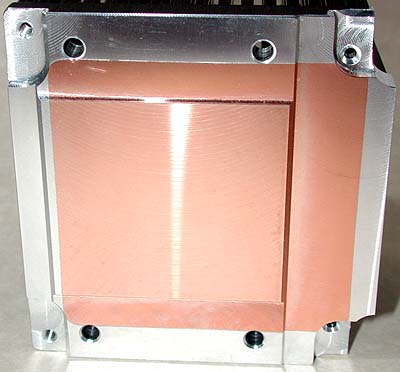 The Alpha was tested on the CPU Die Simulator which gives results that are unaffected by motherboard influences. The Alpha does not ship with a fan. For testing, I used a 80 x 25 mm fan and varied rpms to give purchasers an idea of probable performance with different fans. Note that as shipped, the Alpha can not use a fan larger than 25 mm – high performance 38 mm fans are not an option, although enterprising users might find appropriate bolts to mount such a beast on the Alpha (I believe they are metric threads).

Alpha’s 8055 is a fine choice for Socket A cooling, although performance is entirely dependent upon which fan is used with it. Higher rpm fans will deliver better performance at higher noise levels – as always. While it is impossible to test every fan, users should expect fans at similar rpm levels to closely match results shown above; interpolating for different rpms will give a good approximation of expected performance.

¹Note that manufacturers measure fan noise usually 3 feet from the fan; I measure noise 8″ from the fan’s intake.

A couple of adequate performers in the bunch. — Joe