Hot on the heels of their graphics card launches, AMD is announcing a new bundle for the upcoming holiday season. Starting today (11/13), when you buy any R9 series graphics card, you will receive a free copy of Battlefield 4. 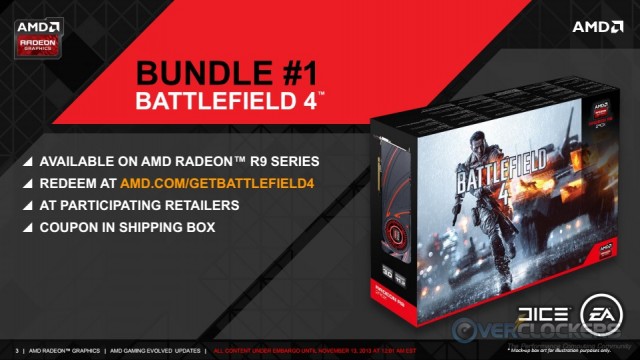 They do caution that you should check availability before assuming it will work, which you can do here: http://www.amd.com/battlefield4 . 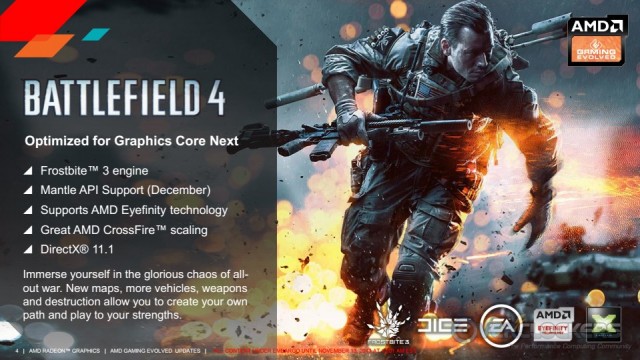 Battlefield 4 is a powerful title for AMD Radeon customers, because AMD and DICE collaborated quite closely over many months to optimize the code of that game for peak performance on Graphics Core Next. Further, the December patch to implement the Mantle API will deliver the unprecedented ability for the Frostbite 3 engine in Battlefield 4 to go close-to-metal for substantially improved performance. This is a first for the contemporary era of graphics, and it’s being ushered in by AMD at the direct request of game developers like DICE. The benefit to all of these development efforts is so significant that the architect behind Frostbite 3, Johan himself, will tell you that Radeon is the best GPU for the job with BF4 and any other Frostbite 3 title.

AMD is also extending the Never Settle Forever to their lower-end R7 260X. 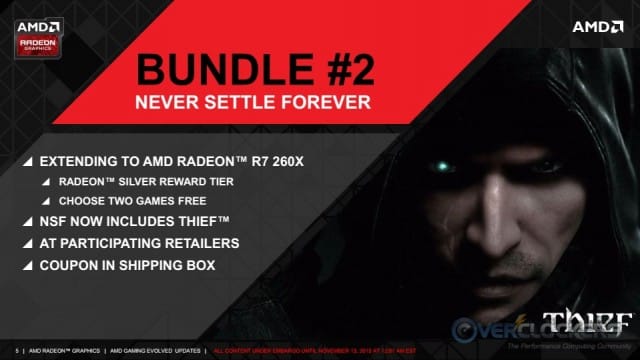 Next, we’re extending the Never Settle Forever bundle to the AMD Radeon R7 260X! This product will join the Radeon Rewards Silver tier, meaning the user can choose from two games free. Gamers will have to purchase from a participating retailer, of course, but that’s still just as easy as it’s always been: check availability at www.amd.com/neversettleforever. And the games they can choose from include: Hitman Absolution, Sleeping Dogs, Sniper Elite V2, Far Cry 3 Blood Dragon or DiRT 3… and one more! 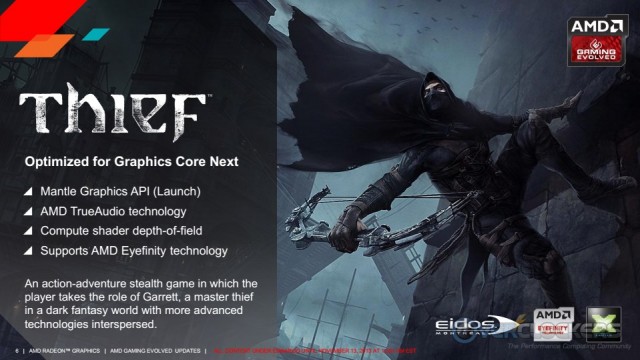 THIEF is joining the Never Settle Forever program in the silver tier to coincide with the R7 260X’s introduction to the program! This is a great opportunity for R7 260X customers to get prepared with a game that leverages the most impressive features we’ve enabled in that product: AMD TrueAudio, Mantle, and more. That’s right, gamers can utilize whatever sound hardware they already have to get an incredible acoustic experience, and they’ll also get unmatched performance by firing up a Mantle-enabled game.

To sum up – any R9 series card comes with Battlefield 4 and the R7 260X has been added to the Never Settle Forever bundle. 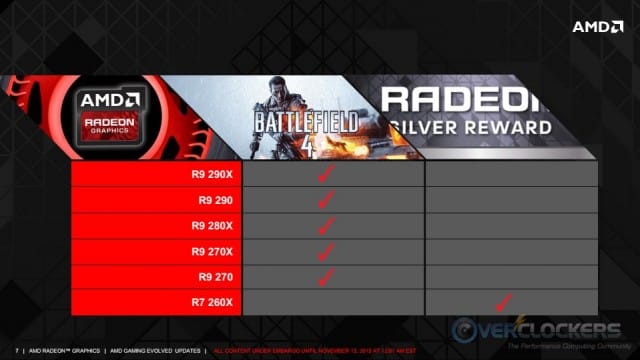 Well, it looks like AMD fans have some games to look forward to if they buy into the new series this holiday season. Happy gaming!