AMD has been working hard on their drivers over the past couple of generations and came up with names for the initiatives. From 2016, we saw the Crimson Edition with the 2017 version a slight tweak to Crimson ReLive Edition. In 2018 the major software update was labeled Adrenalin Edition and for 2019 it is simply Adrenalin 2019 Edition. The point of these larger updates is the culmination of end-user input focusing on performance and stability of the driver and its ecosystem. In fact, AMD stated that seven out of the top ten suggestions were implemented this time around. The hope is that by prioritizing development through community feedback, there is better overall user satisfaction.

To that end, AMD has targeted both the enthusiast crowd as well as the average Joe who may not tweak their systems as much. Features were added and updated for gamers, enthusiasts, and creators with updates to ReLive, Project ReSX, the Radeon Advisors and Installer, Wattman, Radeon Chill, Radeon Display Technologies, AMD Link, VR Streaming, new features such as in-game replay, and more.

On the gaming side of things, AMD/Radeon Software Group (RSG) has centered improvements around performance to which they are “focused on delivering the best gaming experience with app and driver improvements”. To that end, AMD has up to 15% average performance gains from 17.12.1 to 19.12.2 drivers in major titles such as Battlefield 5, Assassin’s Creed Odyssey, F1 2018, Shadow of the Tomb Raider, and more. Granted, many of these games weren’t released at the time, so day 0 drivers compared to day 1 typically show the most significant improvements and may skew that average. Regardless, performance increases are always welcome. 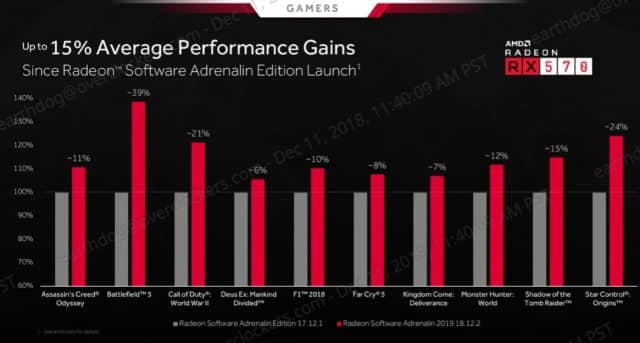 Next up for gamers is AMD’s commitment to optimizing popular eSports titles in order to improve FPS performance, 99th percentile frame times, as well as click-to-response timing, all critical elements for a competitive gamer. Performance improvements in Fortnite, DOTA2, and Player Unknown’s Battlegrounds (PUBG) were seen with increases in FPS as well as frametime improvements. Click to response saw notable gains in Fortnite, PUBG, and Overwatch which are all gaining in popularity on the eSports front. 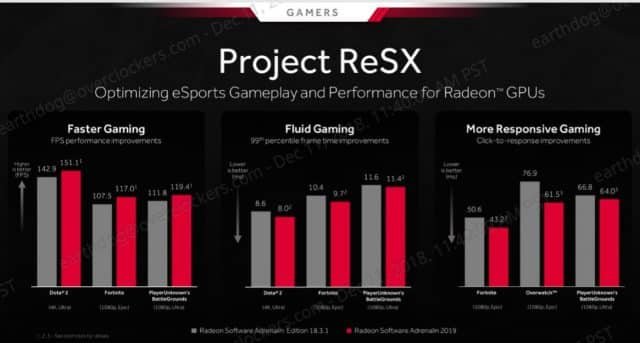 Radeon Advisors are targeted at users who may not be as fluent in PC gaming. It was described as almost taking them by the hand and suggests tweaks to the game for optimal performance.

The Game Advisor does just as its name implies and tweaks/tunes games on the system. It will come in Radeon Overlay, and after hitting the “start monitoring” button, it will measure the performance of the game at its current settings and output a report at the end. Based on this information, Gaming Advisor will make recommendations for tweaks. If the performance is low, it will suggest lower settings to improve FPS. If performance is high it will suggest items to turn up to improve visual quality.

The Radeon Settings Advisor takes that to a system level and tailors hardware settings for FreeSync/enhanced sync, Radeon Chill, and additional refresh rate adjustments. It is designed for users who are not familiar with using Radeon Settings.

The last advisor, Upgrade Advisor, is a simple tool that tells users how well they can expect their system to run their games. The interface has been updated to more clearly display compatibility with access to in-game explorer and upgrade advisor tabs. 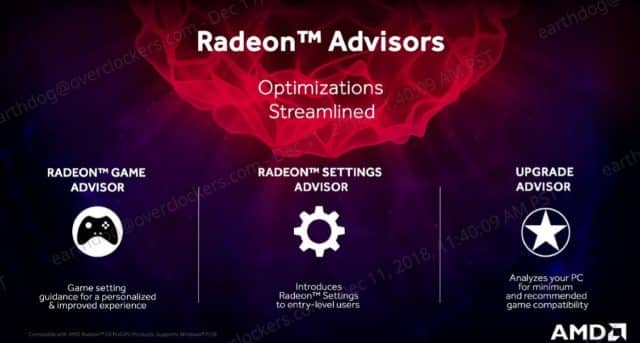 The enthusiast crowd features are intended for those who tend to know a bit more than the average bear when it comes to tweaking system and game settings, among other things. With that, AMD wanted to be sure focus was on this group as well.

AMD’s Wattman software has been a staple in their ecosystem for a couple of years now and is designed to be able to tweak performance and power optimizations. In the latest edition of Wattman, a one-click tuning function was added which is said to improve performance with auto-GPU and memory overclocking as well as improve GPU efficiency with auto GPU undervolting. That’s right folks, auto UNDERvolting. AMD has improved user control by adding the ability to change fan speeds with temperature dependent fan curves as well as zero RPM fan control. It also targets optimization of memory-bound applications with memory tuning which allows users to adjust preset memory timings. This can help in with mining/blockchain among other things. For the Vega-based cards, users can adjust the VPM states as well as the engine/core clocks for each state allowing for more granular control of the overclock. 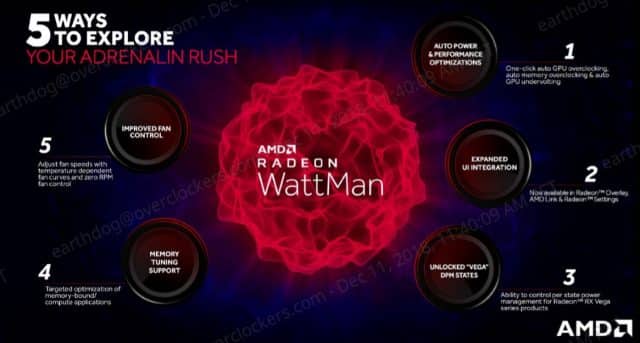 The Radeon Chill feature was upgraded as well to allow up to 20% more power savings in select titles by tweaking the algorithm. The Chill feature monitors inputs and mouse movement and lowers FPS when it isn’t needed. 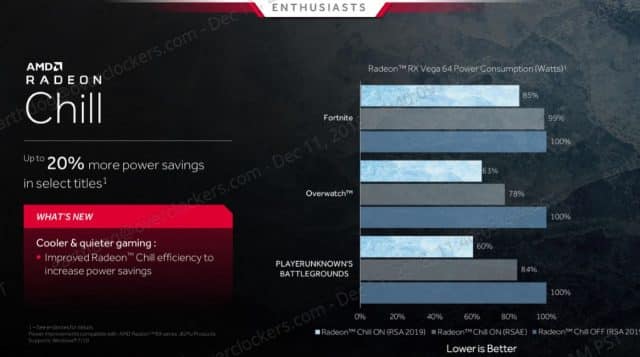 AMD has also stated they made improvements to FreeSync 2 HDR and by introducing auto tone mapping. Since all monitors are different as far as translating brightness ranges for example, the software auto tones to FreeSync capable displays to get the appropriate GPU based tone mapping in place.

AMD’s Virtual Super Resolution will let a game run at a higher resolution than the display allows and will downsample it to the output (more or less full-screen supersampling). Additional support for ultra-wide displays, the #2 requested feature, was also included.

Improvements were also made to Radeon Overlay including improved in-game display controls, as well as improved flexibility with per-game color controls allowing the user to set up their own color profiles per game and prevents loading and unloading for each title. Wattman controls are now adjustable in the overlay feature. This can be helpful to overclockers in particular by not having to alt-tab out of a game to tweak the settings. Tweaks to the performance metrics were also included, such as lowering the sample rating (#9 requested item) and frametime logging controls (#10). They were also able to get the #1 user requested feature which was being able to customize the overlay including its color, size, transparency, number of columns, location on screen, and more. 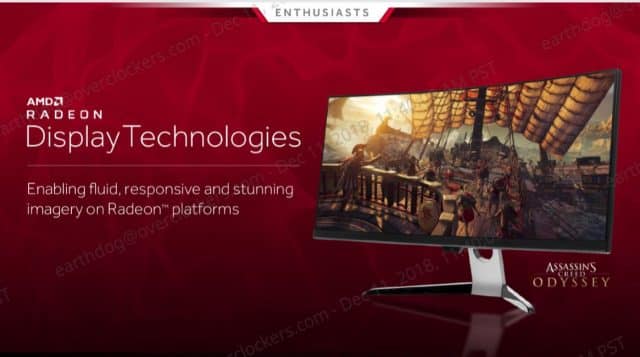 AMD Link is a mobile application that offers a second screen while gaming designed to control Radeon graphics (available at app store and play store). AMD said they have improved reliability for a more stable connection as well as a more ergonomic connection process in the first place. Users are also able to upgrade Radeon Software through the phone or tablet. They have even added the ability for voice control through the device. Functions like start/stop streaming/recording, screenshots, saving instant replays, and monitoring information such as GPU temperatures/clocks, memory clocks, fan speed, and frame rates. Wattman functionality, as well as performance metrics, can also be managed through the handheld device. 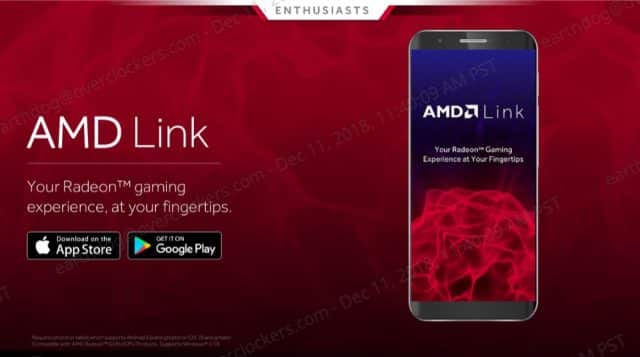 For the creators, AMD has made tweaks to ReLive and ReLive streaming with In-Game replay abilities, an integrated scene editor, as well a GIF support.

The In-game Replay ability seems pretty cool and appears to almost work like a short-term DVR in that it can let users have a PIP video playback of what just happened on screen. It can be useful for games without a death cam or streamers who can replay in real-time.

The Scene Editor will be useful for streamers and allows for transitions via a hotkey. It also includes browser banner support and other features useful for content creators and streaming.

GIF support has now been added which will let users create a 5-30 second video to make a quick GIF and allow it to easily share to multiple social media outlets. 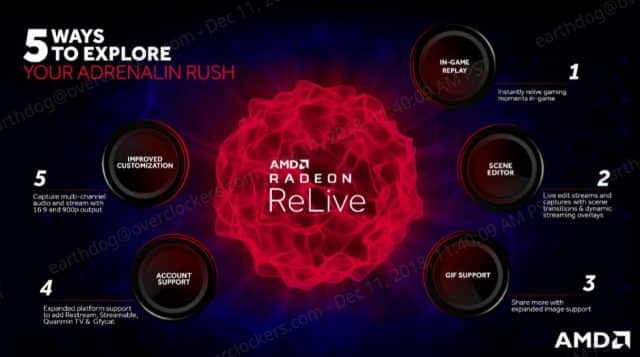 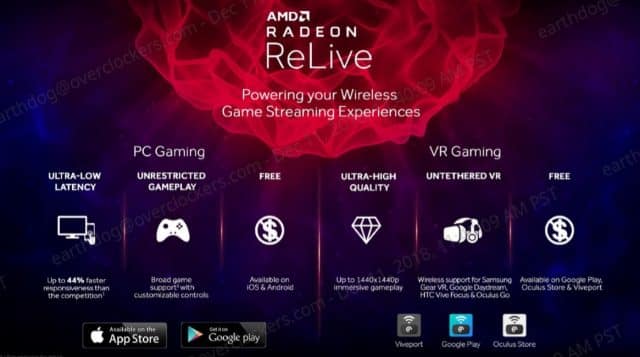 Overall, it seems AMD is making its best efforts to bring more performance, stability, and functionality to its software/driver ecosystem by implementing a lot of new features and at the behest of users who are requesting such things. If an AMD graphics card happens to be in your system, the functionality and options it brings really appear to be a step ahead of the competition. While performance improvements are made on both sides, we do not see this level of integration on the other side of the fence. Keep up the good work, AMD RSG!

Thanks to XFX, we have the MERC 310 BLACK RX 7900 XT on the test bench today. This is our first GPU from AMD’s RDNA3 line of cards. The RX 7900 XT is based on the NAVI 31 die. According to AMD, their new design delivers nearly 1.5x the performance per watt.

Today, AMD has released its latest Threadripper CPU, dubbed Threadripper 2, with a monster 32 core 64 thread 2990WX and the 16 core 2950WX. The new parts are based off the Zen+ architecture and continue AMD’s onslaught of additional cores trumping similar processors from Intel by price and number of cores and threads.

Pretty cool stuff, AMD has always been pretty good about updating drivers to optimize for new games, glad to see they are keeping it up. Maybe if they keep it up and give me a reason to switch back i might lol. Also good job on the article Joe!

Really great to see AMD doing this. I never seem to see NVIDIA making that sort of headway, but perhaps it's just not as widely published?