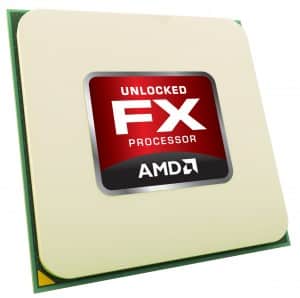 The rumors have been going around the web for some time now, but today AMD officially unveiled two new FX-series processors with clocks up to 5.0 Ghz out of the box. The new parts are based on the ubiquitous Piledriver x86 cores powering the latest generation of FX processors “Vishera” as well as FM2 socket A-Series APUs, and will be referred to as FX 9000-series CPUs. So far, two SKUs are planned to be released; the top dog being FX-9590 with eight cores running at a 5 GHz Max Turbo clock, followed by FX-9370 with a 4.7 GHz Max Turbo. AMD does not state at this time what the base clocks will be. The two new processors will come with unlocked multiplier for easy overclocking, as with all FX-Series models.

The parts will first be made available to system integrators and there is no word on when, or if, they will reach the retail market. Furthermore, and although AMD did not detail the power aspect of these new parts, rumors are they will come with a TDP of more than 200 W.

Editor’s note: We haven’t been able to confirm with AMD, but the current word around the rumor mill is that these may not even make it to channel and will be limited to boutique PC builders only. -hokie

The much-anticipated launch of Intel’s 12-Gen Alder Lake-S CPU has sparked several rumors and much speculation. The latest is that MSI may have inadvertently announced the actual launch date before Intel’s Embargo is lifted.

Graphics Core Next is here. Come with us on a journey to see how AMD’s new HD 7970 stacks up against the competition.

What the heck is the point of that?

Heh, a lot of what AMD is doing these days seems to be more "hey, we're still here!" than anything else. Other than continuing to push the APU side, they don't have a new architecture ready on either the CPU or the GPU side and can't come up with anything new until they're finished. Without that, there's only so much you can do to stay in the public eye. I expect good things from them, especially on the GPU side when the time comes, but until then we'll unfortunately keep seeing stuff like this (for instance the "new" HD 7990 that had been out for months already).

I've got to hand it to them though, it's all just relevant enough to be worth posting about. :)

Wow. If AMD wants to bother putting the effort into making this thing and then doesn't even make it available, that's failing on a whole new level.

If this is all hype over a CPU I can't even buy, it's hardly worth talking about and is one sad publicity stunt.

Heh, a lot of what AMD is doing these days seems to be more "hey, we're still here!" than anything else.

Totally agree, which is odd and really is sort of unnecessary on their part when talking about this target market. The enthusiasts buying AMD still like me already get that we aren't trying to compete with Intel. AMD has been embraced the same way Lotus is in car circles- it's not about the raw performance numbers, it's enjoying a slightly quirky set of traits. This sort of thing just reminds everyone that they want to compete but aren't.

I'd rather see a CPU that runs a base of 5GHz out of the box instead of just boosting to 5GHz, still neat I guess.

I'd rather see a CPU that runs a base of 5GHz out of the box instead of just boosting to 5GHz, still neat I guess.