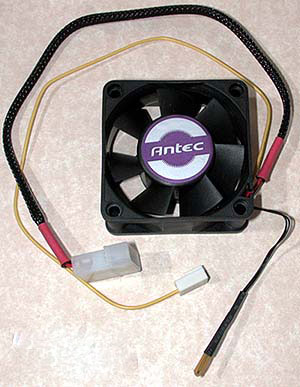 Antec was nice enough to send a sample of their Antec SmartCool – these come in 60, 80, 92 and 120 mm sizes. As noise becomes more and more an issue with CPU cooling requirements, temperature controlled fans are emerging as one possible solution. I have the 60mm version and decided to test it for CPU cooling.

Antec’s SmartCool features a sensor on a 150mm long wire attached to the fan: 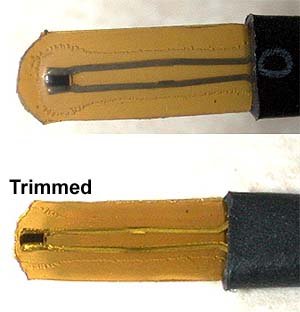 I trimmed the sensor tip to allow closer contact between the sensor and CPU core.

The sensor can be slipped under a heatsink to control rpms based on CPU heat output. It uses a four pin plug with a separate tach wire, so overloading a motherboard’s fan header is not a problem. Antec does not recommend that the sensor touch the CPU core because it might “burn the protective coating”. I ignored this warning and, after testing with the sensor touching the core, did not find any burning.

Based on specs, the fan looks like an interesting approach to CPU cooling. Compared to fans that use a sensor in the fan hub, a sensor contacting to the CPU core is a much better approach. For example, if you were to duct air into a fan, air temps would not bear any relationship to CPU temps – a fatal disconnect.

I decided to mount the Antec on a Thermalright SLK600 cooling an XP @ 1500 MHz, 1.73v. I also placed a temp probe in the same location as the fan sensor, both contacting the side of the CPU’s core. I monitored CPU temps with a Shuttle Ak31 modified to read AMD’s on-die diode directly.

I booted up, ran Prime 95 and found the following:

I took a screen shot of temps as recorded by the on-die diode: 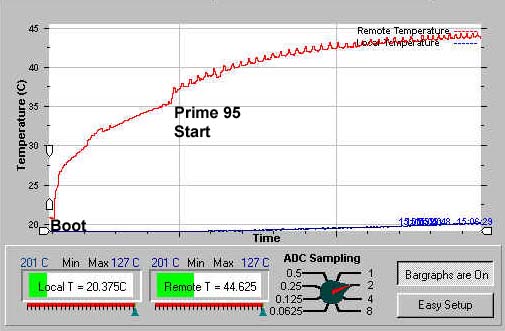 Screen shot of temps using the XP’s on die diode.

Comparing these results to the fan’s specs shows a wide variance between what one would expect and what happened. Motherboard Monitor showed fan rpms at about twice what is recorded with the digital tachometer, but I know the tach is dead on.

Thinking something was wrong, I wrote to Antec and received the following:

“Your tach is reading the right RPM which is close to our spec. Some motherboard BIOS may not detect the correct pulse signal from the fan.”

Still concerned about these results, I shorted out the sensor and the fan took off – I recorded 7200 rpm, which is close to the fan’s spec at 50 C. I then give it the “glass of water test” – I fill a glass with hot water, measure its temp while sticking the probe in the water and get:

I conclude from all this that there is NOTHING wrong with the fan – what’s amiss is contacting the CPU core to get a good read. So I start all over, this time taping the two probes next to the core and get:

Now this is getting frustrating! I look closely at the setup and I think now I know what’s going on.

I then tape it next to the core and find:

So, after repeated attempts, I can only tell you that:

I can only conclude that either the approach is fundamentally flawed or I am doing something dumb. I would be more than happy to post results from someone who is using this successfully.

As to Antec’s SmartCool, it does what it advertises; getting it to work for CPU cooling may be a real challenge. I should add that the sensor wire could be longer – about twice the length would be very nice.

Thanks again to Antec for sending this our way.

I have ordered one of the Gateway computers, and thought you might be interested in some specifics I got from a Gateway rep and an engineer he pulled in. I have posted to the forum also, but you might want

Q And A On RIAA

Some folks sent in some interesting questions and comments, and the answers may prove enlightening. I have a serious problem with the way things are going for p2p networking and file sharing. Stop right there. Who the hell cares what

KT400 Boards: What To Look For

What You Don’t Know Can Kill You KT400 boards are coming out. You want to look and compare features, fine. What you need to know if you plan on running at well over 200MHz (which you probably should be planning