NOTE: Some readers are writing in about premature pump failures with no success in getting Pentalpha to replace it. Take this under advisement before purchasing. 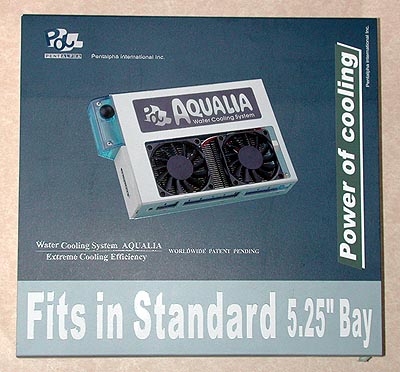 The good guys at Pentalpha.com dropped me a line a couple of weeks ago alerting me to Aqualia Watercooling Kit and were nice enough to send one to test out. When I first saw it, the thing that impressed me was how easy it should be to mount in a case – no cutting etc., just slip it into a drive bay. This morning it showed up.

I opened the kit and found the following parts: 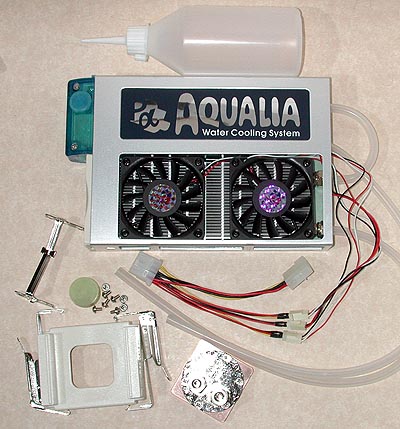 The kit includes an aluminum/copper waterblock, the pump/radiator/reservoir assembly, mounting clips for Socket A and P4, screws and thermal grease – all you need to get going (except fluid). The fans are low profile 70mm units – they are very low noise (I could not get a reading with a Radio Shack sound meter placed 8″ from the fan’s intake) running at 2183 rpm.

There is also a very good manual, which takes longer to read than to set the Aqualia up. This kit is REALLY simple. And it is small – I placed the pump/radiator/reservoir assembly on a standard CD ROM to show its size: 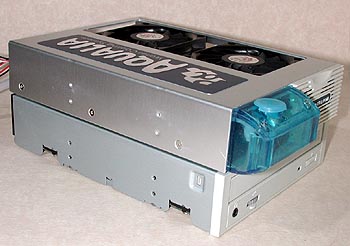 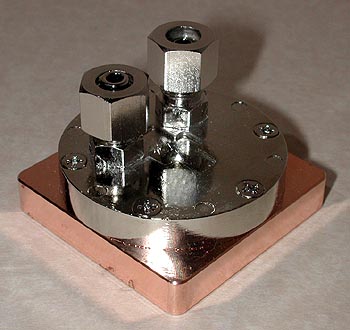 is on the smallish side – the nipples ID measures 4mm – this is going to restrict waterflow and hurt performance somewhat. Attaching the tubing is simple – remove the bolts, attach the tubing to the nipples and bolt them to the waterblock. The top is aluminum and the base is copper: 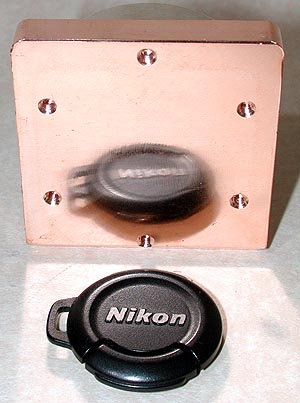 No polishing marks visible or apparent to the touch. A closer look at the reservoir assembly 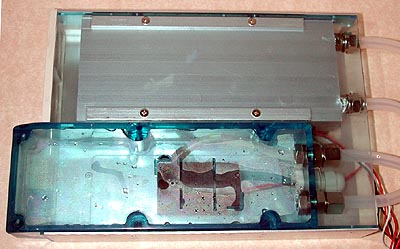 shows it with the 12 volt pump, with the bottom of the “radiator” at top. At first, the waterpump made some gurgling noises, but these disappeared after running for a while. The radiator should be called a “watersink” (visible from the back): 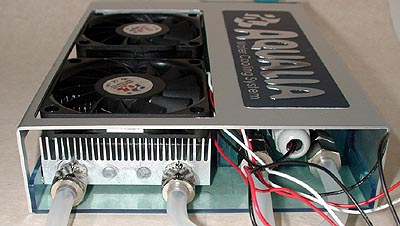 It’s more properly a watercooled heatsink than radiator (at least, compared to those that we typically see). This design is akin to that used by Koolance – which they don’t use anymore – and a design that I think is very effective, especially in space constrained applications such as this one. The view from the front 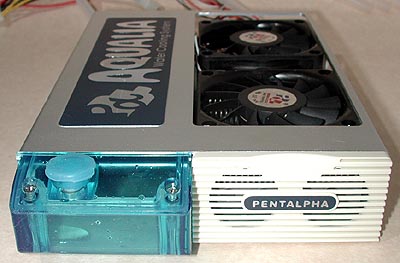 shows the fill port on the reservoir. Remove the fill cap, use the bottle which comes with the kit to charge it, run it and refill as needed. Simple.

Overall, I felt that the watersink was an excellent idea, but compromised perhaps by the waterblock’s restricted flow. The product literature claims 70 liters per hour, which is decidedly on the low side.
{mospagebreak}

I tested the Aqualia kit using the Die Simulator with the Socket A clip:

One concern I have is that inside a case, performance may suffer due to insufficient case airflow. In addition, the Aqualia must be installed with sufficient clearance above the fans – at least three inches – to avoid any airflow problems.

Overall, the Aqualia is about the easiest installing watercooling kit I have seen yet, with performance on par with other entry level kits. Although not yet in distribution, pricing of about $150 is expected.

Thanks again to Pentalpha.com for sending this our way.

The 15mm fans rise about 4mm over the Aqualia’s frame.

I received some emails asking me how the Aqualia would perform with faster fans. Scrounging around, I found two 4000 rpm 15 x 70 mm fans, replaced the stock 2100 rpm fans with the faster ones and tested the Aqualia with them:

Clearly the extra rpms make a difference, but not as much as you might think – 4 C over 100 watts. Noise increased to 57 dBA, which is not objectionable, but louder than the stock fans; a Delta 38 screamer will hit 68 dBA. Overall, modding this kit will yield improvements, but I don’t think the gain is worth it.

The Aqualia Watercooling Kit could a good way to go for quiet, but effective, “normal” cooling. For aggressive cooling, users are much better off with integrated cases or going DIY with quality components.

Thanks again to Pentalpha.com for sending this our way.

Like most overclockers, I began at a very wee age (at least 6 months ago) when I bought my first Athlon. Once I had assembled my Athlon 700 with an K7V mobo, I was shocked at the 94F temperature on