I purchased a syringe each of Arctic Silver thermal grease at Cooling Store last week and have now had some time to evaluate it. It claims to be more efficient than other similar thermal compounds, while being cheaper and NOT electrically conductive. 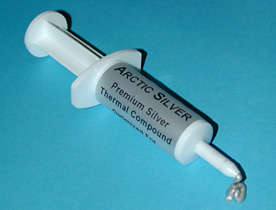 Reprinted by permission from Cooling Store

It is definitely cheaper, about $5 per syringe cheaper for the same amount as the Chemtronics stuff, and it looks neater, being very silver in appearance and not gray. As to its effectiveness, at idle I found no difference – no big surprise. However at full load it was worth a solid 2 C cooler than the Chemtronics silver compound.

As to the electrical conductivity, I didn’t know how to scientifically test this, so I just squeezed out about a one-quarter inch ribbon of each on a piece of cardboard and touched each end with the leads from a Fluke 77 set to audible continuity mode. When a closed circuit is sensed, the Fluke emits a loud continuous beep until the circuit is broken.

The Chemtronics compound is most definitely conductive. I didn’t even have to work the lead ends around to get it to beep. Amazingly, the Arctic Silver compound did not get the Fluke to beep. I tested three different ribbons of the stuff with the same results. It’s not logical, but their claim seems to be true.

The only problem I had was in the syringe applicator itself. The plunger on the large-contact-area compound had taken a set and was very difficult to compress initially. I used more and more force until suddenly it let go. Out came the silver compound and in great force, too. I probably squeezed out $4 worth of the total syringe in less than a second, so it was off to find an empty film canister to store the excess.

Will I continue to use this stuff? Only until something better comes along. It’s a good product at a fair price, and to me it seems to live up to its claims.

NOTE: Lyle Wong is not associated with the Cooling Store and has not received any compensation or consideration for this review.