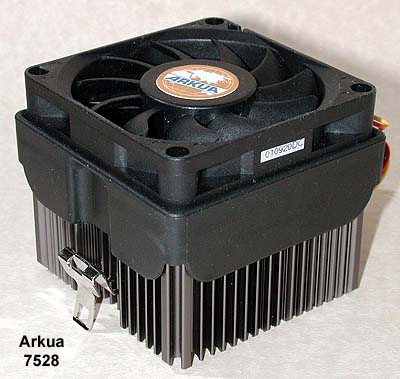 The good folks at Arkua™ were nice enough to send a sample of their Socket A heatsink, model #7528. It features a solid copper core surrounded by extruded aluminum fins. The core appears to be well fit – reminds me of the Alpha base. Effective cooling requires a very tight fit so that there are no air spaces between the copper core and the aluminum fins.

The heatsink is powered with a 70 mm fan – a tradeoff between excessive noise and high airflow through the fins. It also comes in a Delta 38 version which will most likely be noisier but more efficient. I measured fan noise with a Radio Shack sound meter placed 8″ from the fan intake and recorded 60 dBA¹ – slightly less noise than a YS Tech 26 cfm unit. 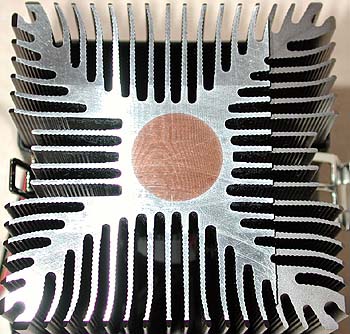 is relatively smooth with slight machining marks. Note that the CPU does not locate on the center of the copper core, although almost all of it contacts it: 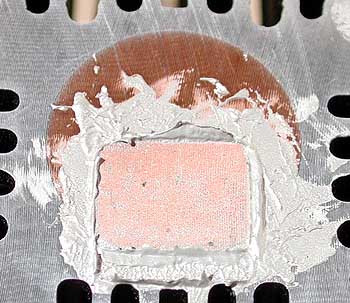 NOTE: I used a lot of grease to show the footprint.

The clip requires a screwdriver to mount on the socket, but is one of the better of this type. The slot for the screwdriver blade is wide and deep enough so that the chance of a disastrous slip is minimal.

All told, the Arkua™ appears to be well made and fairly easy to mount and dismount from a socket.

The Arkua was first tested on the CPU Die Simulator which gives results that are unaffected by motherboard influences. Tests then were conducted on a variety of motherboards as examples of what users might see on their systems; results will vary depending on local factors such as case airflow, ambient temps, etc. The PIII MBM temps are on-die, the others are in-socket thermistors. Temps were taken after temps stabilized while running Prime 95, usually after about one hour.

The Die Simulator results ranks the Arkua™ in the Heatsink Roundup alongside the Thermalright SK6 – nice company! Results by users will depend on continuing QC to ensure a close fit between the copper core and fins.

The Arkua™ turns in a decent performance at noise levels that are not excessive. The Delta 38 version should do better but with objectionable noise levels.

¹This is not comparable to manufacturer sound ratings – manufacturers usually take readings at a distance of three feet from the fan.