Only in the last couple years have prices for the bigger monitors gotten somewhat reasonable. As they have, people have migrated to them.

Nowadays, most gamers wont settle for anything less than 19 inches, and a few fanatics go as high as 24 inches.

What has been off-limits to gamers up to now have been LCDs. Nothing will turn a room full of gamers into Brave Sir Robins faster than those three little letters.

LCDs are popping up everywhere in non-gaming life, from corporations to high tech movies.

Gamers, on the other hand, are not fans of the slim shadys.

The conventional wisdom on LCDs in the gaming world has been: slower refresh, lower resolution, shadowy images, and more ghostly images than a haunted house. All this for a lot more money. These are big drawbacks to gamers.

While CRTs get the job done, they also have serious side effects. Get up to the 21’ Bohmma Mommas and the weight totals send chills down the spines of many pack wood desks, not to mention yours when you have to move it.

CRTs backsides stick out enough to give even John Goodman a run for his money. Desk space is swallowed up in a jiffy, making snacks and cokes a knee balancing act.

Up to now, CRT vs. LCD has equalled Picture vs. Convenience.

The good news is that newer LCDs are improving to the point where it isn’t as much an either/or choice.

Of course, big LCDs still cost an arm and a leg compared to CRTs, and there will always be people ragging on those who decide eating is optional for six months to scrounge up the funds for a big LCD. That will never change.

The lack of reviews for the bigger LCDs is another problem. It’s easier to scrounge up a review on a T-120 super disk drive.

So let me tell you what I’ve bought lately, and what I’ve found. 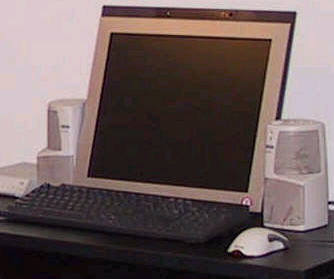 Sure, it’s thin. But was it good-looking, too?

I tested this monitor daily with Tribes 2 at 1280X1024 with every option on its highest setting running a GeForce 3 Ti500 and never saw a ghost image.

I never saw a ghost image at the same resolution with everything turned on in Quake 3, either.

To be fair, I never tested this monitor on the digital port but the analog looked just as good as any CRT. Best of all, I found it (and other LCDs) easier on the eyes, making headaches from hours of gaming a thing of the past.

The only fault was a single red pixel out in the upper left corner. This remains a major drawback to LCD monitors. Pixels do go out and very few companies will swap you for a new one when only one or two go out.

Nor is the price for the cash-challenged; the N-80 is just under 1600 smackers.

What am I using now?

Two home loans later, I’ve moved to the Samsung 210T, with a Gainward 4600 card along for the ride. 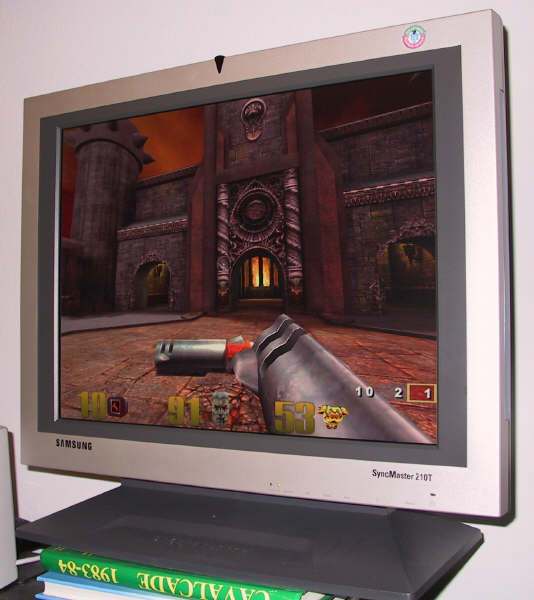 This beautiful bastard is 21.3 inches, which makes it comparable to a 22 or 23 inch CRT.

Features include S video, digital DVI and analog inputs. It even comes with a remote.

The analog picture is OK, about the same as some off-brand CRTs of the same size.

If you have a DVI output on your video card however, use it. It’s a whole ‘nother world.

The digital picture is clear, crisp and vibrant. I expected some degradation and ghosting when using the digital signal but to my joy I didn’t see one shadow in game play.

The only ghosting I did see was the opening cut scene of GTA 3, but I saw the same ghosting on the analog output.

Game play was great. No matter how many cars I smashed up or bodies my bumper fell in love with, the picture stayed crisp and clear. Pricing for this monitor in late June was $2500-$3000. Now it’s under 2Gs.

Yes, it still means no food or clothes for a few months, but the price cut means you might be able to sneak some Raman noodles in every now and then.

The prices are now falling on the big ones. The bigger LCD boys are going to become more and more attainable over the next year.

The time is drawing near, my friends, when we all will retake our rightful desk space from the CRT monsters.

(Ed. note: I use two 21″ Trinitrons, which does rather look like a John Goodman-Roseanne reunion. Mobile? Jabba the Hutt is mobile, not these two beasts. They both rest on an industrial-strength, industrial-ugly table. If my house’s foundation wasn’t settled before, it is now.

I’m figuring two years and out for LCDs. Maybe you should, too.—Ed)

I believe I’ve found a solution to a problem that is causing many headaches to some overclockers out there. That is the dreaded KT133A issue, which is running a high-speed Athlon B at 133 FSB. I bought a AVIA stepping

Ambivalence If I had to describe the general tone of the responses I got, that’s the word. Contrary to perhaps some expectations, there was a general lack of stridency and acknowledgement that this was a close call that turned on