As I mentioned in my original test report of the Iwill P4HT, we’ve obtained some excellent test equipment that, hopefully, will give us a little more insight into what’s really happening on components under test. Today we’ll be using our Tektronix 2246A oscilloscope and a Fluke model 8050A 4.5 digit DVM to take a look at some signals on the P4HT while it’s being tested.

For testing the board we’ll be using the previously discussed Ultra-X Ram Stress Test Pro card along with their PHD PCI test card (whose firmware I just updated).

For those of you that aren’t familiar with oscilloscopes, they are rather complicated devices designed to provide the user with a continuous, real-time display of voltages changing over time. The sensitivity of both the voltage and time being measured can be adjusted independently and with extreme precision and accuracy.

In simple terms, for each signal being measured, an oscilloscope has a time base for controlling the rate at which measurements are bring displayed on the screen and a voltage dividing circuit so that the voltage displayed is of the proper scale. Switches and knobs on the scope’s front panel control these circuits.

There are also NUMEROUS other control functions relating to filtering out unwanted signals and controlling synchronization between what’s being measured and the triggers that cause them to happen.

Why, in testing a motherboard or other PC component is it interesting to look at signals with an oscilloscope? Let’s take a very simple example and see:

We all know how important a good power supply is in being able to run our PCs reliably. The ideal power supply should deliver never changing DC voltages (12, 5, 3.3, etc.) to all components regardless of the ever-changing loads being drawn from them.

If we use a device like a digital voltmeter or a program like Motherboard Monitor (MBM) we can only see readings at particular instants in time, or with another type of meter, voltages averaged over time.

We have no ability to see if things changed between the sampling times in the case of peak-reading meters (the former) or what the peaks and valleys look like in the case of averaging meters (the latter). Basically, these devices can give us individual points on a graph of voltage vs. time, but they cannot connect those points. An oscilloscope overcomes all of these limitations by creating (in our case) a continuous graph at 100 Mhz on its screen.

Some of you are probably saying to yourselves "Self, if we’re going to look at DC voltages on an oscilloscope, all we should see are horizontal lines on the screen since DC isn’t supposed to change over time…changing voltages over time would be AC – right?"

Well, in the ideal world you would be exactly right. We all know however, that the ideal world is far from the real world. What we’re looking for here is "noise", or more generally "unwanted signals" introduced by motherboard components, power supply components and "environmental influences" (like when your refrigerator motor starts up or the room air conditioning compressor turns on or off.)

These, as well as many other factors, introduce a "time" element in the voltages delivered to a PC that we can measure and determine if their magnitude is enough to make something fail or come close to it’s limit of tolerance.

OK – on to some measurements.

First, a simple and informative one: We’re going to look at the ground plane of the motherboard. In theory (again with the ideal world), any ground point on the motherboard should be at 0 volts all the time.

The pictures speak for themselves. In these scope shots, we can see nothing interesting with the voltage scale set to 0.5 volt/screen division: 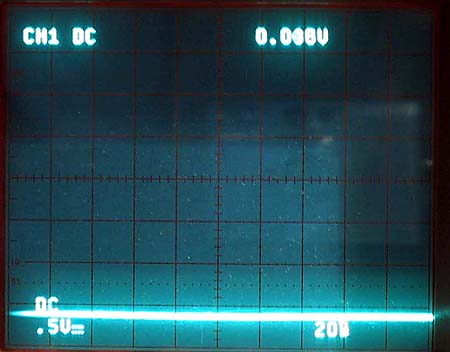 But when we set the voltage to a much more sensitive scale of 20 millivolts per division, we can really see that there’s some noise here. We can see in the second trace that the amplitude of the noise on the ground plane is about 35.8 mv, 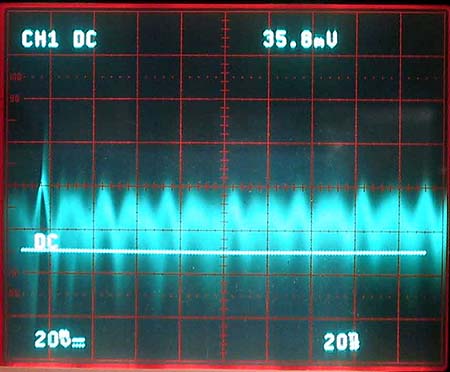 and in the third trace, 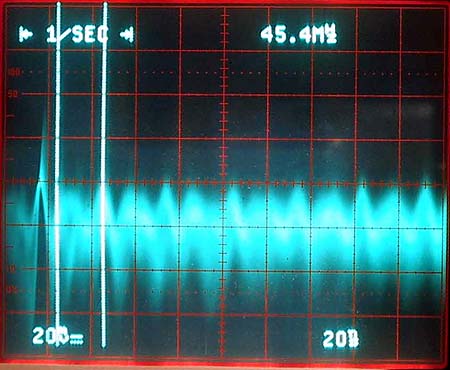 we can see that the frequency of the noise is about 45.4 MHz.

No, it’s actually quite a good reading, since there’s nothing on a typical motherboard whose operation should be different with a supply voltage that varies plus or minus 19 mv. What does this small ground noise value tell us?

It says that the physical board is well designed and has nice short traces and no "leaky" electrical components.

Next, let’s take a good look at the 12 volt portions of the board:
{mospagebreak} 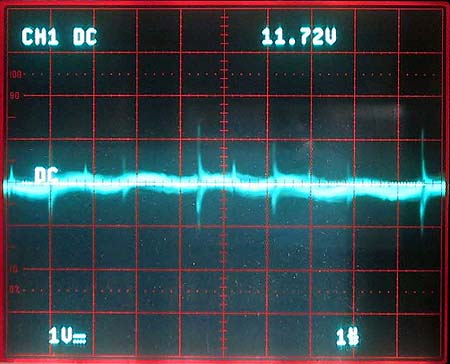 In this trace, we clearly see something quite different than what we saw on the ground plane. There’s a little noise at about the same frequency as the ground plane, but we also see that there are some short noise pulses of approximately 2.5 v peak-peak and about 0.75 microseconds between them.

After watching the 12 volt readings at various points on the board, I realized that the readings we see are directly related to what the system is doing in response to the PHD PCI tester. When running tests that stress the CPU or the RAM, the voltage hovers around 11.67 volts, but when the system is idle or doing things related to the PCI bus, the voltage increases to 11.789 volts. Intuitively, we would expect a little drop in the voltage as the load is increased, and this observation validates our intuition. 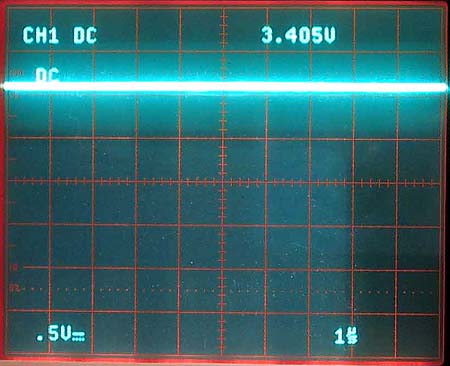 The DVM reads 3.336 vdc and the scope is reading 3.405 vdc. The scope trace is perfectly flat – this tells us that there is no measurable noise on this line, which is quite an amazing achievement in a very high speed PC.

The 5 volt line (below) also exhibits rock steady, noiseless voltage. The DVM reading is 4.985 vdc and the scope reads is as 5.02 vdc. 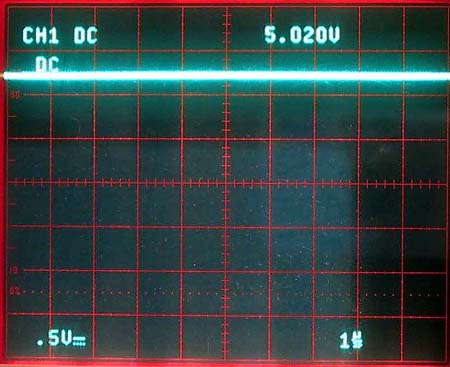 The voltages that we just looked at are the ones being supplied directly by our power supply. In order for the motherboard to overcome some of the noise and variability of voltages, as well as to create voltages that the power supply doesn’t directly deliver (Vdimm, Vcore, etc.), the board contains a number of voltage regulator integrated circuits.

All modern motherboards use voltage regulators that are actually specialized transistors. They are called MOSFETs (metal-oxide semiconductor, field effect transistors). (Everything that you might want to know about power MOSFETs can be found HERE.)

The MOSFETs are at the output stage of a circuit whose reference design is very clearly spelled out by the CPU manufacturer. In our case, Pentium 4 motherboards use an INTEL SPEC referred to as VRM9.0.

The circuit (which I’ll explain in much more detail in an upcoming article) contains a number of other components that control the timing of current delivery and the regulation of the voltage. This circuit is called a “Synchronous Buck Circuit” and is what you all have seen referred to as the three phase power regulator.

Let’s see what the MOSFET outputs look like. These are the voltages (pre-regulation) that are being delivered directly to the CPU as the Vcore: 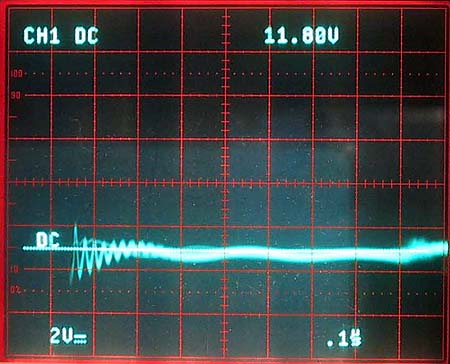 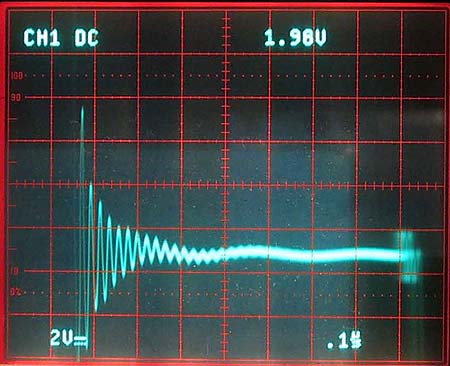 OK, so now that we’ve had a "look" at the voltages being delivered from the power supply and the output of the regulators feeding the important parts of our motherboard, what have we learned, and what logical conclusions can we draw?

First, I can feel very confident in saying that the Iwill P4HT is quite a "clean" motherboard. The ground plane has surprisingly little noise and the voltages utilized on-board are rock stable. The board is not stressing this Vantec power supply at all and, looking at things over a reasonable time frame, nothing appears to go out of specification when overclocking.

One aspect of the results that might raise a little concern is the measured amount of noise on the Vcore lines:
{mospagebreak} 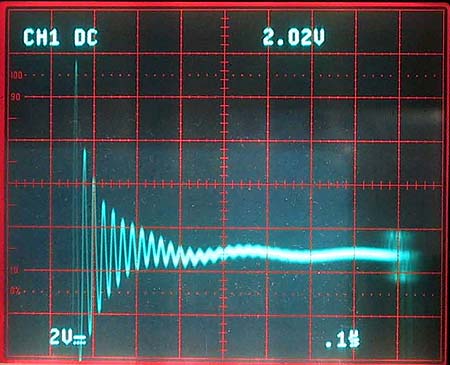 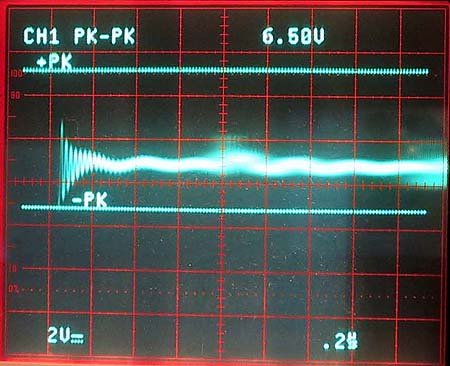 As you can see in the measurement table and on the scope screen shots, there are large, noisy peaks riding on top of them.

We see these spikes because at the intersections between the three power phases in the VRM circuit, one of the MOSFETs is being switched off and another one is being switched on. (Each pair of MOSFETS delivers power to the CPU for one third of the time, thus creating one of the 3 phases.)

The current swings can cause huge spikes on the voltage lines, and although they are damped out later in the circuit (as we’ll see in a second), their amplitude is directly related to the quality of the components used, the size of the PC board traces and their precise placement on the motherboard.

Do things wrong and the board will be amazingly unreliable, and it’ll be VERY difficult to see what’s really wrong. Do it right and the designers (and us) should see a perfectly flat scope trace at the Vcore pins of the CPU.

The spikes are easy to see at the output of the MOSFETs, but the real question is, are they still there after each phase is regulated via some big capacitors and a toroidal inductor (those donut shaped magnets that are wrapped with wire, sometimes called chokes). 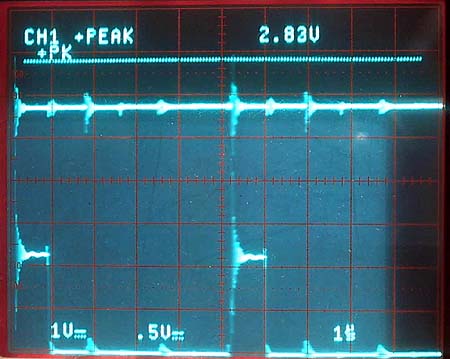 What do these ripples in the Vcore mean to actually running this, or any other motherboard?

The fact is that as long as the magnitude of the ripples is no more than ~10 – 20% of the total tolerance for the Vcore, it won’t effect the operation of the overall system. If it begins to be a measurable signal in the order of magnitude of the rated Vcore tolerance (~150 mv for a Northwood and ~175 mv for a Willamette CPU), then we’ll see failures happen.

A possible effect of having power supply ripple (or other noise) though is the shortening of the life span of components. Intel specifically mentions this in many of their documents related to power circuitry.

What else have we learned?

Well, we’ve learned that the voltages displayed on the BIOS Health Monitor screen aren’t too far off but they could be better:

What can we say about the Iwill P4HT after all of this exhaustive testing?
{mospagebreak}

My first thought is that the designers at Iwill have done an excellent job of creating an esthetically pleasing, feature packed, great performing motherboard in the P4HT.

The tiny amount of ground plane noise is a strong indication that Iwill took the time to design and manufacture a very high quality circuit board. Their placement of some of the power components though could have been better as evidenced by the noisy Vcore input.

In the long term, I doubt that users will encounter any stability problems with this board. I can feel confident about this for a few reasons:

As much as I like this motherboard, there are a few things that I wish were different:

One last comment for those of you who wrote to me about overclocking with the memory running asynchronously with the 3:4 multiplier: The maximun overclock I could achieve with no errors reported on either of the Ultra-X test cards was:

What we did in this article was take a first look at a modern motherboard using some very informative test methods and equipment. There are numerous other interesting measurements that we can and will make on various components in the coming weeks. I appreciate all the e-mails that you folks have sent and I would like your suggestions and comments about what other areas you would like to see in more detail.

The next motherboard I’ll be testing is a similar Intel 845PE motherboard from a new company called Albatron. Preliminary testing shows it to be at least as strong of an overclocker as this excellent Iwill product.