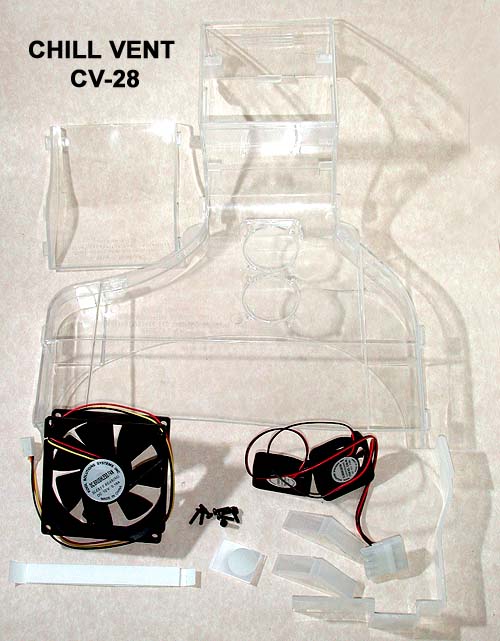 The two 40 mm fans can direct air at a video card, and the 80 mm is a “booster fan” to increase air flow at the CPU heatsink.

The good guys at Kool Solutions were nice enough to send a sample of their CHILL VENT CV-28 Air Duct to try out. This duct is designed to pull cool air from the bottom of the case up to the CPU intake fan, claiming “…a CPU temperature reduction average of 3°C to as much as 10°C.” The following animated drawing from Kool Solutions demonstrates how it works:

This is a very difficult product to test – there is no way I could devise a test that would apply to all possible combinations of case design, CPU heatsink and temperature differentials within a case. However, there are a number of links to other sites on the Kool Solutions website that have done case specific testing and all seem to substantiate some improvement, usually in the low single digits, of CPU temps.

Rather than add to the anecdotal testing being done, I thought a discussion on ducting in general and what the CHILL VENT can do under what conditions might add some meat to the bones.

In general, ducting cooler external air to a hot spot, such as the CPU intake fan, is a no-brainer – it will definitely decrease CPU temps, depending on the temp differential between air temp at the CPU fan’s intake and external air temp; the more the differential, the higher the performance benefit.

The air temp at the fan’s intake is the floor; if the air temp is 35ºC or 40ºC going into the fan, then there is NO WAY an air cooled heatsink will give you 40ºC at the CPU. The following table lays out what to expect for a 100 watt CPU:

If, however, the case temp is 40ºC, then the application C/W is higher than the test C/W – in this case:

This assumes the temp at the CPU fan inlet equals case temp.

Comparing the two shows that higher case temps cause a 15ºC rise in CPU temps. I receive emails asking why a user does not see the same temps as in a test, and invariably it comes down to case temps of 10 – 20ºC over ambient. One reason watercooling is so effective is that radiators use ambient air cooling, either because they are externally mounted or mounted in the front of the case.

However, if you have a case with very good airflow, the temperature differential between ambient and temps at the intake fan may be minimal. The better the airflow, the less the temp differential – consequently the less benefit from an air duct. No rocket science here.

The CHILL VENT, however, does not directly duct external air – it ducts cooler air at the bottom of the case to the CPU fan intake. As such, its performance depends on the temp differential between the case bottom and at the CPU fan’s intake. The worse the case’s airflow, the higher the temp differential and consequently the larger the performance benefit, assuming the case effectively vents waste air.

In addition, there is a “booster fan” at the top of the duct directing air towards the CPU fan; it’s relatively quiet. The benefit you might see from this is variable and could be negative – it depends on the relative difference between the CPU fan and the CHILL VENT fan as follows (this is fan stacking):

Considering the CHILL VENT fan shipped with it is a modest 80 mm, 2.16 watts, the number of cases where the fan is a positive addition may be limited. Also note that the 80 mm fan is loosely fit: 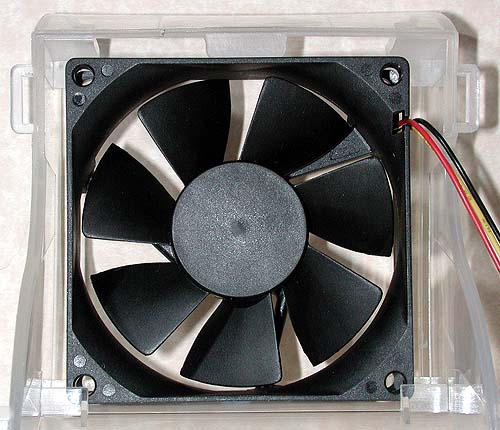 There are air gaps around it which may mitigate somewhat situations where the CPU fan is larger and the duct fan is smaller in size and wattage.

Finally, the CHILL VENT’s effectiveness will depend on the fit between the duct and the CPU fan – a loose fit will allow air to escape to some degree, blunting its impact; it’s sized to fit a 92 mm fan.

Considering all these variables, I think you get a picture of why it’s difficult to unequivocally state that the CHILL VENT will do “X” for you.

IF you have minimal case ventilation, and IF you are using a smaller CPU fan such as found on Intel and AMD retail heatsinks that is lesser relative to the CHILL VENT fan, and IF the temperature differential between the case bottom and CPU fan is high, THEN you will most likely see a performance boost from this product in CPU cooling, most likely a CPU temp reduction in the low single digits.

Conversely, well ventilated cases with minimal temperature differentials and heatsinks with aggressive fans will most likely see minimal or no gains. However, if you’re trying to squeeze the last degree out of CPU cooling, then the CHILL VENT may well suit your needs.

A look at a number of PIV cooling solutions. — Joe
Read More