The following article is a translation from a Russian site called NAP.com.

ChipCoolers makes and sells heatsinks which are used not only in computers but also in other electronic systems. This means that ChipCoolers has more diverse cooling experience than firms specializing just on CPU cooling. Their new generation of heatsinks differs from any we have ever seen – these are not empty words.

In 1999, ChipCoolers started to use an essentially new material for radiators – CoolPoly. This material is a polymer, which, according to the manufacturer, obsoletes aluminium. What are its advantages? CoolPoly has greater thermoconductivity than aluminum and is 30 percent lighter. As such there is no necessity to use fans or, at least, it is possible to use smaller size fans. 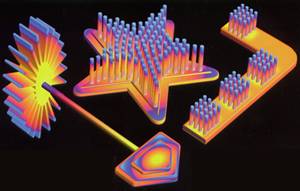 This enables lower noise levels and minimizes battery drain in portable computers while, at the same time, saving space due to its thermal efficiency. In addition, ChipCooler heatsinks can be molded in a variety of shapes, whether it be a triangle, circle or star. These non-standard forms are extremely effectively for use in cramped portable computers.

Heatsinks made with CoolPoly for portable computers with low power CPUs is one thing – whether it can be used for overclocked CPUs with higher thermal loading is another story. Will this new material withstand such loading? Will it melt whether from high temperatures?

Cooler HTS268-D is a round pin heatsink of dark-grey colour molded from CoolPoly. It has 39 4mm cylindrical pins with a height of 20 mm. This cooler has a diameter of 50 mm and height of 27.5 mm. There are five holes in the top part for mounting a 40mm fan, which can either blow in directly or reversed. 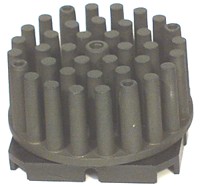 The base is a cylinder 5 mm high with a diameter of about 33 mm. On the base of the cylinder is a thermal pad – for the best cooling, I recommend replacing it with thermal paste.

Looking more closely at the heatsink, it is not possible to use a fan larger than 40mm without some alterations. A 50 mm fan would require a heatsink of about 65 mm diameter, and it would cause problems with compatibility. But also mounting a 40 mm the fan on HTS268-D is not so simple. The holes do not take standard screws, and the screws which are sold with fans are not possible to use here. Either you have to use thinner screws or drill larger holes, neither of which is that easy.

Cooler HTS174-P is a round plated heatsink instead of fins. As you can see, it is a cylinder with a diameter of 20 mm with 6 round thin plates 42 mm across. On the bottom plate, there is a cylindrical ledge approximately 5 mm high and 33 mm around with a groove. In the top part of a heatsink there is a small cylindrical groove about 3 mm across and deep. It was possible to mount cooler on the CPU with the aid of a screwdriver. 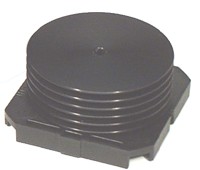 It is completely clear that an extrusion of this design is impossible, and to mill it would be too expensive; hence, we deal with the melted radiator. Is is not possible to install a fan; a fan above the heatsink will work only on the top plate, and the round shape would not accommodate a fan mounted sideways.

This design has an obvious problem – if you mount it vertically (the axis of the cylinder is perpendicular to the ground), heated air will rise upwards and further heat up the top plate. The top plate then will have highest temperature and that negatively effects CPU cooling. Therefore, we recommend the use of such heatsinks horizontally (the plane of the plates is perpendicular to the ground, the axis of the cylinder is parallel it). Fortunately, this cooler is used for Celeron slot 1s – therefore, most of the time the orientation will be correct. 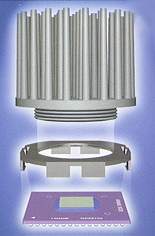 As you can see, the heatsink consists of two parts. The base is mounted on the CPU and then the body of the heatsink is screwed onto it. Once it contacts the CPU, it can be tightened. Due to this design, it is extremely secure and it would take a lot to get it loose. In addition, removing the heatsink is easy – reverse twist and off it comes. Because many heatsinks use the same base, it facilitates easily changing out different heatsinks.

Such a system has one drawback – it cannot be used on BGA chips. However, the advantage also is great – one heatsink can be used on chips of different sizes by changing only the base.

HTS174-P and HTS268-D are designed for cooling of Celerons. Here it is important to note that these are for Slot-1 Celerons. Installation on Socket7/370 CPUs is impossible. But here the universality of ChipCoolers is evident – for minimal costs it is possible to develop other mounting clips to use them.

Installation is quick and easy; first, the plastic base fastens onto the CPU, and then the heatsink is screwed on. When I installed it I had a small problem – the Celeron 333 I used for the tests was a tight fit onto the base. There was less than 1 mm play and putting it on the base required a fair degree of effort. After that, I screwed on the heatsink. It is recommended that you remove the thermal pad a pad and use thermal paste instead.

The thermal pad was removed and instead thermal paste was used. On both coolers, with the help of screws, a YS TECH fan of 4300 rpm was used. The fan was both in blowing air directly into the heatsink and reversed. Temperature of an air was 24 C. Each test was done three times and the average is reported.

As we see from the diagram, the HTS268-D is the best in all three cases. The best performance of the HTS268-D was with the fan pumping out hot air, a normal phenomenon for a pin-fin heatsink.

What I can tell you about the HTS174-P? This cooler will be good for those who are “space challenged” – its only advantage – small size. You can’t use a fan on it.

The ChipCooler heatsinks HTS174-P and HTS268-D are OK for non-overclocked and less overclocked CPUs. Their advantages – easy installation, easy removal small size and low price. Their drawbacks – low productivity, use of a thermal pad instead of paste and no way to use a fan on the HTS174-P.

If you have Celeron, I can recommend buying cooler HTS268-D. Also do not forget to buy a 40mm fan.

Special thanks to Jim Palmisciano (ChipCoolers)

Russian version available at NAP.com
Copyright (C) LIKE OFF 1998-2000.
All rights reserved.