SUMMARY: The return of analog gauges? 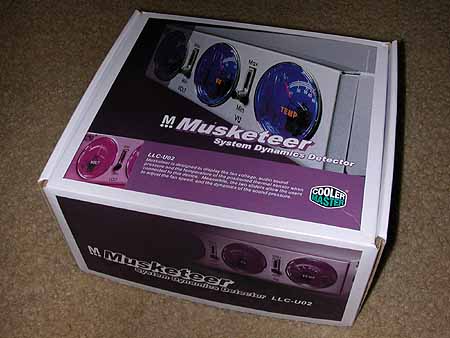 The good folks at Directron were kind enough to send out a CoolerMaster Musketeer
multifunction panel to take a look at today.

At first glance, this item looks a little like someone lifted the console gauge package out of a 1969 Camaro and stuck it into an optical drive shell.

We’ll start off here by taking a closer look and then see how it functions.

The Musketeer is designed to fit into a 5.25″ optical drive bay and is similarly sized to a CD-ROM drive. The enclosure is a heavy gauge steel and should be more than up to
any punishment you could give it.

Installation is virtually the same as mounting up an optical drive, with the exception of there being four cables instead of two. None of the cables are identical to each other
however, eliminating any confusion as to what goes where.

Across the front of the unit are a trio of gauges, which show readings for Volts, “VU” or sound pressure, and Temperature. Between them, are a pair of sliding switches, the left one
controlling the amount of voltage used by the single fan that can be attached to the unit, the right slider controlling audio sound pressure.

Across the rear of the unit are where the cables (see below) are plugged in. From left to right are the ports for the included temperature probe, power input, audio connection, and a three pin fan connector. 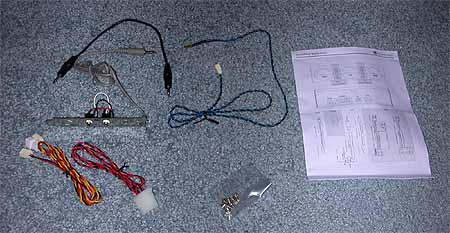 The accessories included with the Musketeer are shown above.

The yellow and red cables are for connecting fans to this unit, 3 and 4 pins respectively. The yellow 3 pin cable is configured to split off the RPM sense lead to plug
into the motherboard header, while the two power leads go to the Musketeer. The red four pin cable is a straight adapter for using a fan with a four pin Molex power connector, allowing it to plug into the 3 pin header on the Musketeer.

Above those are the two audio cables. The grey cable with the bracket attached is described in detail below. The shorter black cable is used as a jumper from your sound
card to the bracket.

Next to those is the temperature probe cable (blue). It’s similar to most thermal sensor cables included with panels like this (DigiDoc, et al), but is a good deal longer
than most. It measures 80 cm long (31+ inches for us Yanks).

On the right is the include instruction manual, and below that is a bag with four mounting screws. The manual is translated in nine different languages, and is (at least in English) quite comprehensive. 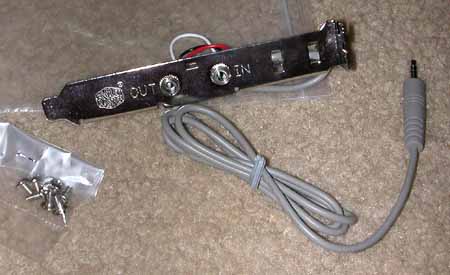 The cable attached to the bracket (grey cable in the picture above) connects to the “VU” port on the back of the Musketeer. 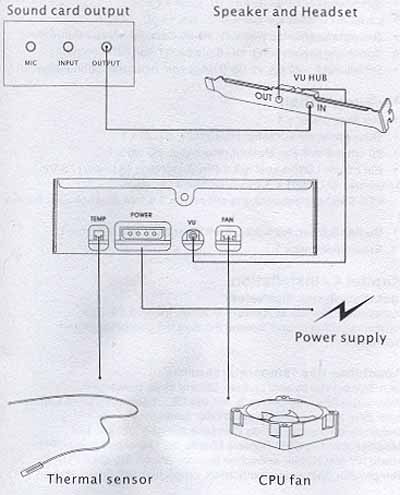 This diagram is from the manual and shows where everything gets connected. Very easy to connect, and no software is required to operate – true “Plug and Play”.

A closer look at the gauges 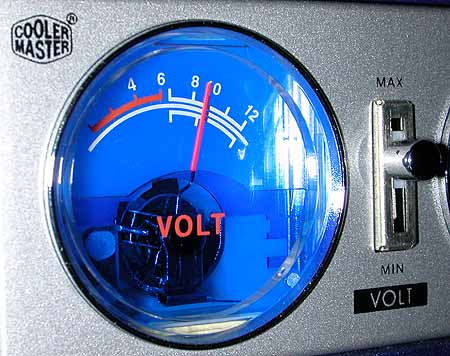 The Volt gauge, on the far left, sweeps from 0v to 12v. The slider to its right controls the amount of voltage supplied to the single fan that you are able to hook up to the Musketeer.

The gauge in use shows the amount supplied, not the system voltage. So, if you have the slider at its lowest point, it supplies low voltage (ergo; lower fan speed, quieter
operation). At its lowest, it supplies about 6v to the connected fan. At its highest, the gauge reads about 10v.

One might think at its highest setting, this unit would supply 12v directly to the fan, but it doesn’t. Checking the output with a multimeter showed the output at the highest setting to be just barely over 11 volts. 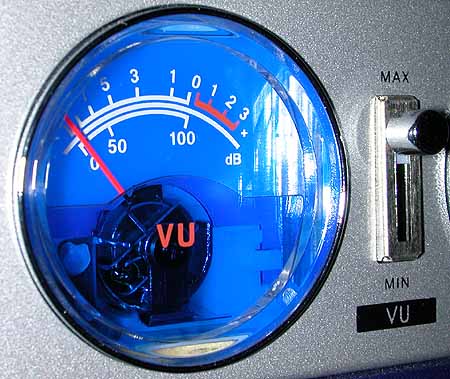 The VU gauge, in the middle of the unit, and its accompanying slider, measure (in dB) and control the amount of pressure your speakers receive, not the volume level.

The slider is a bit redundant, as in the directions they instruct you to set this at its highest setting, and then “adjust the software volume so that the peak volume (shown on
the gauge) does not exceed the red zone (on the gauge)”.

I understand the purpose of this (to help keep you from blowing out your speakers), but not the sliding switch. Why have it if you’re only going to set it to the maximum setting? 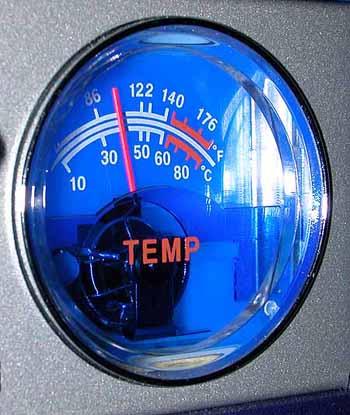 Finally, the Temp gauge on the far right displays the temperature of whatever item you’ve attached the thermal probe sensor to. I secured this to the backside of my video card.
making this a GPU temp sensor.

The gauges are backlit, using a pair of blue LEDs behind each of the three gauges. With the lights turned down, they look quite nice. They’re actually a fair amount brighter than this
picture makes them appear to be. 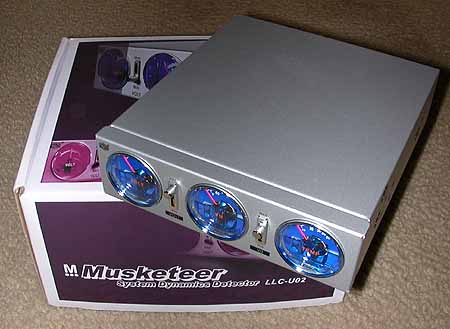 Those with a touch of nostalgia will most likely be interested in this product. The gauges harken back to days gone by, before the digital revolution put LCDs into everything. It is a
handsome item and does function as intended.

However, it’d definitely not the most useful item I’ve ever had the privilege of testing.

The ability to only control one fan is definitely a downside. Most system control panels similar to this item allow user adjustment of three, and sometimes more, fans. Being able to send only 11 volts to that lone fan is also somewhat disappointing.

The ability to control sound pressure is somewhat obscure, and the way it’s controlled is a trifle odd as well. I still don’t quite comprehend the slider’s use – if you’re directed
to max it out and then adjust other settings elsewhere.

The temperature gauge is the best of the lot, in my opinion, as it’s definitely functional and does seem to be fairly accurate. However, this too has its drawback. This drawback applies to all three gauges really, not just this one.

The gauges are extremely hard to read unless you are right on top of them. The numbers on the gauge faces are very small, and even with familiarity with the gauges, it’s a bit hard
to tell anywhere but up close what the readings are at any given time. Without individual numbers on the Temp gauge, it’s a bit of a guess as to exactly what the temperature of the
object being monitored is. I don’t know that I’d attach this probe to anything too critical.

On the up side, the Musketeer is extremely easy to install and get working. The included instruction sheet is well laid out and very comprehensive. The cables included are longer than you might expect, making routing them effortless.

This item seems to place more precedence on form over function. While it’s definitely a visually appealing item, it’s not the most useful. In the right themed setting, it might be
just the perfect accessory.

I’d like to thank Directron for sending out this CoolerMaster Musketeer
multifunction panel for us to look at today.

How To Get A Faster Tortoise

As you might have noticed, Vista isn’t selling all too well. Based on some numbers popping around, somewhat less than half the computers sold last year came with Vista, with business users in particular having a low take-up rate. A

Competent people handle problems; smart people prevent them. When we look at an area like Internet pricing errors, we need to look at the likely causes of them. If you figure out causes, you can figure out preventions. Now if

I’m putting this up mainly to see how many people are interested in buying a wooden case from someone else (as opposed to DYI). There is no actual product yet. So I’m going to have the emails come to me