For those of us who enjoy gaming on consoles as well as PC’s, Corsair has just launched it’s HS75 XB wireless headset. Marketed as Corsair’s first officially licensed headset for Microsoft Xbox, the HS75 XB was designed to be compatible with Xbox One, Xbox Series X, and Series S consoles. But if you happen to be a hardcore PC gamer, you’re in luck. The HS75 XB can be connected to a PC by way of an Xbox Wireless Adapter for Windows (sold separately).

Pricing for the headset is listed at $149.99 and can be found on the Corsair website or any E-tailer that sells Corsair products. Here is the official launch announcement. 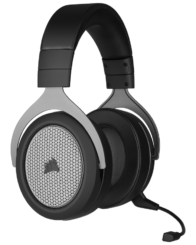 FREMONT, CA, October 22nd, 2020 – CORSAIR®, a world leader in high-performance gaming peripherals and enthusiast components, today announced the launch of its first officially licensed headset for Microsoft® Xbox, the HS75 XB WIRELESS Gaming Headset. Compatible with Xbox One and the upcoming next-generation Xbox Series X and Series S, the HS75 XB WIRELESS delivers the fantastic sound and comfort that the CORSAIR HS Series is known for, connecting directly to your Xbox console via Xbox Wireless without the need for a wireless receiver, or to a Windows 10 PC via the Xbox Wireless Adapter for Windows (sold separately). Complete with immersive Dolby Atmos® for precise three-dimensional sound and a noise-cancelling uni-directional microphone, the HS75 XB WIRELESS is the perfect companion for your current or future Xbox console. 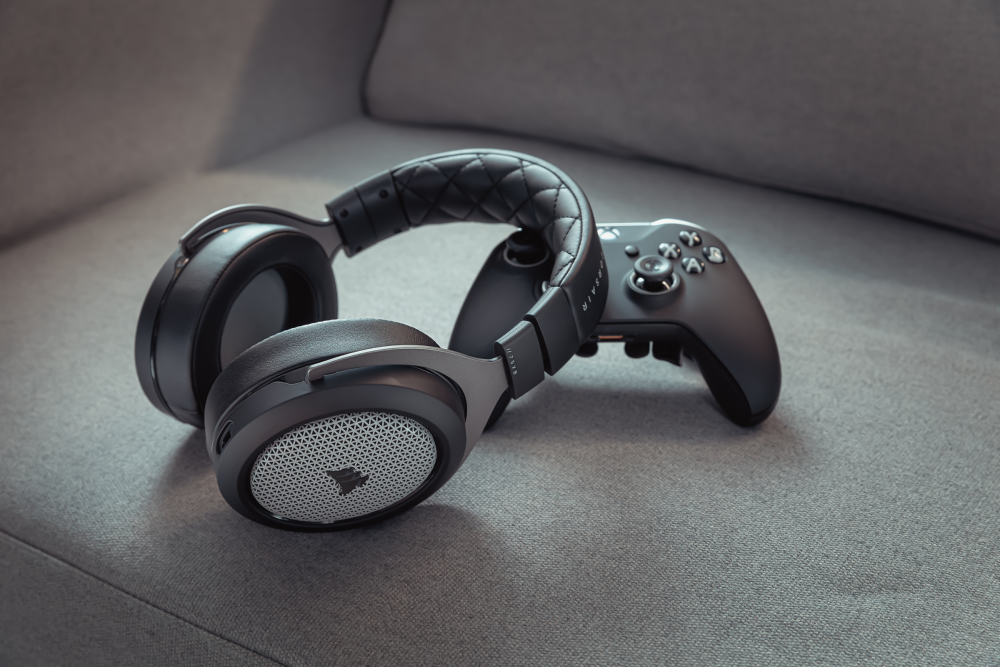 Great sound starts with great audio drivers, which is why the HS75XB WIRELESS utilizes custom-tuned 50mm neodymium drivers with the range to hear everything you need on the battlefield. Coupled with Dolby Atmos spatial audio – a first for a CORSAIR headset – you’ll feel closer to the action than ever before. To ensure clear communication with your teammates, the HS75 XB WIRELESS is equipped with a uni-directional microphone, along with on-ear game audio and chat mix controls so you can easily switch focus from hearing the action to hearing your squad, and vice versa. 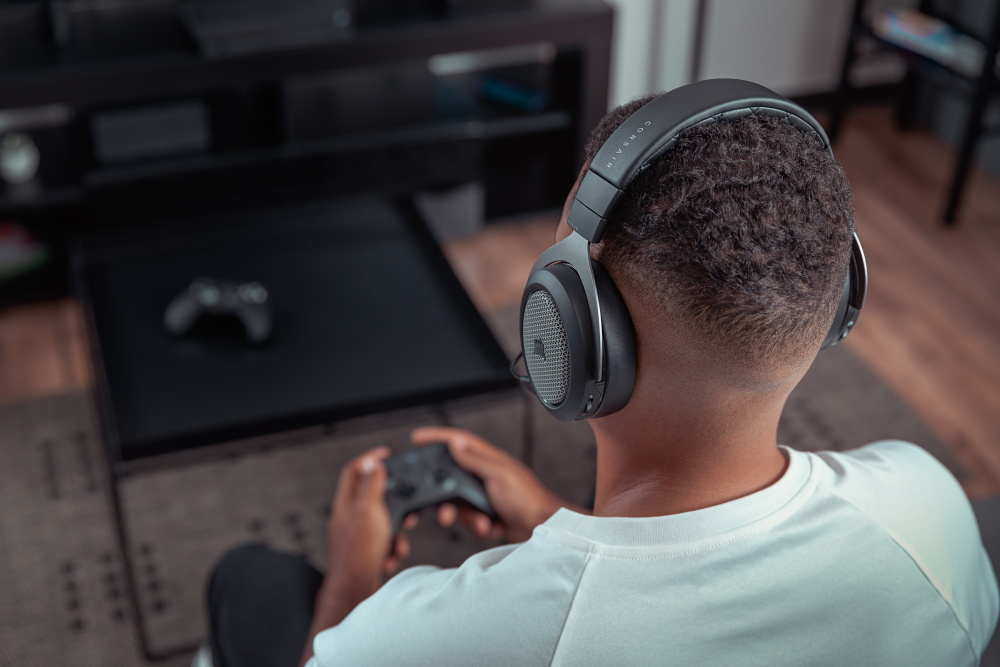 The HS75 XB WIRELESS eliminates the need for a typical wireless receiver thanks to Xbox Wireless technology, pairing directly with your Xbox console or Windows 10 PC (requires Xbox Wireless Adapter for Windows, sold separately) – as easy to set up as pairing a wireless controller. With up to 20 hours of rechargeable battery life and the freedom of up to 30 feet of wireless range, you can play untethered long into the night. 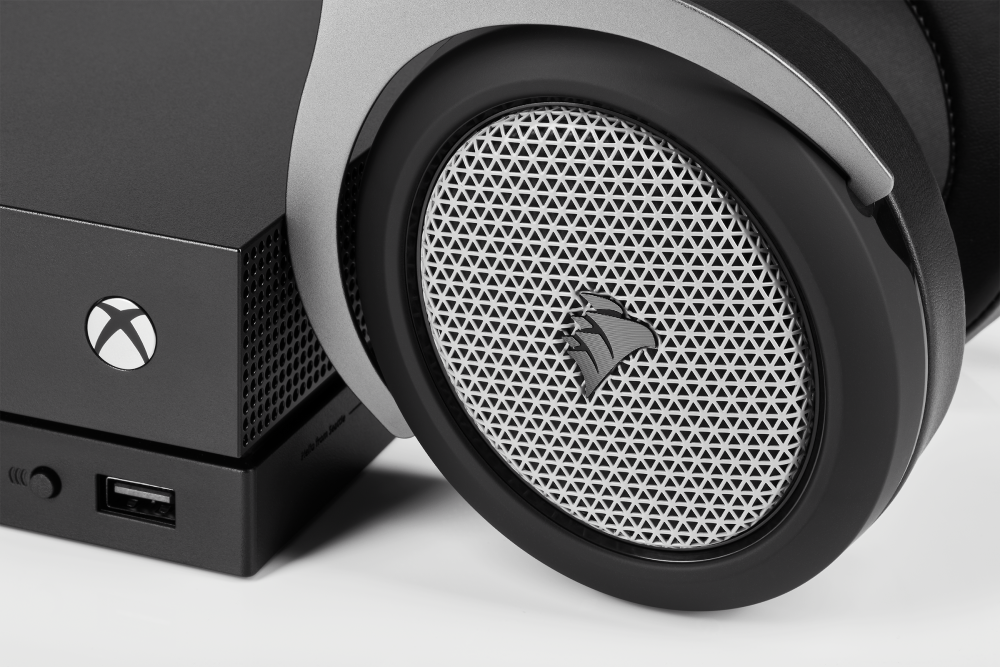 True to its name, the HS75 XB WIRELESS boasts the comfort and build quality that have made HS Series headsets a celebrated favorite of gamers for years. Its adjustable ear cups are fitted with plush leatherette ear pads and viscoelastic memory foam to softly cushion your ears, while its sturdy frame is reinforced with aluminum to ensure lasting durability.

With a massive library of titles available on the Xbox One and the much-anticipated Xbox Series X and Series S on the horizon, now is the time to pick up the HS75XB WIRELESS to complete your console gaming experience.

The CORSAIR HS75 XB WIRELESS is available immediately from the CORSAIR webstore and the CORSAIR worldwide network of authorized retailers and distributors.

The HS75 XB WIRELESS is backed by a two-year warranty, alongside the CORSAIR worldwide customer service and technical support network.

For up-to-date pricing of the HS75 XB WIRELESS, please refer to the CORSAIR website or contact your local CORSAIR sales or PR representative.

For a complete list of all CORSAIR headsets, please visit:

Today’s review presents the latest and fastest DDR5 memory kit in Corsair’s current product stack, Vengeance RGB DDR5-6600. We don’t review Corsair’s products often, and we’re happy we have the chance to take a closer look at the top DDR5 kit from this manufacturer.

Corsair has just launched the HS65 SURROUND gaming headset with Sonarworks SoundID technology. Constructed on a durable but lightweight aluminum framework and soft memory foam encapsulate the 50mm neodymium drivers providing maximum comfort. The HS65 SURROUND features a 3.5mm connector and USB adaptor for compatibility with your PC and nearly all gaming consoles. MSRP is set at $99.99 and is available at the Corsair website and all the usual Corsair vendors. For additional information, continue reading Corsair’s official press release.

Corsair is launching three new mid-tower cases designated the 4000 series. Each new case will feature never before seen innovations like the RapidRoute cable management system. Starting with the 4000D with its minimilistic design, the 4000D Airflow with a full mesh front panel, and the 4000X RGB featuring a tempered glass front panel, Corsair offers plenty to choose from. Here is the official product launch from Corsair.

For those of us who enjoy gaming on consoles as well as PC's, Corsair has just launched it's HS75 XB wireless headset. Marketed as Corsair's first officially licensed headset for Microsoft Xbox, the HS75 XB was designed to be compatible with Xbox One, Xbox Series X, and Series S consoles. But if you happen to be a hardcore PC gamer, you're in luck. The HS75 XB can be connected to a PC by way of an Xbox Wireless Adapter for Windows (sold separately).