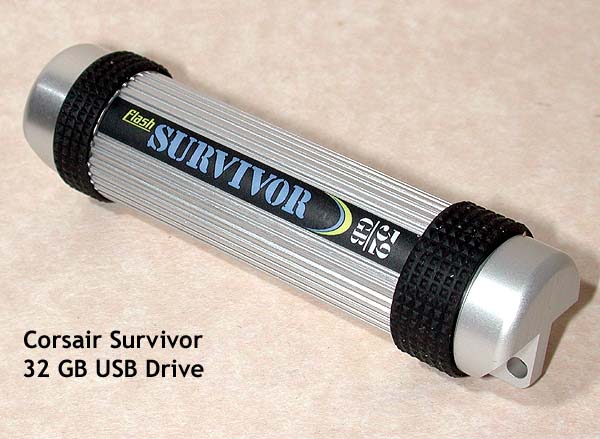 The good guys at Corsair were nice enough to send a sample of the Corsair Flash Survivor ™ to try out. This is a 32 GB (yes – 32GB) pen drive that, aside from its stunning size, is ruggedized in an extremely sturdy, waterproof aluminum case.

Unscrewing the top reveals the drive:

To give an idea of its size, its pictured with a US quarter dollar coin: 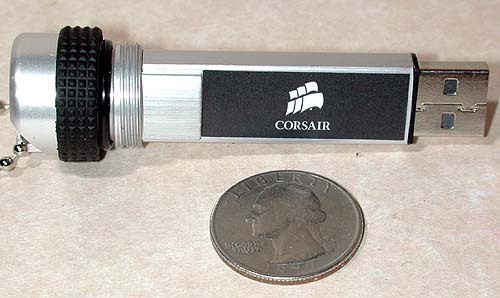 Waterproofing is achieved by using a rubber “O” ring which seals the case tightly when screwed down: 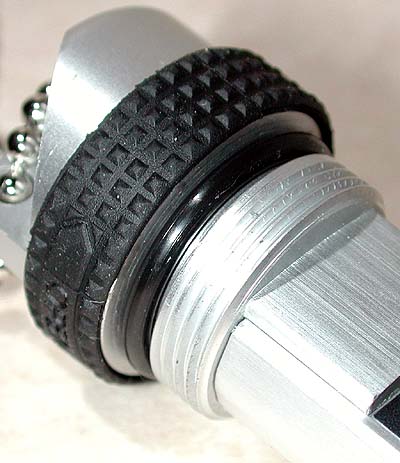 Parts that ship with the drive include a USB extension cable (good for tight-fit situations) and a bead chain with Corsair dogtags: 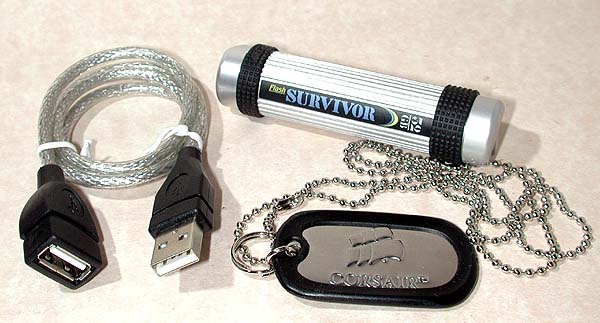 This is a very protected drive – drop it, dunk it, wash it, whatever – it will take a LOT of punishment when sealed; the Survivor is the perfect drive to take on a boat.

There are smaller versions available in 4, 8 and 16 GB flavors. This opens the question of what all this space can be used for. In addition to carrying around large files, I see two other uses:

The first is self explanatory – create your own portable PC using another PC’s hardware. The issue you have to deal with is the availability of a USB bootable PC (older PCs will most likely not do this). Most internet cafes should be OK on this score.

The second gets around the bootable issue, but you still need access to a PC. I have listed a number of links at the end of this article which link to a growing list of portable software apps. All this software will run solely on a USB drive – it does not tie to any specific PC to run. Unless you have some very specific software you need, there are enough software choices to cover the usual productivity, internet and email needs as well as some specialized apps.

I’m not familiar with TrueCrypt and after some searching around found this from TCExplorer:

“TrueCrypt is a free open-source disk encryption software able to create a virtual encrypted disk within a file and mount it as a real disk. The encryption is automatic, real-time (on-the-fly) and transparent. However, a major disadvantage of TrueCrypt is the requirement of administrative privileges on the computers where they are used.

Thus they will not be usable in places such as public libraries and internet cafes, where the computers are typically locked down and the users are given only limited privileges. The purpose of TCExplorer is to overcome this limitation of TrueCrypt by providing an interface, similar to compression and decompression software, where directories and files can be imported and exported easily from TrueCrypt containers.”

There may be other encryption options available – I’d appreciate any comments on this readers may wish to share. 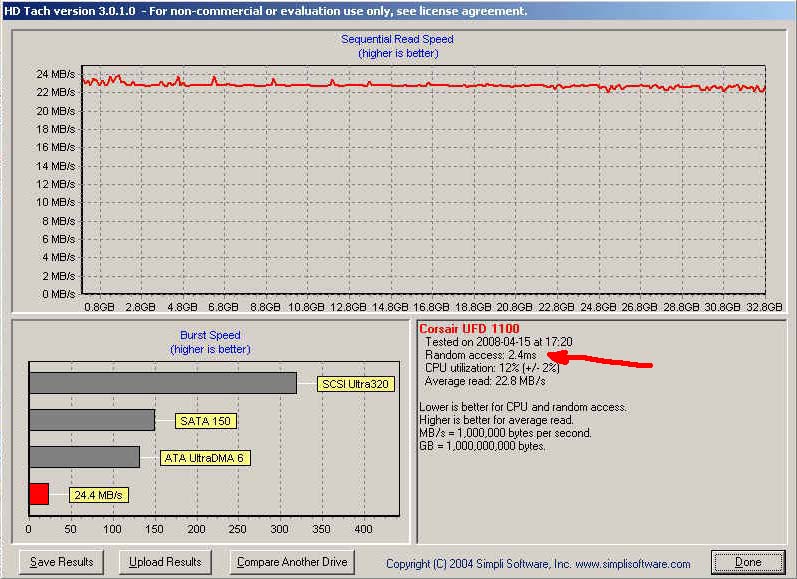 Highlighted in red is the random access speed – 2.4 ms – this is one fast drive! According to Wikipedia “Random access time (seek time) currently ranges from just under 5 ms for high-end server drives, to 15 ms for miniature drives, with the most common desktop type typically being around 9 ms.” Most flash drives are not this fast, although some high-performance drives may be faster.

However Sequential Read Speed is on the slow side – I’ve seen pen drives in the low 30s for the faster drives, so this is not the fastest around. I used SiSandra to benchmark the Survivor against other flash drives over 1 GB:

Corsair’s Voyager series beats out the Survivor, but as file sizes increase, the Survivor starts to pull ahead of the competition. Considering that a drive of the Survivor’s size will most likely be used for fairly large files, it appears very competitive.

Corsair’s Survivor 32 GB flash drive is a must for the road warrior that routinely faces extreme hazards, such as flash floods and rock slides. Its outstanding storage capacity and survivability may seem like overkill to some, but for critical large file portability, a very nice solution.

I can certainly see its use as a bootable travel PC – what better way to take along a PC than in a large, bootable flash drive. The alternative using portable software apps is compelling. I’ve used internet cafes in Europe, South America and the Far East, and if all you need is occasional access and some productivity apps, Crucial’s Survivor looks like a cool way use another PC’s hardware to run your own OS, software and files in privacy.

The following are links to various free portable application software:

Portable apps that every tech needs

The AM2 numbers are in, and, as expected, they are little better than the 939 numbers. When Conroe shows up, the other shoe will drop, and if these numbers are the real deal, the campers will become unhappy. Doesn’t look Read More

I happened to find the August issue of this magazine the other day, so I picked it up and read it. In case you don’t know what I’m talking about, the magazine is Computer Power User and you’ve likely seen Read More

Getting On The Right Bus

DDR2 will be delayed for about a year, or so the Inquirer says. What does that mean? It’s no big deal to those who can provide true dual DDR systems. It hurts those who can’t. That’s good news for Intel Read More