Up to review today is a 2 GB (2 x 1GB) set of DDR2 from Crucial. Peaking under the heat spreader reveals nothing other than Micron fatbody D9 memory chips. Knowing the great track record for these chips, I couldn’t wait to see what they could do. This particular kit is PC2-5300 with rated speeds of 3-3-3-12 which I find strange, as SPD is programmed is as 5-3-3-15, yet when the motherboard sets SPD to 5-5-5-15.

With weirdness aside, let’s take a quick look at the important details of this memory. Crucial rates this memory at 3-3-3-12 and 2.2v, which should mean one thing to overclockers – with more voltage and looser timings, this stuff should fly. That is exactly what it does. Running on a modified ASUS P5WD2 Premium, we have the ability to take the RAM voltage up into the 2.6 – 2.7v range to see how this RAM scales, and that is exactly what we will do; but before we get into overclocking, we’ll look at stock results first.

In order to gauge overall performance for this memory, we ran it though three memory specific benchmarks as well as a 3d test and SuperPi. It is nice to see how the memory bandwidth benchmarks increase, but more important is if the synthetic result can be translated into real world performance, which is where the 3d test and SuperPi come into play.

The memory was tested at 2.3v (maximum stock motherboard provides) for all results except where noted. The processor was kept at its stock rated speeds, and all dividers available were used to overclock the memory. Timings were run as tightly as possible for each divider. Now let’s take a look at some results:

As with all the tests that follow, the memory was run first at SPD settings of DDR667, which equates to a 3:5 divider at 200 FSB. Then for the second test we kept the divider the same and ran the tightest timings that the memory and motherboard would allow for. The only other divider left at that point was 1:2; as you can see, timings needed to be loosened in order to reach this speed, but bandwidth did not suffer.

For this particular test, increasing the timings and running faster memory speeds gave a slight edge to the tighter timings at slower memory speed. Which is right for the application – well, that’s up to the user and the test. Let’s take a look at some more results: 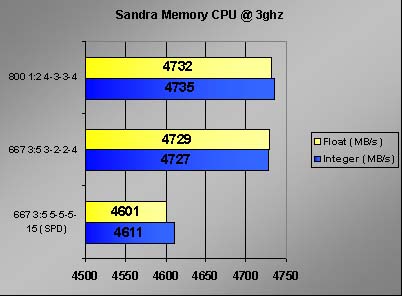 Science Mark also tests memory throughput – it gives us slightly different numbers, but the trend stays the same. Faster memory speeds equate to better performance versus tighter timings. DDR800 has a clear advantage over DDR667 with tight timings – it is starting to look like the best way to increase bandwidth is to loosen the timings and push the memory speed. 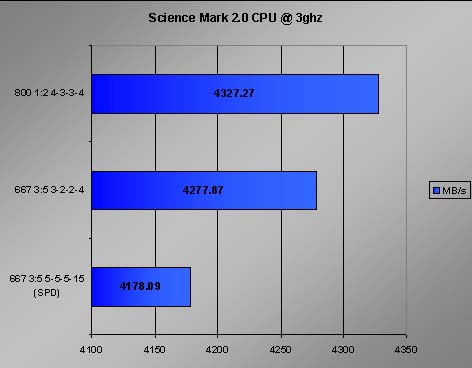 As both of the two benchmarks before this is another synthetic memory benchmark, we will be utilizing the read module of this benchmark to see how speed effects memory read bandwidth. Instead of sounding like a broken record, I’ll let the results speak for themselves, but I will add – the trend continues: 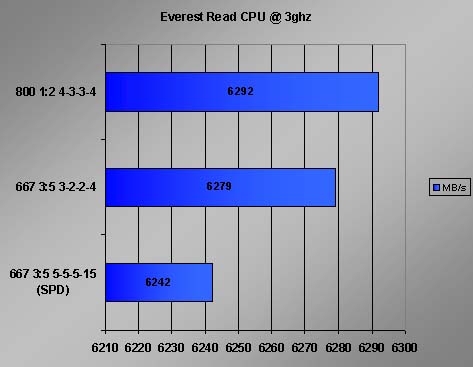 For the 3d test, we will be looking at results from game test 1 of the 3DMark2003 suite. This test was chosen because of the effect that system power has over the benchmark. Unlike the other tests in this suite, it is the most effected by processor clocks and system memory. It also provides us with something tangible – frames per second. As with all the prior results, we are really seeing a big boost – over 15 FPS with DDR800 versus SPD. 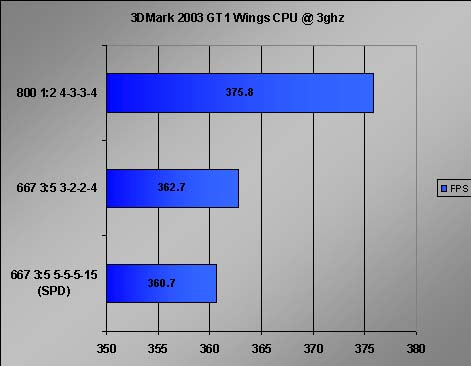 While I never really liked this test, for some reason it just keeps coming back – maybe because of its ability to quickly show how changes you made to your system effect performance, maybe because it takes less than a minute to run, maybe I don’t really hate it at all. Enough with me, onto the results – look at DDR800, almost 4 full seconds shaved versus SPD. That’s good enough for me, wait, no it isn’t…. 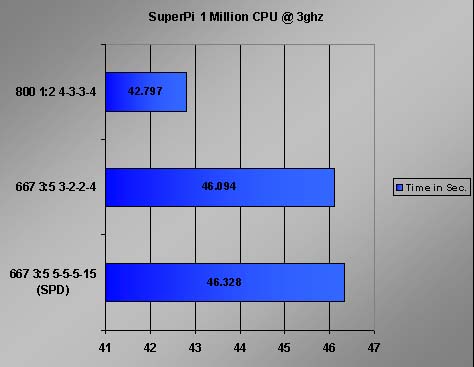 Never being satisfied with stock speeds, I find the need to push most hardware until it crashes, breaks, melts down, or dies out of fear. So with that said, lets see if we can max out some DDR2 here.

Being limited by FSB and dividers at stock clocks, the only logical thing to do was overclock the processor a modest 50%. The nice part about pushing the motherboard past 221 FSB is all the new dividers it unlocks. Some useful, some not so much, as you will soon see.

With a FSB of 300, all of the dividers over and including 1:1 were used. This gives us a memory speed ranges between 600 MHz and 1000 MHz. Timings were kept the same, at 4-3-3-4, for all tests. CAS5 was tested and did not provide any increase in scalability. Now let’s see if we can max out this Crucial DDR2.

Scores for Sandra increase as expected, but we begin to notice a bad trend creeping up. The 4:5 divider is providing some strange results, and they only get worse through the rest of the tests. After some searching on the internet, I was not able to turn up anything conclusive. 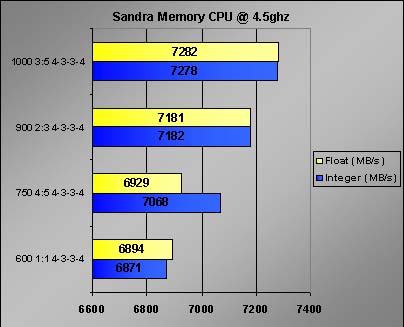 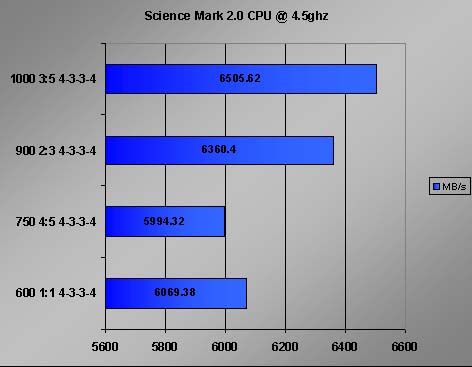 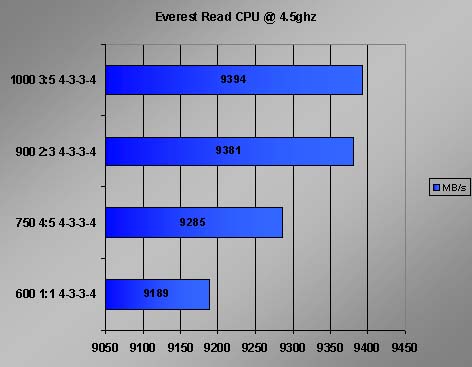 The two following tests were unstable running DDR 1000 even with 2.65v. Increasing the voltage could have stabilized it, but we are already at the point of unsafe voltage for 24/7 operation. Hence the results were left out of the following two tests. 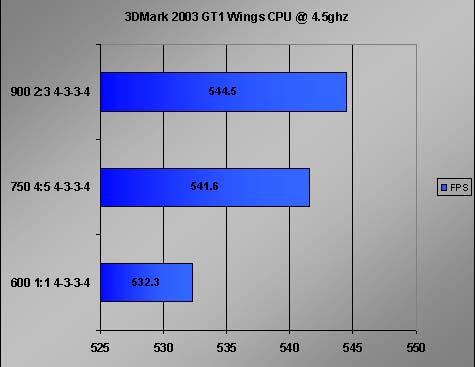 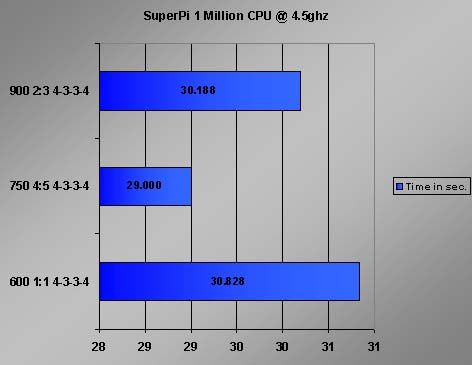 The results speak for themselves:

It does well beyond its rated speeds, is capable of very respectable timings, and doesn’t carry a huge premium price. What more could one ask for? Oh, a warranty: did I forget to mention that Crucial offers a life time warranty?

Pros: This memory is very flexible in the timings that it can run, overclocks very well, and begins to close the speed gap on the faster 2 x 512 MB D9 Kits.

You’ve seen this strong RAM from G.Skill in use before, in our reviews of Intel’s i7 3770K and ASUS’ Maximus V GENE. Now we’ll look at the sticks themselves and find out just what they’re capable of.

Today, XPG announced its first DDR5 memory kit, the XPG Lancer. It is available with or without RGB lighting in frequencies of up to 5200 MT/s and 16GB of capacity. These kits will be available on Amazon and Shop XPG for $399.99 for the RGB version or $349.99 for the non-RGB kits. Below is XPG’s press release.

SUMMARY: Overclockerz PC166 SDRAM does not perform significantly better than Crucial’s PC133. Overclockerz (no relation) was nice enough to send us a sample of their OCZ Performance Series Micro BGA PC-166 (3/2/2) SDRAM to test out. The chips are labeled