SUMMARY: Server motherboards are not for everyone – but what a bargain! 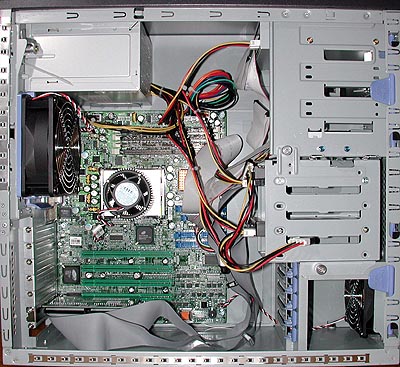 I added the IDE RAID card seen at the bottom.

Ed alerted me to this thread over at Anandtech which describes a deal for a Dell PowerEdge 600SC server with a P4 2.4 GHz for less than $300 (even though this deal is over, you can still get these on Ebay). Now me, I’m a sucker for a bargain. Based on the components in the system, I figured it looked something like this:

A total of $576 at retail – about a 50% savings! Looking further at system features, the following stood out:

The on-board video is adequate but not for serious desktop use; note there is no AGP slot, so you need a good PCI video card. However, the PCI slots are “universal” – this means that most PCI cards (5 volts) will NOT fit these slots (an explanation HERE.) In addition, the on-board IDE channels are ATA 33 only and the board supports PC2100.

I think the reason you see a number of these on Ebay is that some who bought did not appreciate the “nuances” listed here – this is NOT a gaming system.

In addition, there are NO overclocking options in BIOS – the CPU, FSB, RAM and voltages run at spec and that’s it – BIOS options are limited at best. This is, after all, a server built for reliability first and foremost, not for overclocking.

For my use in editing the site, I look for “bulletproof” – no problems needed here. I use RAID 1 (mirror) for this reason – should a drive go bad, I have a hot backup. So for what I want, the Dell looked like a good long-term choice. This is the first system I would own that is “proprietary” – it’s been “roll-your-own” since day one.

So I bought one for a net price (with tax) of $290 delivered. As my first proprietary system purchase, I thought it would be interesting to share some of the ways Dell (and others) try to “limit” your upgrade options to Dell products.

One thing I noticed right away were the proprietary connectors used for the system’s fans: 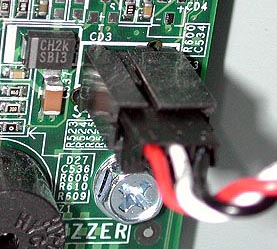 This is not the standard plug you’ve all seen – in fact, the Dell plug is wired differently: 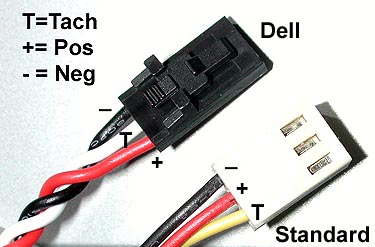 Dell puts the tach wire in the center, whereas the standard plug has it off to one side. Even if you forced a standard plug onto the pins, it would not work. The fix is relatively easy – cut the Dell plug from the fan and wire it to the replacement – it works, since I’ve done it without any problems.

The 120mm fan is located at the back 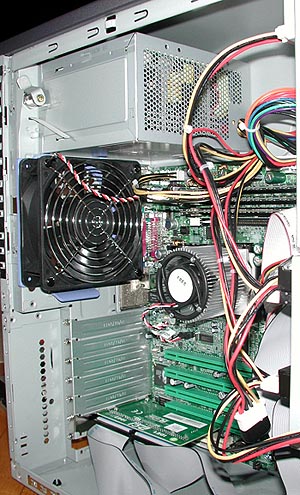 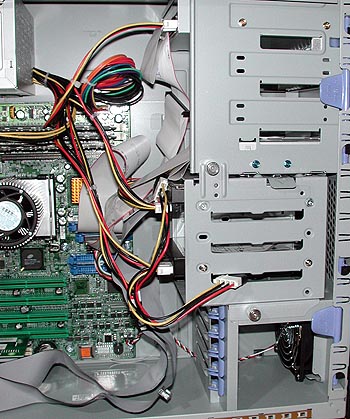 As with most cases, airflow into the case is somewhat restricted by the plastic case front – I would open it up with a 5″ hole for max airflow.

One other thing I noticed was that the power supply plug is missing one wire: 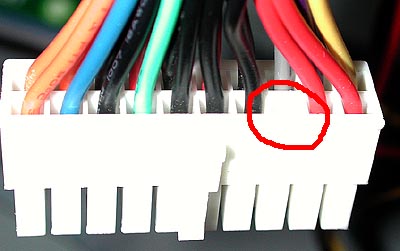 This is the -5 volt wire. On many Dell (and other) systems, power supplies are not ATX standard, even though the plug might fit. The risk you run in replacing a Dell PS with a standard ATX is frying the motherboard. I’ll check this further, but for now the Dell PS stays (I should note that it is VERY quiet).
{mospagebreak}

Finally, a close look at the heatsink (the loudest system noisemaker) revealed a cheapo all-aluminum unit: 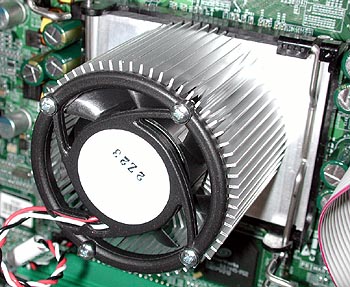 The base was absolutely terrible – I think it must have been polished with a file. Totally not impressed with it.

The system is noisy though – at least, compared to what I’m used to (all PCs watercooled). I replaced the CPU fan with a couple of aircooled heatsinks with limited success at substantially reducing noise. For me, the only option I had was to watercool the server.

After thinking about it a while, I decided to use a Koolance case (the original one) that I modified with an Eheim 1046 waterpump (a repair – the internal pump died after about a year). I used Koolance’s CPU 200G for the waterblock. The server now looks like this: 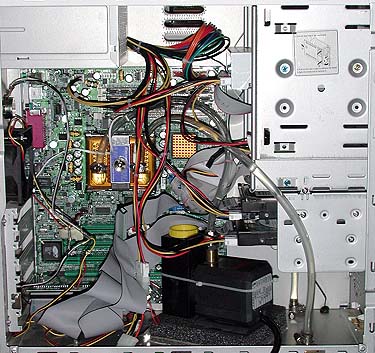 Noise has been substantially reduced, although not as quiet as Swiftech’s Q-Power case. The Swiftech uses Mechatronics 120mm fans exclusively and the noise level is barely noticeable. After I get things totally squared away, I’ll move the Dell board into the Swiftech case – more breathing room and less noise.

As I indicated, this is a server, not a hot gaming system. One area where the Dell will definitely fall short is hard drive performance. I did not use the embedded IDE ATA33 slots but opted for Promise’s IDE TX RAID card instead. This is located in PCI slot 2 so it boots as the C drive. I used SiSoft Sandra to give some perspective on performance: 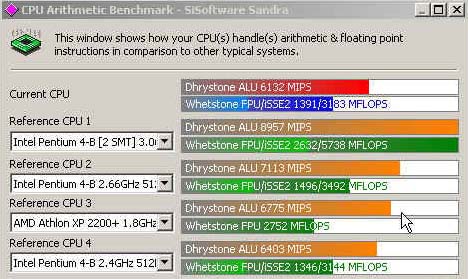 No surprise with CPU. MultiMedia should be a different story: 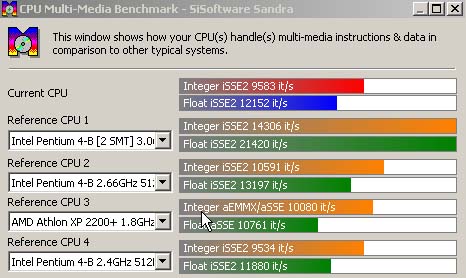 Remember – on-board video. Don’t even THINK of trying 3D. I find it tolerable, but will replace it shortly with a Matrox G450 PCI card.

The Memory scores are low for reasons I indicated above: 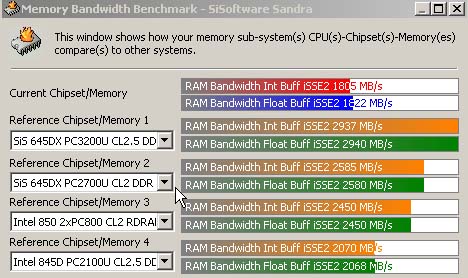 Finally, the hard drive benches are not at all bad:

This is due to using the RAID card (mirror) rather than the on-board IDE ATA 33 slots (BTW: Unless you’re doing a LOT of file swapping, these will be OK for “normal” use).

All told, for what I need and the price paid, the Dell server is going to work out fine. I don’t see a need to upgrade the “work” machine for probably three years; the “fun” machine is a different story!

Proprietary machines use a number of methods to keep you buying from them – I’ve indicated some here. The lack of upgrade options and flexibility on many proprietary PCs is something I see in emails every day. If you have not “rolled you own” yet, think about it – could save you money long term.

Warning: Neither Lee nor Overclockers.com endorse this modification; at a minimum, it will void your Dell warranty.

Lee emailed me about how he swapped out his Dell PS – this is the first I’ve seen of someone who replaced the Dell Power Supply in the 600SC with a standard ATX PS: 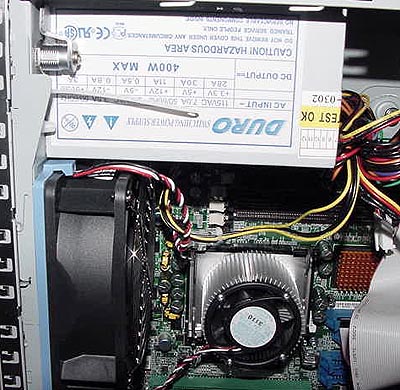 This is a straight swap – Lee “did not touch a thing – plugged in and turned on.”

Many wrote in and noted that in many Dell systems, the PS IS proprietary and a straight swap will kill the motherboard:

“You might want to warn your readers to check the pins BEFORE they swap PSU’s. I work for an Authorized Dell Service Center. A while back, Dell began to change pins around on the ATX connector. This resulted in either fried mobo’s or fried PSU’s, depending on if you put a Dell PSU in a Standard PC or Standard PSU in a Dell PC.”

There is an adapter available
HERE.

Before I would try a swap, I’d check the pins and manually check the lines on each PS before a swap – you never know! If you do a 600SC PS swap, drop me a line and tell me how it went.

Many Thanks to Lee and all who wrote in!
{mospagebreak}

In my quest for a low-noise server, I moved the Dell 600SC from its case to a Koolance case – the one with the “watersink” in its base. I think this is still the quietest watercooling solution around and I’m sorry that Koolance discontinued this approach.

The major problem that Koolance had with it (I think) is that the pumps were failing too quickly (mine failed within a year, my son’s within 9 months). Since the pump was inside the base, it’s a major job to repair it. The fix was to dump the pump and use an in-line solution: 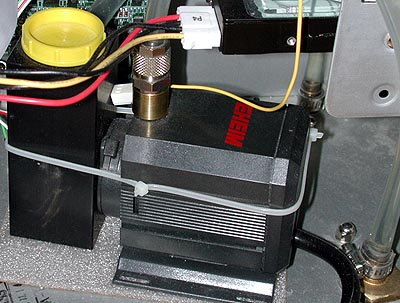 What I did was use the Eheim 1046 from Innovatek’s Water Cooling Kit. This has a nifty little reservoir attached to it, making filling, bleeding and maintaining a snap. Plus it’s a LOT more powerful than what it replaced.

However, I still found the three 40mm cooling fans in the base to be on the loud side (this is all relative – compared to any other aircooled solution, it’s virtually silent). What I wound up doing was to remove the Koolance controller and replace it with a PC Mods Rheo Bus: 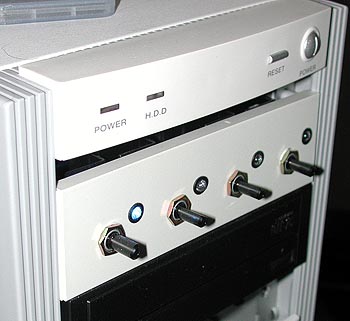 With a PIII, I found that I could keep at very cool with just one fan continuously running at 5 volts – the other fans never kicked in. With a P4 2.4, I reasoned that I’ll wire it up to run two fans continuously at a setting which produces no noise. This was easily accomplished with the Rheo Bus.

Right now I’m monitoring temps with a Radio Shack indoor-outdoor thermometer placed on the waterblock – it never gets more than 2 C over ambient.

Alex at Motherboard Monitor is trying to get it to work with the ServerWorks motherboard so I can read out the P4 diode directly (so far no joy) – if anyone has access to documentation on this board, please drop me a line; it would be great to have this super utility available for monitoring purposes.

Finally, I wanted to cool the Northbridge passive heatsink, but found it was too small to fit a 40mm fan. After scrounging around, I found a bracket from a Zallman heatsink: 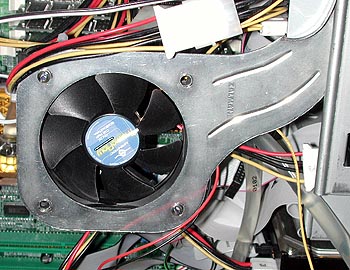 I zip-tied this to the case and fitted a Vantec thermistor controlled fan to it – it’s virtually silent and moves enough air onto the motherboard to keep the Northbridge’s heatsink lukewarm. I run the case open, but if I use the side, I’ll cut an opening for the fan.

The Dell power supply is virtually silent – at most, air from it feels lukewarm.

Overall, the 600SC I now have is about as silent as I could wish – with a radio playing softly in the background, you can’t hear it (maybe a slight HD whine, but that’s it).

AMD lost money again last quarter, but that was solely due to their flash memory division doing horribly. Profits in the CPU industry went up a little bit, but this is something that ought to happen as production shifts from

Intel provided more details about the Nehalem-generation of processors and a few about its successor, Sandy Bridge, but that’s probably old news to you. You may not know about this estimate of Nehalem performance: 20-30% faster than a Penryn clock-for-clock.

Let’s take a quick look at Tualatin. Essentially, it’s a PIII dragged through the ringer one more time in .13 micron. It’s really meant to eventually become Celeron III (though cache will no doubt be sliced a bit for that