There’s a lot of press lately about netbooks using Intel’s N280 Atom CPU. Reports indicate that there is a noticeable performance improvement over the N270, most likely due in part to the better graphics chipset that mates with it. As nice as all of this is, I think the real news is going to show up some time later this year – netbooks with Intel’s dual core Atom – the 330.

While Intel discourages its use in netbooks, competitive pressures to one-up the competition would seem to make a dual core netbook all but inevitable. With costs per unit about the same, the performance boost makes it a no-brainer. A dual core netbook would really blur the distinction between netbooks and notebooks.

A quick look at the Atom 280 vs Atom 330 features set highlights the key differences: 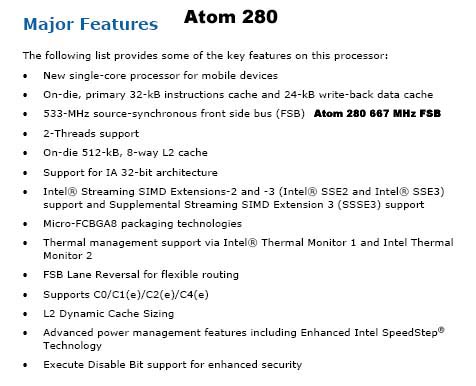 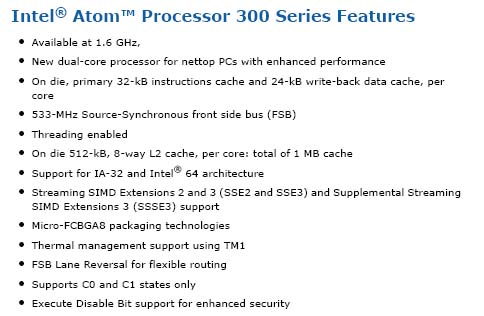 The major differences are the two cores and the larger cache – double for the 330 to 1 MB – a sure performance booster. Note that the 280 features a 667 MHz FSB while the 330 currently sports a 533 MHz FSB. The 330 also takes more power – 8 watts vs 2 for the 200 series. While it does not sound like much, it translates to beefier components on the motherboard which means higher costs.

However, while costs may be higher, manufacturers are playing the “less money per unit, lots more units” game. In this depressed business environment, you go with the volume. It is also not a stretch to see a market for a “netbook+” with a slight price premium – corporate buyers might jump at the prospect of a netbook capable of running full-blown Windows 7.

There is a good review of the Atom 330 on an Intel motherboard which gives an some perspective on the difference to the 270, concluding:

“The fact of the matter is that except for 3D games, large databases, and very compute-intensive applications such as MPEG2/4/H.264 encoding, an Atom 330 will more than do the job for a regular desktop user. If Intel did not limit expansion to a sole PCI slot, adding a decent GPU would even enable usable gaming.”

I think regardless of Intel’s thoughts on the Atom 330, it’s only a matter of time before one of the majors takes the netbook to the next level. There is Atom 330 Nettop on the market, so the netbook version may not be far off. Considering that the Atom 280 is just starting to show up, the typical abbreviated hardware cycle argues in favor of a late 2009 dual core netbook.

I would love to see at least a 10″ screen with 2 GB RAM for under $500 – that would be a potent road warrior machine.

For those of you with Xeons, the IWill DP533’s claim to fame has been its 133 MHz forced FSB jumper, which offers a way to overclock Xeons with a 100 MHz FSB. On the other hand, there is another, universal