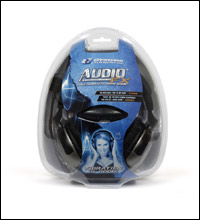 For any gamer, sound is an extremely important aspect to whatever game you might be playing. Good sound is imperative to successfully complete their objective, whether it’s locating that sniper who just took out your teammate or knowing to get out of the way of a jeep which was about to run you over, you’re going to need to hear everything that is going on around you. However, in order to hear good sound you’ll need good hardware, so I’ll be checking out the AudioFX force feedback headphones by eDimensional.

The headphones out of the package – a CD case has been placed beside them to give you an idea of how big they are: 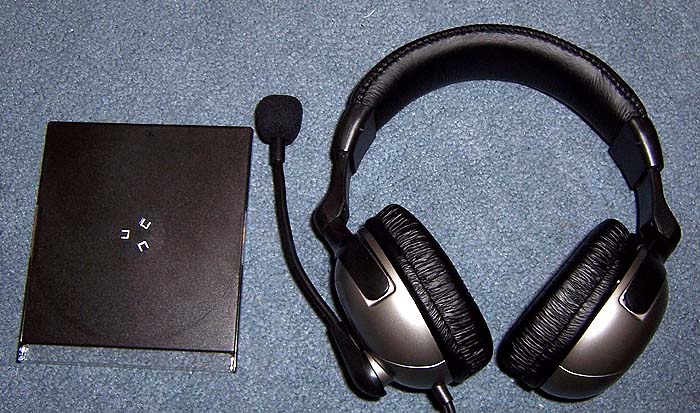 Overall the shape and size of the headphones are good. The unit (minus cord) weighs about 290 grams, so it’s not heavy enough to be uncomfortable but they’ve still have a good weight to them. The left and right headphone units can adjust to fit any size head, which is a standard but useful feature. I really like the cushioned ear pieces because they are very comfortable – the headphones can easily be worn hours on end without any discomfort.

The AudioFX also boast a 9 foot cable with control dials located a little more than a foot down from the headset. The long cable is a very nice feature, especially if you like having all your wires neatly routed behind your computer desk or even if you bring it to LAN parties, where the wiring situation can get a bit crazy at times.

Located at the end of the cord are the USB, speaker and microphone plugs. The USB is used only as a power source for the force feedback which I will discuss later. 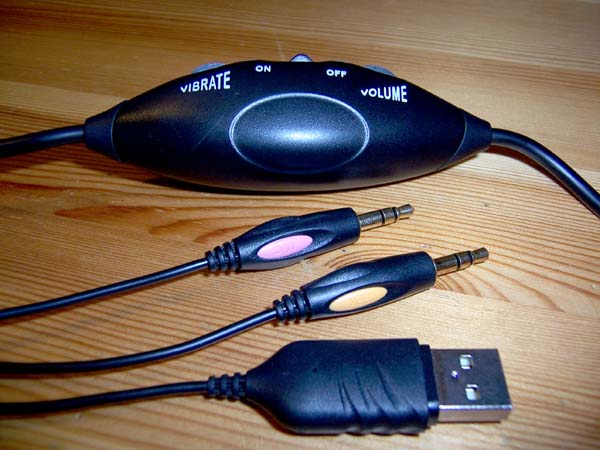 The vibration and volume control located on the cord

The first thing I noticed about the AudioFX headphones is the microphone attached to the left side of the unit. This is extremely useful and a must for gaming headphones – team communication is key to winning the game. Unfortunately, if you like the microphone on the right side you are out of luck unless you want turn the unit around, thus playing left and right audio on the wrong sides.

The microphone itself is attached to the unit by a flexible arm that also rotates. The microphone quality is definitely above average. I’ve used mics that are good and others that are crap – this one is certainly good. I did encounter problems with the microphone not functioning due to the arm being bent too much, so just a fair warning that bending the arm at too much of an angle can damage it.

The sound quality is another high point – compared to other headphones I’ve used, it’s excellent. The most inaudible noises such as footsteps and reload sounds are dead giveaways to where your enemies are. I really had no problems with the sound – it’s very clear and can really give you a tactical advantage in games. Though the force feedback did lower the quality slightly when it was enabled, I’ll get more into that next.

Another very interesting feature is the force feedback; this is usually implemented in game controllers and steering wheels, so putting it in headphones is pretty unique. What drives the force feedback is a bass amplifier – when a deep sound is played the headset “rumbles”, giving you a feeling that you are in the game. According to the eDimensional website this applies to sounds below 20 – 25 Hz. Instead of merely seeing a grenade explode you can feel it too. This really puts you into the game by making you feel as if you’re in the battlefield or sitting in the driver seat of an F1 race car.

Now the force feedback feature is awesome in games but I didn’t care for it when watching movies or listening to music. This pretty much depends on what you’re watching/listening to, though. For example, if you’re listening to something with a good hard beat (rap/techno), then the force feedback makes it sound and feel very cool; but when listening to metal/rock, the extra bass ruined it because it was simply too dominant in the song.

Also when the force feedback is enabled it seems to slightly lower the sound quality; when no sound is playing, a buzzing noise can be heard (this is not audible when sound is playing, though). When watching movies, something with lots of gunfire and explosions makes you feel as though you’re right there in the set, but something with more dialogue didn’t really sound so great. Don’t get me wrong – the quality is good but if you’re an audiophile, you might want to disable force feedback when watching movies because you will notice the difference. According to the eDimensional website, this is normal.

As stated above this feature can be switched On/Off on the fly simply by flipping a switch located on the volume control piece; the vibration intensity can also be adjusted using a small dial on the control piece.

There is one more interesting feature and that is the three LED lights on each side of the headphones. These will light up depending on the volume of the sounds that are playing. This is a nice addition and definitely looks good whether you’re just playing with some friends or competing at a LAN tournament – these headphones are most certainly an eye catcher. 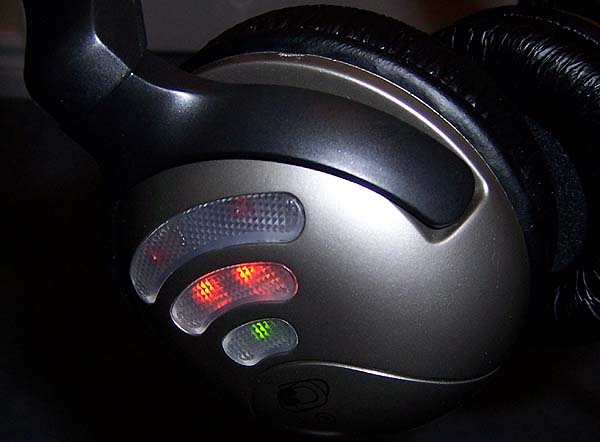 The green, orange and red LED’s located on the sides of the headphones
Conclusion

The AudioFX headphones are definitely a worthy purchase. The eDimensional website puts these at $49.95 USD, which is a pretty good price for what you get: great audio quality, force feedback, microphone and cool lights. Though I did have problems with the microphone cutting out, I am at fault for bending the flexible arm too much. I do believe that they could’ve improved the arm design and made it more durable.

Other than that, I am very pleased at the quality displayed by the rest of the unit; for the comfort and audio quality you get, it’s a very good purchase.

The title of the Digitimes article is a bit drawn out: “Commentary: What Apple’s Snow Leopard announcement tells us about its future plans for Intel Nehalem.” It really should have been called, “Can Apple whack Microsoft with Nehalem?” This is