We’ve recently reviewed several NVIDIA GTX 980 based graphics cards here at Overclockers, and we came away impressed with their low power consumption, great performance, and “bang-for-the-buck” pricing. Today, we’re going to drop it down a notch and have a look at our first GTX 970. More specifically, the EVGA GTX 970 FTW. The factory overclock EVGA applied to the GTX 970 FTW is one of the highest we’ve ever seen, which leads us to believe EVGA is extremely confident in the headroom that’s available on these Maxwell 2 GPUs. EVGA also outfitted the GTX 970 FTW with their newest ACX 2.0 cooler, which performed terrifically when we reviewed the GTX 980 SC a while back. Let’s get going and find out what EVGA was able to accomplish with the GTX 970 FTW!

Looking at the specifications below, we can get a feel for the hefty factory applied overclock. The GTX 970 reference design cards are clocked at 1050 MHz base/1178 MHz boost, which means we have a 166 MHz base/189 MHz boost clock speed increase. Pretty impressive.

All of the latest NVIDIA technologies are at your disposal, including support for G-Sync and DirectX 12.

A quick look at GPU-Z gives us additional specifications worth noting. At the heart of the GTX 970 FTW is the NVIDIA GM204 Maxwell 2 GPU. The CUDA core count comes in at 1664, and the ROPs and TMUs show 64 and 104 respectively. The 4 GB of GDDR5 memory is clocked at 1753 MHz (7012 effective) and sits on a 256-bit interface. The base and boost clock speeds are confirmed as well, but we know from experience the actual boost clock will be higher than what’s reported here. In fact, we saw the actual boost clock settle in at 1392 MHz with an occasional spike to 1404 MHz. 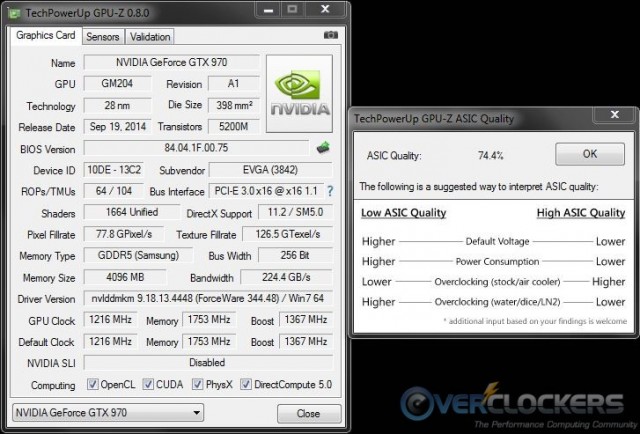 Other than the stout factory overclock applied to the GTX 970 FTW, the other major feature is the ACX 2.0 cooler. The ACX 2.0 has several enhancements over its predecessor, which include two more swept design fan blades, a redesigned fan motor, and better magnets. EVGA touts the ACX 2.0 as being longer lasting, quieter, and capable of better performance when compared to their own ACX 1.0 and competitor brands. One of the best advantages the ACX 2.0 has over the competition is its low power consumption. Why is this important? The wattage the cooling fans use is calculated in the overall TDP that’s available, which is 145 watts in this case. The less wattage the fans use could equate to more overclocking headroom before the 110% power target limit is reached. Also worth noting is that the ACX 2.0’s fans will not begin spinning until the GPU temperature reaches roughly 60 °C.

The retail package does a good job of explaining what you’re buying into. As you work your way around the box, you’ll find a list of features, specifications, and some of the benefits of choosing this card over competitor offerings.

EVGA uses a plastic clam-shell to house and protect the GTX 970 FTW. The accessories sit on top of the clam-shell and include lots of documentation, a wall poster, the driver/utility CD, a case badge, power adapter cables, and a DVI to VGA adapter.

Before taking an up-close look at the GTX 970 FTW, here are several pictures taken from various angles. As you can see, the GTX 970 FTW is comprised of a mostly black color scheme, except for a spattering of blue near the center of the fan shroud.

Looking at the I/O area, EVGA opted out of the reference design’s three DisplayPort connections and chose to revert back to a single DisplayPort, one HDMI, and two DVI connections. This still allows you to use four concurrent monitors, but takes away the ability to use a tri-monitor G-Sync surround setup.

The GTX 970 FTW requires dual 6-pin PCI-E power leads, which should provide an abundant amount of power for a 145 watt card such as this. Along the top of the card, two SLI bridge connections are found for up to tri-SLI support.

Once the ACX 2.0 cooler is removed, we can see the TIM was appropriately applied and making good contact with the GPU.

There are four heatpipes that travel the distance of the fin array and make direct contact with the top of the cooler’s base plate. There is no direct contact with the MOSFETs, VRM, or memory; but they should receive adequate air flow from the fans. The two 90 mm fans have 11 swept design blades that are said to run quieter and provide more air flow through the heatsink than the previous ACX 1.0. The fan motor has been upgraded to include a 3-phase/6-slot design, two ball bearings, and enhanced magnet strength. Below is a series of pictures showing the ACX 2.0, which gives you a good look at its design.

Looking closer at the PCB, we can see the same 4-phase GPU power design used on the reference design cards. However, EVGA extended the PCB at the rear area, which is where you’ll find the two power phases dedicated to the memory. There is a metal stiffening plate attached to the top of the extended PCB area to keep the card from flexing.

The GTX 970 FTW’s GPU power phases are controlled by an ON Semiconductor NCP81174 VRM module. EVGA added a second VRM (not pictured) found at the back of the card to provide additional power, which is an improvement over the reference design cards. Also found at the back of the card is an extremely small triple-BIOS switch that will require a very small pointed device of some sort to actually throw the switches.

Just as we saw on the EVGA GTX 980 SC, the 4 GB of memory comes from Samsung’s K4G41325FC-HC28 GDDR5 modules. Our previous experience with these memory modules resulted in excellent overclocking headroom, so we’ll check that out this time around too. The last picture below is of the NVIDIA GM204-200-A1 GPU.

We’ve got a good selection of comparison samples, which includes a R9 290, R9 290X, GTX 780, and GTX 980. We’ll adhere to the Overclockers.com GPU test procedure that’s been in place since the Haswell platform was released. If you’re not yet familiar with our methodology, then click on the link provided for additional information. For quick reference, below is the down and dirty version of what we do.

For a desktop GPU software utility, EVGA offers up PrecisionX 16. Everything you need to overclock, monitor, and control the fans is readily available and easy to use. Depending on the actual graphics card installed, PrecisionX 16 has the ability to marginally manipulate the GPU core voltage. GPU core and memory speed can also be adjusted using the provided offset method. Fan speeds can be adjusted by simply using the slider on the left side of the main window or by accessing the fan curve option to base fan speed off of the GPU temperature. There are many other tweaks you can make with PrecisionX 16, so it’s definitely worth checking out.

PrecisionX 16 was used to achieve a 24/7 stable overclock of 1300 MHz GPU and 1900 MHz (7600 MHz effective). That’s an additional 86 MHz over the already stout factory overclock. At that setting, the GPU boost clock was 1451 MHz. Actual boost clock came in right around 1468 MHz with occasional spikes as high as 1479 MHz. A 24/7 stable overclock means the settings are able to complete all our benchmarks with no stuttering, artifacts, or any other abnormalities. We’ll see if there is anything left during the “Pushing the Limits” section of the review; but for now, we’ll use this to obtain our overclocked benchmark scores.

We ran five of our most popular game titles through our tri-monitor Surround setup at 5760×1080 resolution. Keep in mind, we keep all the game settings maxed out for our Surround/Eyefinity testing with each of the comparison samples at their stock settings. All of the higher-end cards tested here have 3 GB or more of onboard memory, which is why we see little difference between all the comparison samples. The GTX 970 FTW fell pretty much in line, just as it did in the single monitor testing above; and it managed to pull 30+ FPS in three of the five benchmarks.

Power consumption numbers are quite astounding when you think back to previous generation graphics cards. With the GTX 970 FTW overclocked, the highest total system power draw was a mere 310 watts. A quality 500 ~ 550 watt power supply would give you plenty of headroom for overclocking both the graphics card and CPU. That’s pretty impressive when you consider the cost saving benefits over having to buy a high wattage PSU. Good stuff all round!

Just as impressive as the power efficiency numbers is the performance of the ACX 2.0 cooler. Right on queue, the fans fired up near 60 °C and were almost inaudible when left at the auto setting. With the card overclocked and the fans set to their auto setting, we were able to keep the GPU temperature under 80 °C. If you don’t mind a little noise, setting the fan speeds to 100% should keep the GPU temperature well below the 60 °C mark. There really is no reason to put up with much noise because with the fans left on the auto setting, the temperatures will be kept in check nicely.

There wasn’t a whole lot of headroom left past the overclock we already had in place, but we were able to get an additional 25 MHz on the GPU and 50 MHz on the memory. This landed us at 1325 MHz base/1476 MHz boost for the GPU and 1950 MHz (7800 MHz effective) on the memory side. At this point, we were up against the 110% power target limit, and anything higher resulted in GPU core speed fluctuations. Still a good result though, and our 3DMark Fire Strike score increased another 129 points.

The EVGA GTX 970 FTW proved to be a great performing card that has many features gaming enthusiasts look for. Low power consumption, excellent cooling from the ACX 2.0, a massive factory applied overclock, and performance that puts it ahead of the AMD R9 290X in most cases all add up to the GTX 970 FTW being a serious contender for your next graphics card purchase.

The EVGA GTX 970 FTW currently sells for $379.99 at Newegg and the EVGA store. When you consider it’s the highest out-of-box overclocked GTX 970 there is, that’s an easily acceptable price. The price is even more justified when you still find some AMD R9 290X offerings selling for more than this card.

If you’ve been looking to jump into a Maxwell 2 graphics card that offers great performance at an affordable price, the EVGA GTX 970 FTW might be just what you’ve been waiting for. It’s an easy call this time around… Overclockers approved!

With thanks going to EVGA, I have the X299 Dark motherboard on the test bench today. This is the only X299 motherboard I am aware of that incorporates active cooling on the VRM section, PCH, and M.2 slots. Read More

Today, we’ll be looking at a mini-tower offering from Lian Li, the PC-V650. Don’t let the mini-tower designation fool you into thinking this is a cramped design that offers little in the way configuration options. As you’ll see, there are ample opportunities to install a good amount of components for PC or HTPC use. So, let’s dive in and see all that the Lian Li PC-V650 has to offer! Read More

Always looking to cater to the computer enthusiasts, EVGA showed us a glimpse of what 2014 holds in store for their new product offerings. EVGA will be getting into the gaming mouse business, and will also offer braided cable assemblies and kits for their PSU line. Let’s have a look at what EVGA was showing off at CES 2014! Read More