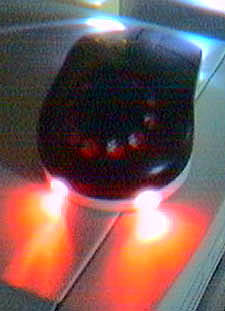 So, you’ve seen the headline, looked at the pic, and don’t quite see the point. I agree! I was really bored this weekend, and on the forum there was some talk about mouse mods.

The original “Rottaflekti” was mentioned, where some person in Finland modified a mouse to incorporate a fan to relieve sweaty “frag-fest” hands. So why not make one? And I always have a load of different LEDs around, so I had to do something with them too. Let’s start!

This is the bottom-half of the mouse chosen for this “operation”: 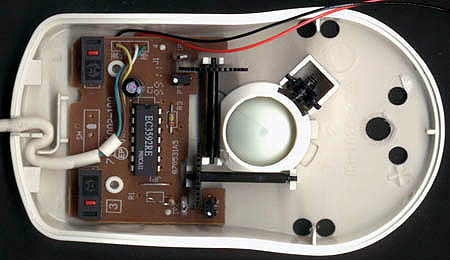 As you can see, I’ve already started. I’ve drilled some holes for air intake, removed some material to get more room and soldered wires tapping into the +5V from the PS2 port. To find the +5V source, use a multimeter and search around the board for a source.

By carefully looking at the traces on the PCB, it is also possible to see “what goes where” and find the 5V. Whatever kind of mouse you have (serial, ps2, usb), the logic still requires 5V, so you should find it somewhere. If you have an old serial mouse with all wires into the mouse, it’s possible to get 12V as well.

On the top half I’ve also done a couple of things: 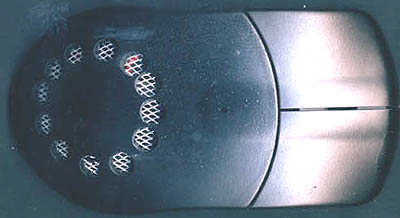 For starters, I drilled a series of holes for the fan. They are somewhat large to get good airflow, but this also means there is a need for some sort of grill. So I cut up some wire mesh I had and glued it to the inside. This was after giving it all a good coat of paint. The finish is a lot better then this picture shows.

And on the inside of this half? The fan! 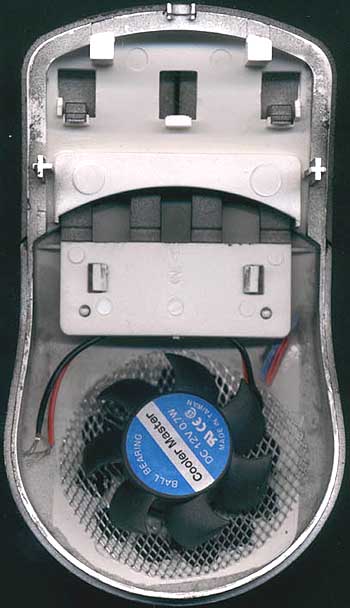 Here you see the fan and the mesh. The fan is just a regular 40mm fan with the “frame” removed. It’s rated at 12V, but runs OK at 5V. I tested several fans because not every fan would spin at such a low voltage. One fan that really surprised me was the fan from a BLORB that gave a good breeze at just 3V! Unfortunately it was about 1 mm too tall, so it touched the ball.

It’s superglued to the mouse. The red and blue stuff seen on the right side of the picture is part of some wires I superglued down as I tested the BLORB fan. It was not as easy to remove as to glue.

All right, top-half finished! Let’s see what have happened to the bottom-half, shall we?

Let there be light! 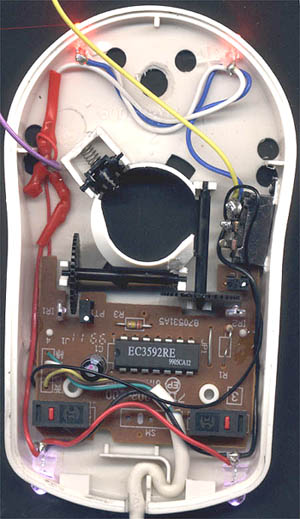 I’m still impressed my scanner handled this with the LEDs turned on.

Anyway, there have been some changes here since last time. First the LEDs: Both sets of LEDs (white and red) are connected in parallel. The negative lead goes to a switch (to turn everything on/off) and the positive to a resistor, seen in the shrink tubing on the left.

The resistor value was calculated using the calculator on HERE. They could be connected both serial or single, but this was the first solution that popped into my head. Just remember to double the amp drawn for parallel resistor calculating (or the forward voltage for serial).

Then I put the LEDs in their holes together with a dab of superglue and routed the wires as best I could.

Everything is ready for the fan – that’s what those spare wires (yellow and purple) are for. So let’s close her up! This wasn’t easy, as the wires kept interfering with the fan or the ball mechanism. But some superglue fixed this as well.

All done, two shots showing the LEDs and the fan grill (taken with my webcam since my scanner doesn’t capture the light very well): 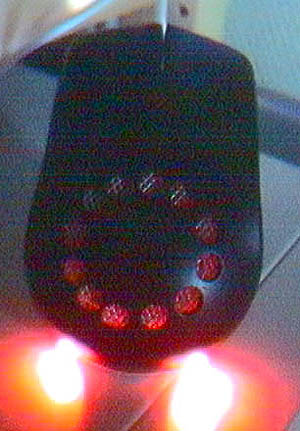 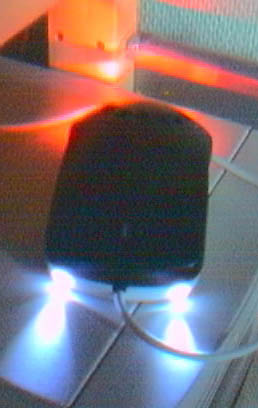 This is my “back-up mouse” running on my “back-up computer”, so I could afford messing up. But it worked perfectly and the result looks OK. A bit over the top with those LEDs, but it sure is different.

And I can always turn it all off with that switch… Should you do it? If you want to, go right ahead! It was fun, not too hard and a bit different. But, the usual stuff:

I take no responsibility for any damage to person or equipment resulting in following this article. You could damage the mouse, destroy the port on the computer, or injure yourself or anything like that. The important thing to remember is: Take you time, take precautions and be creative.

The Fall of AMD

(“Fall” as in season, not cessation. :)) The Inquirer has an article about AMD’s fall collection. Much of the estimated dating comes from Lynn Computer Products, which has a history of telling its customers when it can expect to see Read More

Oh, What A Tangled Web We Weave

AMD is supposed to demonstrate a four-way Sledgehammer Opteron at Computex in Taiwan. There’s a bit of a hullabaloo about what will be demonstrated. These won’t be introduced for close to a year. Running a four-CPU cluster is a good Read More

One computer shop which often puts good hard news on its site here in Moscow had run some statistics on o’cing Durons (after I had suggested to do that in a letter :). Here are the results (they have tested Read More