Hello, so lately my 6400 has been performing very poorly.
As you can see on the picture below, it only got a 442cb on cinebench, while before it got as high as 738.
Not only Cinebench, my fps in cs and league is also lower.
I'm not sure when this started, but it might have been that one time i hit my desk real hard and my pc froze, just screen frozen couldn't do anything, HDD activity light on.
Whatever quick restart, but it didn't boot up anymore. Thought that the HDD went out, but the mobo had the VGA problem light on, so i took everything out and put back in. Everything working again, didn't notice any odd behavior, but recently when i started playing CSGO again the fps was quite bad (dropping under 100 bad). So i ran some quick benchmarks and it seems there is a cpu problem.
Can anyone help me with the CPU, i already did a cmos reset and ocd everything again.

According to Cinebench your CPU is running at 2.72ghz. Maybe post up some shots od CPUz
It is possible that you dislodged the 212 when you hit the case and the CPU is throttling. Have you checked temps

Is Windows and CS:GO both on the SSD? 32gb would fill up fast with Win 10 alone. Might be running out of space if you have anything else on there too.
OP
K

It shows 2.72 because the 6400 is not actually unlocked and windows doesn't detect it or something, in bios it shows 4.5 correctly.
There is only Windows on the SSD, about 5gb free space so that shouldn't be a problem. 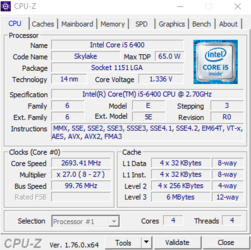 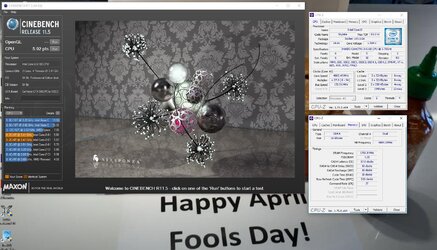 It seems like the OC isn't applying properly and i'm stuck on 2.7ghz.
When i ran it all on stock i got ~500 on cinebench (3.1ghz turbo)
I tried 2 different bios's. One didn't have the beta runner feature and couldn't oc at all and the other one which had always worked isn't working now.
Couldn't get a screenshot from the bios, but i hope this will do. 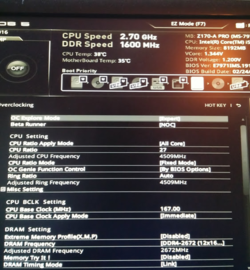 If you updated to a current BIOS and then went back to the old "OC" BIOS it may not work. Intel introduced a microcode update in the newer BIOS release that prevents overclocking on Non K chips.
OP
K

Yeah i am running that bios, it seems that something was preventing the oc. However i did a cmos reset, ocd again and everything is working now.
Thanks for the help 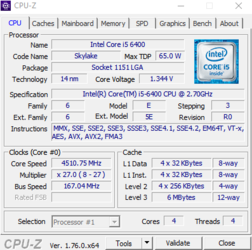 Some good info here. I just ordered that same CPU and MB, didn't even think about OC'ing with it. Any idea if the Intel update is shipping on new boards?

That I wouldn't know Jeff, I think it would depend on how quickly stock moves through your retailer. There are a few caveats with the "OC" BIOS, AVX2 and AES instructions are disabled and temp reporting is off. As an example XTU benchmark uses AVX2 and my i3 6100 scores better at stock than OC'd using the special BIOS since AVX2 is much faster.
You must log in or register to reply here.

T
Clarification on side effects of too low vcore