I mean, there's a lot of places to DL it (literally typed in office 2021 pro download to google)... just not sure which are on the up and up... Try this one?

Get it at a fraction of the retail price

You can legit DL it from MS with a key though...
OP

Thank you EarthDog for the link. But at MS website I only see office 365. Office professional plus 2021 no where to be found. Unless I am missing something. Can you please help me with a link to DL.

I'd imagine you follow the process for 365 and it gives you the option? I don't know.. I don't use it and when I go to the page it shows what I already have installed. You'll have to figure it out on your own from MS... sorry.

That said, I again ran across that same link in a help thread, so, DL it from there...


Also, look at the second response... it should all be right there for ya.
W

Just to add something. When you have a key then you enter www.office.com/setup , then add/sign-in with your MS account and in the next step use your Office key and then you get a download link. Alternative way is to enter your MS account and add new product, and then it will be on the list of all subscriptions.
There are no official Office download sites/links that you can use without MS account. So the only way is to use 3rd party link, or use MS account.
OP

EarthDog said:
I'd imagine you follow the process for 365 and it gives you the option? I don't know.. I don't use it and when I go to the page it shows what I already have installed. You'll have to figure it out on your own from MS... sorry.

That said, I again ran across that same link in a help thread, so, DL it from there...


Also, look at the second response... it should all be right there for ya.
Click to expand...

Wins 11 Pre installed MS 365 I don't want to deal with monthly subscription thing. Your early link above sell keys and provided a link to download MS office professional plus 2021. I DL and successfully installed Office Professional. When I open MS Word its prompt me to enter products key. I am all set.

The Office "Plus" suites are OEM products, so Microsoft is not going to offer that for download. I get these product keys from places like URCDkey-VIP and have sometimes asked their support team to provide a link for downloading the ISO installation file. But regardless, it will be a third party site that carries some risk. So far, I have not had any problems with doing this but I always make my own installer from the ISO file so I don't have to deal with a risky download site every time I do a new install on a computer.

Post magically merged: Sep 7, 2022
Here is one place you can get the ISO: https://retail.winandoffice.com/en/ms-office-2021-pro-plus/

It is a very slow download and I do not vouch for the trustworthiness of the site or the ISO file.
Last edited: Sep 7, 2022

Office 2021 Professional Plus is corporate product so you won't find Microsoft selling it retail.

Of course there are other sites out there that will sell you a Product Key for all versions of Office 2021 including Office 2021 Professional Plus.

Microsoft tries to hide it but if you scroll down to the bottom of the Microsoft 365 page you can find Office 2021. Microsoft sells Office Home and Business 2021 for $249.99. 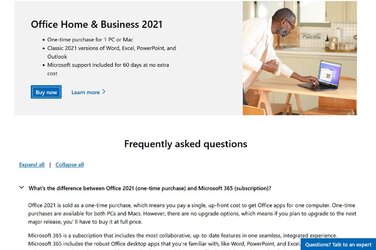 However, I didn't find Office 2021 Professional there. I had to do a Google search to find it.

Buy Office Professional 2021 for Windows or Mac. A one-time purchase gets you Word, Excel, and PowerPoint for lifetime use. Licensed for home or commercial use. Digital download from Microsoft Store.
www.microsoft.com

As I said, when you have a product key, then you can use retail downloader from MS site (my last post) and it will automatically generate you link to your version, but you have to be logged onto your MS account as all new licenses are signed to user's account (and activation is signed to a PC). I did that with Office 2021 Pro Plus from a "cheap" keys site. Alternative way is to add a product key to your MS account (the same where you activate other MS products/subscriptions like XBOX, Office 365 and others) and then you have download link in the subscriptions tab.
On the other hand I'm not sure how MS sees these cheap key stores selling their corporate edition products 90% cheaper than in distribution (I work in distribution and they cost more than OEM/Box versions). In theory selling these versions shouldn't be legal. The same things do people buying "infinite" (in real it's 50 or 100 right now, but used to be infinite) activation keys for corporations and selling them multiple times on auctions for ~$10-20. MS is hunting them, so I don't get how some legal-looking stores, with ads around the web, do the same on a larger scale. The main difference that I see is that keys sold on auctions are usually locked after a year or some more when there are too many activations registered on too many various computers. I haven't heard about problems like that from "cheap" key online stores.

MSDN is a Microsoft subscription for professionals. MSDN subscribers are allowed to install Microsoft products for development purposes. There is no set limit to the number of times they can do this with the same Product Key. I suspect some of these Product Keys are being sold online. The Microsoft online activation servers do not catch on to this unless the number of activations becomes excessive. That means as long as the people selling these Product Keys do not get too greedy and sell these keys too many times then there shouldn't be a problem.

I have heard of a few complaints from people buying these Product Keys and not being able to activate them. Sellers who are legitimate will then just give the purchaser a different Product Key.
W

Actually, MS changed rules about MSDN licenses and it depends on some other factors how many times you can activate it. At work, we have some licenses that can be activated 5, 10, or 20 times, and after that have to call MS support to unlock them. Some years ago there were infinite activations for Windows series or some other products. Right now only Windows Server and Windows 10 for Workstations can be installed more times. Every single Office 2016 and 2019 license from our MSDN could be activated on up to 25 different PCs (all are locked already). After that, MS servers are locking it and even support can't unlock it. I was talking with their support about it and they couldn't do anything.
Volume license packs have up to 100 activations so I guess that 3rd party online stores are using them and when they hit the limit then send another keys. When you buy some types of licenses then you get multiple MAK keys for 25/100 activations. I do not know if these largest subscriptions still have products with infinite activations, but smaller packs don't have them.
Retail/OEM licenses have 5 activations and after that you can call MS (automatic system) and unlock it up to 25 devices (so can call next 20 times).
Previously locked keys are sometimes being unlocked but it's rare. It happened with some Win7 keys maybe 2 years ago.

All new MS products are signed to the motherboards' IDs. It means that the PC = motherboard. The same for Windows and Office products. What more, during the activation, your retail key is changed to another key which is saved on MS servers. So even when there are too many activations on the retail key, then this license will work on the specific PCs on which it was activated first and in most cases you can reinstall the software, even when it's already locked on MS servers as it will match the original PC/motherboard and its ID. Another thing is that Windows that was already activated on a specific motherboard can be automatically activated after Windows reinstallation without providing a product key again, as the server will find the mentioned ID that is matching the motherboard. In laptops it's signed to the laptop ID/BIOS but on retail motherboards you can't really do that on the BIOS level while MS servers still have that info.
You must log in or register to reply here.