EDIT: AND WE HAVE 4 WORKING!

Okay. Now for the AIO. This is all on bare minimums so far. No cooler. No GPU. Only MB, CPU, and hard drives.

It's finally over... I think... I think I won for now. I think it was that bent pin. We'll see. I should probably get a new motherboard sooner rather than later.

I'm still seeing some odd behavior... the 3080 Ti's power LEDs flash every once in a while, but I'm going with wishful thinking that it's the iCUE software.

Cheer guys. Thanks for all the tips and following along. Gets those brain juices going. Appreciate it.

Time to jam out to some DJ's on Twitch and crush some Path of Exile. 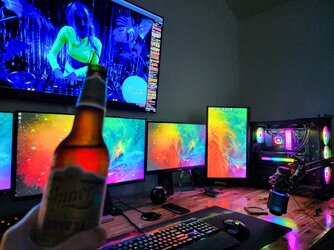 The 3080 Ti power LEDs flashing supposedly means it doesn't have sufficient power. Weird thing is that if I manually set the fans to any % (usually put them on 75) the flashing stops.

I was attempting to play Cyberpunk 2077 and kept getting hard reboots. Critical Kernal-Power ID 41 errors in event viewer. Not sure if it's that weird pin on the mobo or actually power issues. This has only happened while playing Cyberpunk. Only other two games I've played are Starcraft II and Path of Exile, no issues there for long periods of play time.

All temps look good, memory is hotter than I'm used to, but that's because they're 4 in there now instead of 2 so they cook each other a little bit.

I am taxing the system heavily with everything I have connected and run on it. I'm assuming at this point after several crashes 850W just isn't enough for the 3080 Ti to run with a second low profile video card, 6x 120mm fans, an AIO, 64GB of RAM and 3 SSDs.

I've purchased a 1000W SuperNOVA to test this and we'll see how that goes when it comes in next week. Wanted to go with 1200W, but they're nearly twice the price and EVGA has the G6 on sale with a $50 instant rebate for 179.

TechWizard said:
I've purchased a 1000W SuperNOVA to test this and we'll see how that goes when it comes in next week. Wanted to go with 1200W, but they're nearly twice the price and EVGA has the G6 on sale with a $50 instant rebate for 179.
Click to expand...

I finally got through this thread and PSU is what I was going to ask about. Glad you are already addressing it.

DaveB said:
according to reviews at Techpowerup, an i7-10700K can use close to 400W during gaming
Click to expand...

Not even close. Assuming you're looking at https://www.techpowerup.com/review/intel-core-i7-10700k/18.html that is SYSTEM power, not CPU power alone. Without OC I doubt the CPU by itself will sustain even half that under gaming.

If you think 850W is enough - why is it that only Cyberpunk causes the hard reboots? It's the only benchmark I have for "extreme" load for gaming. Nothing else hits the CPU and GPU nearly as hard.

Everything else so far is running better than before. No "Out of memory" errors yet. *knocks on wood*

I can't answer that. All I know is 750W worked just fine for a system that uses more power than yours.
OP

First hard reboot while playing SC2 so this is no longer just a Cyberpunk issue.

Still not sure why the auto-fan settings aren't working on the 3080 Ti. Every time I boot up I have to set the fans manually or it'll just cook the card.

I saw a suggestion on reddit to set "Power Management Mode" in the Nvidia Control Panel to "Adaptive", but I only get the options "Normal" and "Prefer Maximum Performance".

If the 1000W doesn't alleviate these symptoms then I'll order another motherboard. Disappointed with Gigabyte this time around, time to go back to ASUS unless someone has a better recommendation.

If the 1000W doesn't alleviate these symptoms then I'll order another motherboard.
Click to expand...

Sounds like a shotgun approach... the only reason I agree with this currently is due to the bent pin. (EDIT: But at this point, what else can ya do? )

Ask the card vendor what's going on. I assume you went through the basics of DDU old drivers and install new, right?
OP

EarthDog said:
Sounds like a shotgun approach... the only reason I agree with this currently is due to the bent pin.
Click to expand...

I'm tired of missing. I'm in a position where this isn't going to break the bank and I'm trying to put a second system together anyways.

I want to figure out what the hell is going on and resolve it fully.


EarthDog said:
Have you tried a fresh reinstall on the game? OS? Tried with RAM @ JEDEC/2133?
Click to expand...

Cyberpunk is a fresh install. I will have to try a reinstall of Windows even though this install is relatively new. I was running with the ram @ 2133 when I was having the problems with Cyberpunk. I am now currently running with an XMP Profile with it at 3200 - I put the voltage settings back on AUTO from 1.35v to see what the voltages would be running at, but that doesn't appear to make a difference as the XMP profile forces them to 1.35v


EarthDog said:
Ask the card vendor what's going on. I assume you went through the basics of DDU old drivers and install new, right?
Click to expand...

I'll see what EVGA says, but I expect that to be a dead end.

I did a full removal of the old drivers by manually downloading the new 3080 Ti drivers and doing a custom install. I did NOT rely on the "Nvidia Experience" to do it for me.

I did a full removal of the old drivers by manually downloading the new 3080 Ti drivers and doing a custom install. I did NOT rely on the "Nvidia Experience" to do it for me.
Click to expand...

1. A custom install through the driver only deletes the settings (from NVCP)... it is NOT a fresh install/full removal of the driver. Use DDU or TPU's tool and give that a whirl.
2. I'd stay away from GFE period unless there are features you use that you absolutely need from it. It's just bloatware. Really, if you don't use it, uninstall it and don't let the driver install. For enthusiasts, that program is more trouble than it's worth. If you're a beginner and want the hand-holding, it's a solid application.

If the EVGA GPU has a BIOS update, may want to look into that as well...(after you DDU and install NV drivers)
OP

1. A custom install through the driver only deletes the settings (from NVCP)... it is NOT a fresh install/full removal of the driver. Use DDU or TPU's tool and give that a whirl.
Click to expand...

:| I thought a "Clean Install" from the Nvidia Installer blew out the old driver. Learn something new everyday!

My fingers are crossed... but sadly, I wouldn't bet on that being the solution. It's still rare things get hung up enough. I've upgraded through 4/5 drivers at this point without a DDU. So it's only a last ditch effort type thing............
OP

Yeah. It made it worse. I can't even get into Cyberpunk anymore. As soon as I hit space to transition from the load screen to the actual game it just hard resets.

The fans actually kick on now automatically so that's "fixed" at least. It still lets the GPU get to 70C+ before ramping up the RPMs on the fans. I still feel better setting them to ~70-80% before playing something like CP2077.

I'll wait on the PSU - it's already in Fort Worth so there is a good chance it could arrive tomorrow instead of Wednesday.

Have you tried running a CPU stress test and a GPU test at the same time? That should be as bad as or likely worse than a game. If it's power, your system should trip up too (assuming it isn't a GPU issue).

My worst fear is it's a bad card. Praying it's an easy fix with a PSU not wanting to ramp up power or something else...
OP

Running a stability test in AIDA64 now - stressing everything but the local disks. 25+ minutes no hard reboot.

This only seems to happen during practical use, ie: gaming - and not during stress tests.

Is there another application you recommend that does CPU & GPU? 3DMark is always 30 bucks and the reviews over the years of having to pay for features like resolution changes, etc always put me off on buying it.

I think there is a better chance it is the motherboard given the state of the two pins and the previous issues I've had.

Next month I'll look at motherboards and an 11th gen i7 since I need one to even utilize the Samsung 980 at full speeds. If this still happens after that... then yeah. I'll be talking to EVGA about replacement.

The only reason I ended up with this Gigabyte board was because TX had it's worst winter storm in a century while I wasn't home back in February over Valentine's day weekend. By the time I could get back home the rolling blackouts killed my Z170, i7 6700K, and all 4 sticks of Vengeance LPX. Everything else survived. Motherboard availability was terrible and it was basically this board or a few others of lesser quality.

So there is also the chance that the rolling black outs affected the integrity of the PSU as well. I'm just not going to be 100% certain until I replace everything.

If I recall the Final Fantasy XV bench is free. It's not great for benching but I think it is fairly real world in terms of a gaming use case.
OP

OC-NightHawk said:
If I recall the Final Fantasy XV bench is free. It's not great for benching but I think it is fairly real world in terms of a gaming use case.
Click to expand...

Yep - about 2 minutes into the benchmark on 4K with High Settings I had a hard reset.

Nvidia forums kind of confirms that there are multiple cases where 3000 series cards are pulling more wattage then they are rated at. Based on the flashing lights when booting up signaling insufficient power and the nature of the reboots I'm hoping the 1000W PSU fixes the issue.

I'm done beating this dead horse for now.
You must log in or register to reply here.

M
Trying to unlock and overclock my HP 45L PC, however, many of the power settings are being locked/limited by HP. Is there a way to get around this?