Running a stability test in AIDA64 now - stressing everything but the local disks. 25+ minutes no hard reboot.

This only seems to happen during practical use, ie: gaming - and not during stress tests.
Click to expand...

That's why I specifically said to run a GPU test and CPU stress test at the same time. You aren't pulling nearly as much power with only testing the CPU.

Or hell, even try running Furmark (as much as I say not to) alone and see if it happens with the GPU.

... I get you're burned out though. Let's hope the new PSU just works!
OP

ADIA gives the option to run CPU and GPU at the same time. Or so that's what it seems. It had both the CPU and GPU at 100%... so thought I was doing that.

Not necessarily burned out - this just seems more like a marathon than a sprint at this point.

ADIA gives the option to run CPU and GPU at the same time. Or so that's what it seems. It had both the CPU and GPU at 100%... so thought I was doing that.
Click to expand...

Oh yeah....... I forgot about that, lol! I've honestly never used it and why I suggested 3DMark.

Do you have a Kill-A-Watt meter? Those are always handy to have, if only for giggles. But that would tell you how much power or if there is a threshold.

Try Furmark and see if you can get it to trip...if it's really power to the GPU, those lights should go ape and your system shut down quick-like as that use more power than anything (even with the lowered clocks to).

You can also try lowering the power limit on the card through software to like.......80% and see if it happens too... software (X1) tells you how much wattage the card is pulling (so does Hwinfo).

You have a highly overclocked FTW3 ultra... it's possible.

Don't think I have a meter on hand here. I'll have to dig through the tools that made it down to TX from Chicago.

I have lowered the power limit in the X1 Precision software to 75% - this still didn't stop it from throttling up past 90% in Cyberpunk. I'm pretty sure the hardware still overrides the software if it absolutely needs the power.

I'm pretty sure the hardware still overrides the software if it absolutely needs the power.
Click to expand...

That really shouldn't be. blips over the limit, sure, but 90% (15% above what you have the limit set to)........ that's odd. Mine doesn't do that. It stays with a couple of %. Hardware won't override software... otherwise, what's the point of setting a limit?? 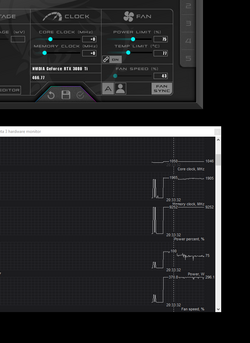 EDIT: Worth noting... not entirely sure WTH AIDA is doing with this GPU... if you look at Task manager, its like a 42% load... seems MEH!
OP

Moment of truth coming up... 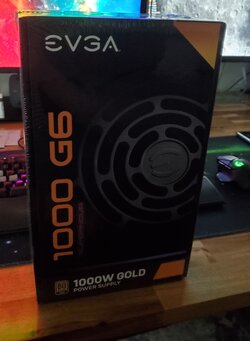 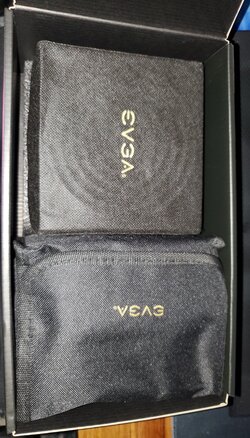 So far so good. Playing Cyberpunk a good solid 20 minutes with no issues... still need a lot more time to be sure this fixed the issue.

Trying to keep an eye on the power usage and as you (EarthDog) said, there are blips. Well mine regularly fluctuates between high 80s to above 100%.

The switch on the card itself is on "normal" and not OC - I honestly don't know what throwing it on OC does and wasn't worried about it since the auto-boost always worked and both 3080's I have topped 2000MHz with ease.

Here's a snap I got of when it jumped to 106%. I'll run some benches later and see if I can get a cap of it going higher. During intense action sequences it has gone as high as 115%. Maybe my 3080 Ti is just hella power hungry? 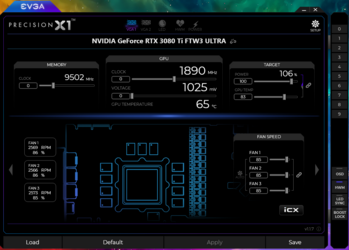 Hopefully that solves it. Of it does RMA that old PSU or trash it as it's bad.

Well mine regularly fluctuates between high 80s to above 100%.
Click to expand...

Of course it does. It's a game. The AIDA GPU stress test is a constant load and will peg your limit within a couple of percent. A game varies (depending on a variety of things). Apples and oranges in loads... can't compare the two.

Also, that isn't a snap of what's actually going on. You only show the slider. Look at the realtime graphs/monitoring and see what thise say. You set that to 106% somehow. Hit the DEFAULT button, perhaps.
OP

EarthDog said:
You set that to 106% somehow. Hit the DEFAULT button, perhaps.
Click to expand...

I did not set that. The power setting is the 100 in the box under power. The section where it shows 106% is the real-time value, that constantly changes and there is no way to edit that.

I set up Total Power, Clock Rate, Temp, and Voltage in the HW Monitor and I'll post a screen shot after playing a bit more.

I'll RMA this PSU for sure - it's less than a year old.
OP

Things look incredibly stable now. Starting to breathe a little bit of fresh air... still a little skeptical, at least until it's been running for a couple of weeks like this.

Thanks for pointing out the HWM - it does look like whatever it is displaying on the front page of VGA1 is trash. I constantly see spikes that are 105+, but they do not show in the HWM. Wonder what the point of showing that information there is, if it is so inaccurate? 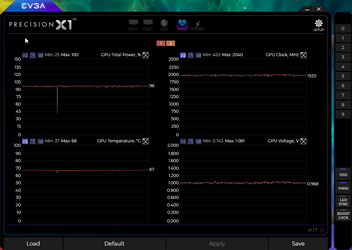 Oh yeah, I got brave and did a little bit further of an OC. Mem at 10K and pushing the clock past 2K.

I used MSI Afterburner earlier (yes it works with Evga cards). That app allows for a lot more to be monitored on the chart.

Maybe use that when you're chasing the power thing around.
OP

I just got done playing a huge stint of PoE (2pm Saturday through 6pm today)... kept the fans on auto the whole time to see how things would behave and everything went swimmingly well. This is the first time since the new PSU I haven't been running a game and noticed out of the corner of my eye that the power LEDs started flashing again with the fans on 0.

I turn the fans on manual and the flashing stops (has to be set at 10% or more to actually get the fans to start). :/ not sure what to make of this. It doesn't appear to be affecting performance and I usually set the fans to ~75% when playing intensive games, but still concerning nonetheless.

You might be right with the BIOS update - I'll check that and MSI Afterburner tomorrow after I've recharged. Manual fan operation will continue until then.

You should also reach out to whoever made the card and ask what's going on..... BEFORE you flash the BIOS.
OP

Yeah looking on the EVGA forums now before I put in an inquiry. Even if I wanted to flash the BIOS doesn't look like there is any other option than the default in my case.

"EVGA GeForce RTX 3080 Ti cards have only a few options, since they are shipped with the Resizable BAR BIOS. Also note that the 3080 Ti FTW3 cards are shipped with an "XOC" BIOS with a 450W power limit out of the box; simply switch over to the OC BIOS."

Guess I could just flick the switch on the card and see what happens.

Yeah, two different BIOS'. Not sure how the fans are supposed to perform on the XOC though.
OP

Some updates to keep up with logging troubleshooting.

3080 Ti started running on average 5C+ hotter than usual - not a big deal, but another glaring concern I might have a compromised card.

1.) Switched to OC - Fans now always on at 33% minimum - Idles at 44C... before was idling as low as 37... can't seem to do that anymore.
2.) DDU - installed newest drivers (496.13). No change on temps, but broke compatibility with my 730GT, keeps installing an extremely out of date driver for it.
3.) DDU again, reinstalled 472.12 - temps still higher than usual. Can't seem to idle under 44C anymore, even with the fans ON. Before they weren't running at all and idle temps were 40C or lower.
4.) Checked CPU temps - normal - 27-31C idle - no extra heat there.
5.) Checked case fans, all running normally.
6.) Installed MSI Afterburner, no idea how to use this effectively so will need to play with it some.

These changes were prompted by running Deep Rock Galactic tonight. Upon launching with the latest game update the GPU fans stopped running, card shot up to 92C which caused downclocking and frame loss to 17FPS.

Couldn't manually turn on the fans either. Rebooted, same result. Switching to OC BIOS on the card fixed this... but still higher temps than what I had the last few weeks. Also no more blinking power LEDs on the card.

Also got the notify for a 3060 Ti Ultra... impulse bought it for second build, which unfortunately pushes back new motherboard and CPU purchase.

And Earthdog, I KNOW I should ask EVGA WTF is up at this point I'm just having a hard time figuring out how to pitch this to them without getting the usual run around.
You must log in or register to reply here.

M
Trying to unlock and overclock my HP 45L PC, however, many of the power settings are being locked/limited by HP. Is there a way to get around this?