Our good friends at G.SKILL are hosting a massive overclocking event at Computex in just a few short weeks. The showcase will feature some of the best overclockers in the world attempting to break as many records as possible as well as a competition with prizes. G.SKILL will be partnering with ASRock, ASUS, EVGA, GIGABYTE, Intel, MSI and Samsung to supply the overclockers with everything they need to put on a show.

Taipei, Taiwan (23 May 2016) – G.SKILL International Enterprise Co., Ltd., the world’s leading manufacturer of extreme performance memory and gaming peripherals, is extremely excited to announce and host the two largest annual extreme overclocking events at Computex this year – the 5th Annual OC World Record Stage 2016 and 3rd Annual OC World Cup 2016. Gathering an all-star lineup of professional overclockers from around the world, G.SKILL is ready to rewrite overclocking benchmark world records with the newest hardware from the leaders of each field, including the top 5 manufacturers of performance motherboards, Intel, Samsung, and NVIDIA. Both events will be held at G.SKILL Computex Booth I0608, located at Taipei City’s Nangang Exhibition Hall, 1F.

The G.SKILL OC World Record Stage event is 5 years in the running and has become the biggest annual event in the overclocking community. This year, G.SKILL will join forces with five leading performance motherboard partners, including ASRock, ASUS, EVGA,GIGABYTE, and MSI, and will aim at breaking as many overclocking world records as possible using the newest and latest Intel® Core™ processors, NVIDIA GeForce GTX 1080 GPU, and G.SKILL DDR4 memory built with Samsung ICs.

“A very special thanks to our motherboard partners, Intel, Samsung, and NVIDIA for sponsoring the OC World Record Stage event,” says Tequila Huang, Corporate Vice President and Director of R&D, G.SKILL International. “With their latest products and G.SKILL DDR4 memory, we will be able to demonstrate the advanced performance of the latest computing technology.” 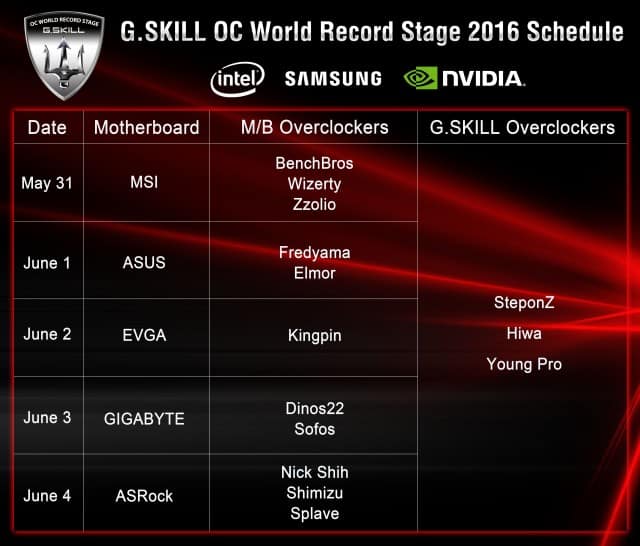 G.SKILL OC World Cup, now in its third consecutive year, offers the highest single cash prize in overclocking competition history and is one of the most celebrated annual overclocking competitions. The 6 contenders advancing from the online qualifier organized on HWBOT.org includes Dancop, [email protected], Hazzan, Splave, Wizerty, and Lucky_n00b, who will be showing off their legendary LN2 overclocking skills on a live stage and compete for a chance to win the title of OC World Cup 2016 Champion. On the fourth day, the top two overclockers from the live qualifier stage will duel head-to-head in the grand final stage on June 3rd, where the ultimate champion will walk away with the enormous cash prize of $10,000 USD. 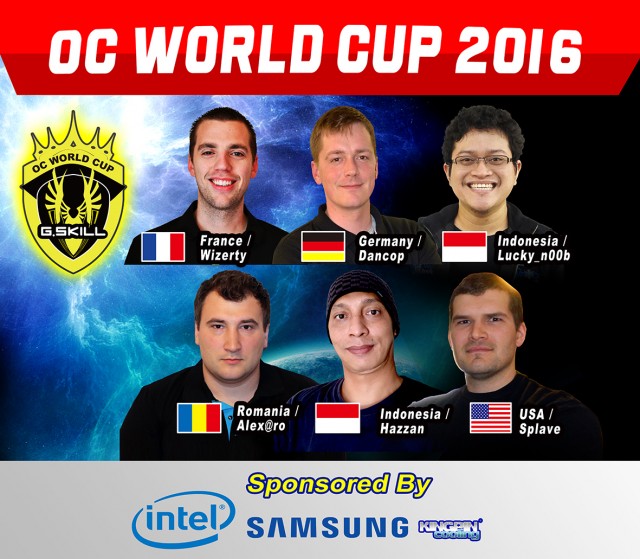 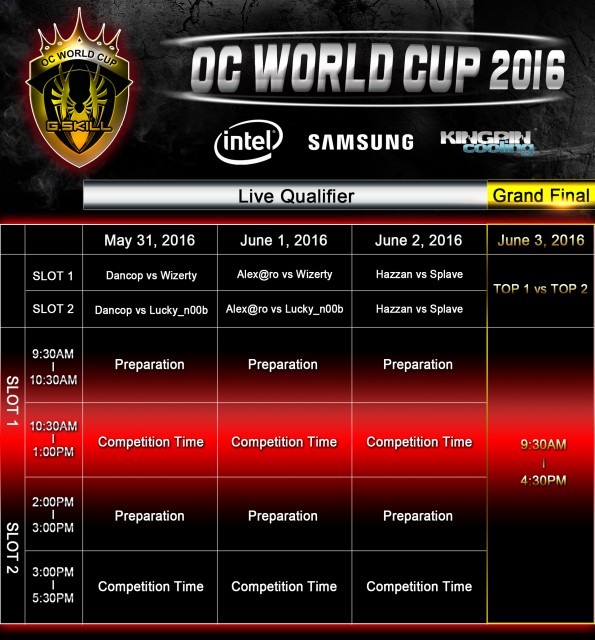 Stay tuned for further details, maybe even a link to livestreams of the event! More to come from the upcoming Computex convention.

G.Skill has recently released Sniper X DDR4 memory series. As with any new memory kit, we are interested to test it and see how it performs. G.Skill sent us a 16GB dual channel kit specified to run at DDR4-3600. It’s also the highest current speed of the Sniper X memory kits. The Sniper X is designed for gamers and computer enthusiasts so DDR4-3600 speed lands in the higher end of the sweetspot. Let’s take a look at specifications, features, and performance of the tested kit. Read More

G.Skill is clearly one of the most popular memory manufacturers, especially among computer enthusiasts, gamers and overclockers. At Overclockers we once again have a chance to check how much G.Skill has to offer as we test the TridentX 16GB DDR3-2133 CL9 memory kit. The TridentX memory series is designed for the most demanding users like extreme overclockers, so there is no place for cheap parts. You can expect to receive a high end product which you paid for. Read More